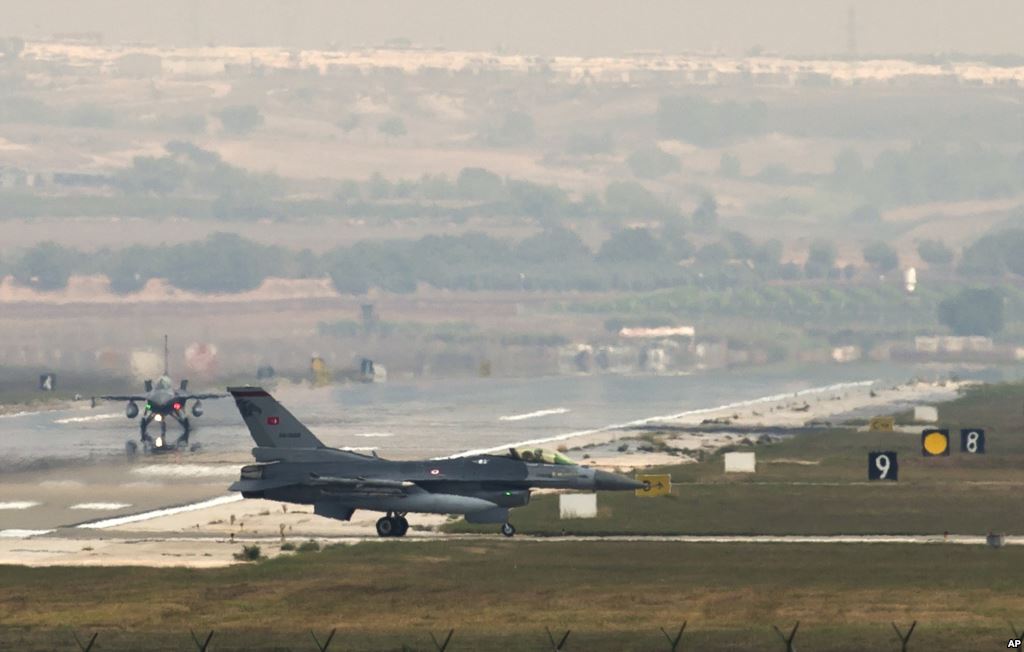 The Turkish Coup in Context: Redrawing the Map of the CIA Drug Trade

It’s been four short days since the July 15, 2016 coup d’état (color revolution?) attempt in Turkey, and already, the open-source research community is well underway in digesting what’s just occurred. President Recep Erdogan was quick to place the blame at the feet of his long-time political opponent (and likely CIA asset), a multi-billionaire “refugee” hiding out in the woods of western Pennsylvania – cleric Fethullah Gülen. Gülen, in turn, pointed the finger back at Erdogan, suggesting that the coup was staged for the express intent of centralizing authority.

However, the Erdogan v. Gülen feud isn’t what this article is about; at least not directly. There’s a lot for the curious Reader to sink their teeth into there – from the ever-mysterious Gülen’s activities running the largest chain of Charter Schools in America (funded in part by the Bill and Melinda Gates Foundation and currently under investigation by the FBI for money laundering) to Recep Erdogan’s love affair with NATO intelligence just a few years prior. Inquiring minds will quickly concede that this entire Turkish affair is (and has long been) a proverbial rat’s nest of Intelligencia and regime change.

Wherever the rats are scurrying, one’s likely to find some cheese close by – and the opium flows from Afghanistan bound for the Western world provide plenty of it. Buried among the headlines of the day was a story regarding Turkey’s Incirlik Air Base losing power during the attempted coup. When the lights came back on and the dust settled, Incirlik’s NATO-led “anti-Daesh” operations were given the continued green light, though the base’s Turkish commander remains in custody.

While many have been focused on the concerning amount of American nuclear warheads residing in Incirlik, its position as the drop-shipper of refined Afghan heroin bound for Western markets is equally pertinent. A politically uncertain climate in Turkey (to say the least) coupled with the general chaos of the region calls the future of NATO’s longstanding Incirlik drug-running operation into question – and that’s the finest wheel of Dutch Gouda the CIA’s had its mitts on since Iran-Contra.

Fortunately for the Agency (and correspondingly unfortunate for America’s nonviolent prison population), CIA’s “response” to this Turkish chaos has been anything but reactionary. In fact, their preparedness for such a contingency began in earnest years ago – to such an extent that the entire map of the CIA’s post-9/11 drug trade is being redrawn before our very eyes.

The Gulf of Guinea: The New(ish) and (not so) Improved MENA Drug Route

Readers of Stateless Homesteading will recall that back in November of 2015, we published an article detailing the significant uptick in heroin and cocaine trafficking coming from West Africa – an old route once used by CIA front-men Meyer Lansky and “Lucky” Luciano and their Operation Gladio partners in Lebanon, refined opium would make its way from the Middle East to New York via an airport in Accra, Ghana.

With the explosion of Nicaraguan cocaine stemming from Iran-Contra and the boom in Afghan opium that followed, West Africa’s place in Intelligence-backed drug-running has received far less attention in the modern era; that is, until reports began surfacing in 2013 regarding Accra’s Kotoka Airport once again being used for the smuggling of cocaine and heroin. West Africa, after a decades-long hiatus, finds itself in a position of prominence in the international drug trade – ensnared not by the grip of Operation “Gladio A” and the CIA mob syndicate that supported them, but Operation “Gladio B” and the CIA-backed Salafist boogeymen known as “Al-Qaeda in the Islamic Maghreb” (AQIM):

Unsurprisingly, the “refreshed” heroin and coke-smuggling syndicate in Ghana includes at least some amount of sponsorship from officialdom, as the former President of Ghana, John Atta Mills, voiced public concerns that elements of his own administration were involved in the trade. He is now deceased. His predecessor, President John Kufor (2000-2008) shared similar concerns, with cables suggesting “suspicions of widespread corruption, including instances where airport security was suspected of tipping off smugglers.”

In other words, 2013 was not the beginning of the CIA’s West African operations – it was instead the boiling point at which pressure had to be relieved through limited public exposure. With a major scandal from “leaked” US Embassy cables detailing the Ghanaian police’s wholesale cooperation with the drug operation, it was nothing short of a declaration of ownership – a coup d’état in its own right: As a major port for drugs bound to the UK, US, South America, and Western Europe as a whole, Ghana has been actively redesigned over the past decade as NATO’s “backup” of sorts for Incirlik Air Base, with increasing fervor towards this aim beginning in 2013.

Ghana is hardly an “ideal” terminal for would-be drug-runners, though; geographically, it’s farther out of the way from opium producing regions and farther still from target “consumer” markets than the Turkish operation currently is. And as the “Grand Chessboard” in the MENA region is still in the process of being flipped, NATO control of these producing regions generally seems tenuous. In addition to its geographic inconveniences, one of Africa’s chief “illicit” crops, cannabis, is proving increasingly unprofitable in an age of Western legalization and decriminalization.

But if a lone blogger can put that much together, the CIA is certainly aware of West Africa’s shortcomings. Opium, as the British learned over a century ago, is the most suitable drug for the aims of population control and Empire. The loss of Afghanistan, currently the world’s largest producer of opium, would seemingly be a critical blow to NATO and its “Third British Empire.”

Of this, too, the CIA is keenly aware, as our story now makes a Transatlantic voyage to the Mexican State of Guerrero. Previously, the impoverished Southern Mexican countryside had only a meager affiliation with heroin production. This has all changed in just a few short years.

While NAFTA’s Globalized push for Big Ag “fair trade” fruits and vegetables has hardly served to assist the American or Mexican “working man,” its drug trade certainly has; Mexico, by geographic necessity, is a key trafficking route for Central American cocaine headed to America, as Barry Seal, Oliver North, and a slew of Deep State agents learned during Iran-Contra.

So, too, was this lesson learned by the victims of the crack-cocaine epidemic of the ’80s and ’90s.

And while “Peruvian Coke” may catch more headlines, Central America has also been (to a lesser extent) a heroin producing region. Previously growing only low-quality brown and black tar heroin, the Central American product was far less preferable compared to Afghan white heroin from the Central Asian Caucasus or poppy from Southeast Asia’s “Golden Triangle” of similar quality.

But quality heroin has done a bit of “Globalization” in its own right, as such “good dope” is no longer the purview of Eastern regions exclusively. Shortly after Colombia and neighboring nations stepped up production of high-grade white heroin, Mexican Cartels (spearheaded by the Sinaloas) abandoned their position as lowly black-tar producers and middle-men, turning Guerrero’s staple cash crop from avocados to poppy in just a few short years: Some have even speculated that this global heroin explosion and corresponding quality increase is due, in no small part, to the emergence of Genetically Modified poppy plants. While hard evidence of this claim remains elusive, in a world where even GM yeast has proven effective in producing opioids, the thought can hardly be dismissed outright.

Speculation aside, the CIA’s own “World Factbook” of 2016 not only notes that Mexico is currently the world’s second largest opium producer behind Afghanistan, but that its dramatic rise in poppy production is “statistically significant” at a 31% increase from 2008 to 2009, the last year the CIA provides such information. As no researcher I’ve yet come across, CIA goons and their MSM lackeys included, has successfully disputed the work of late journalist Gary Webb in cataloging the Agency’s wholesale control over Central and South American drug cartels, I’m left only to conclude that these “World Factbook” statistics are as much the CIA’s personal ledger as they are a PR initiative:

via the CIA World Factbook

Considering this uptick in heroin production from Southern Mexico corresponds with the timeframe of the now-infamous DOJ gun-running operation known as “Fast and Furious,” the parallels to Iran-Contra couldn’t be more blatant. Though I’ve paraphrased Mark Twain before, the quote remains as applicable as it is timeless: History may not repeat itself, but it sure does rhyme.

This investigation started with questions about the future of the NATO-backed drug terminal run out of Incirlik Air Base amidst ongoing political instability in Turkey; and while this author has succeeded in documenting CIA’s longstanding “alternative” to Incirlik being rapidly built up in West Africa as well as the fever-pitch of development to turn Southern Mexico into the next Northern Afghanistan, I must confess that I do not know exactly what this spells for the future of Turkish regime change.

Unfortunately, I don’t have the answer to this question – but I bet a fly on the wall at last week’s meeting between John Kerry and Vladimir Putin could shed some light on the situation. Perhaps the Queen of Color Revolution herself, Mrs. Victoria “Fuck the E.U.” Kagan-Nuland, could be on standby for color commentary, as her timely visit to nearby Cyprus discussing the future of Turkey in NATO mere days before the Turkish coup took place is interesting timing, indeed.

One thing, however, is certain: Whether or not NATO retains overt control of Turkey (and even Afghanistan), the international intelligencia responsible for the black market drug trade are more than ready for whatever comes next, up to and including a complete rebalance of power as the region currently knows it. If such meticulous preparedness in bolstering this CIA “cash crop” isn’t evidence of foreknowledge of coups, counter-coups, and purges of all colors in the Turkish political landscape, I don’t know what is.

The extent of that preparedness, nothing short of the complete reinvention of the Western drug trade, also raises far more questions than it does answers. The undertaking of such a monumental task doubtlessly spells correlating monumental changes for the Middle East, a concerning prospect for a land already drenched in decades of blood and Empire.

Like you, Reader, I will be watching for such changes in the coming weeks and months, as I suspect we won’t have to wait long to see these schemes come to fruition.

Blogging under the pseudonym of Rusticus, the author and freedom activist operates a website tracing the machinations of the Anglo-American Establishment throughout history while simultaneously documenting the process of creating a truly off-grid homestead. (www.statelesshomesteading.com)