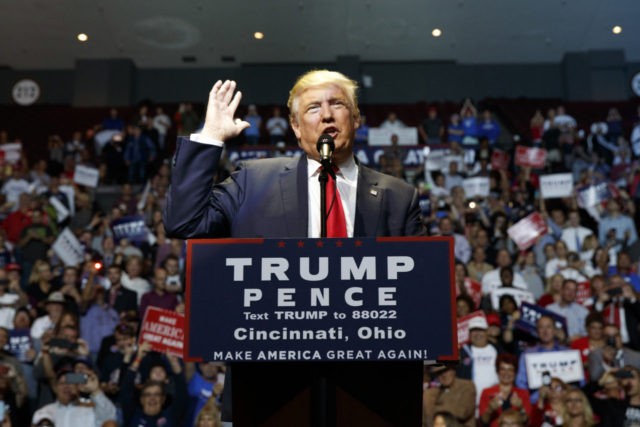 Trump tweeted Monday about a poll showing him leading Hillary Clinton 48 to 44 in Ohio. A Trump win in Ohio would be massively significant in the history of the Republican Civil War, because it would prove that Trump supporters are capable of carrying a swing state in the general election with no help from the party establishment.

“Mr. Borges stayed with [the Kasich presidential effort] to the end,” Trump-supporting state party Central Committee member Ann Becker told Breitbart News. “I think Matt was hoping there would be something done on the floor of the convention” to nominate Kasich over Trump.

Despite supporting Trump for a while in public, Becker said that Borges “about two weeks ago he did a 180 and said he doesn’t know if he would even vote for him himself. So I asked him myself, and Matt said I’m not sure” if he would vote for Trump.

Becker said that her county office in Butler County doesn’t have needed resources from the state party, including phones.

“People want to make calls and do phone-banking but we don’t have any phones,” she said. “It’s been a frustrating couple months.”

“Mr. Borges was hired to do a job, elect Republicans. And he is not helping to elect the top Republican on the ticket.”

Asked if Trump supporters will fight on in defiance of the state party, Becker said, “Oh yeah.”

There has been suspicion that the ORP has been using fake Twitter accounts to not only attack Democrats and the press but also other Republicans. And now there is proof!

…The ORP was outsmarted by a smart phone. Eagan’s attempt to smear Paduchik was exposed right through her contact card in an iPhone.

Other ORP alumni who recently worked for John Kasich’s Super Pac has been attacking Paduchik on Twitter also. Dave Luketic tweeted using the #ImWithMatt hashtag to disparage Paduchik as well. Except, Luketic probably should look at history as Paduchik successfully ran campaigns in 2000 and 2004 for Bush-Cheney in Ohio and Rob Portman in 2010.

Breitbart News reported that the state party’s Central Committee has given stand-down orders, instructing campaign staffers not to help Trump in at least two major counties:

The Trump campaign has had enough.

Trump’s Ohio campaign chief Bob Paduchik wrote a letter to the state party on Trump-Pence stationery cutting off all ties with Borges and accusing him of trying to get elected chairman of the Republican National Committee while sandbagging Trump.

“The Trump-Pence slate of electors was unanimously approved by the Ohio GOP State Central Committee on September 9th and it has been disappointing that Chairman Matt Borges cannot support that decision,” Paduchik wrote.

This past week Chairman Borges conducted a self-promotional media tour with state and national outlets to criticize our party’s nominee. I have no idea what game he was playing. Some Ohio Republicans have described it as disgraceful, I find it utterly bizarre.

I spoke with Mr. Trump on Thursday and he is very disappointed in Matt’s duplicity. Mr. Trump told me, “this is why people have lost faith in the establishment and party leaders.”

It’s no great secret that Chairman Borges was never fully on board, but his actions over the last week demonstrate that his loyalties to Governor John Kasich’s failed Presidential campaign eclipse his responsibility as Chairman of the Ohio Republican Party.

Paduchik vowed to fight on with the help of county party chairs operating below the state party level.

“At the Lucas County Victory Center for Trump,” Zawistowski said. “They’re literally telling people, don’t take Trump materials with you when you go out door to door.”

“The guy is literally a thug,” Zawistowski says of Borges.