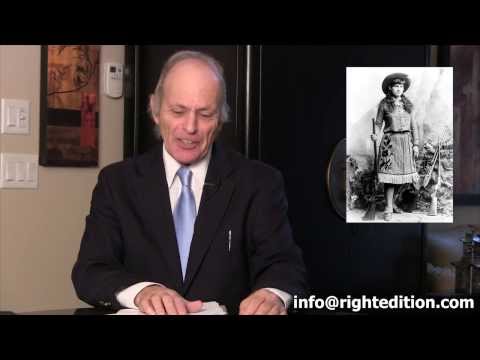 Annie Oakley
Annie Oakley was the stage name of Phoebe Ann Moses, a sharpshooter whose skill at shooting led her to star in Buffalo Bill’s Wild West show and made her a national celebrity. She won numerous medals for her marksmanship, performed for royalty, and remains a legendary figure of the American West.

She was born August 13, 1860, to Jacob and Susan (Wise) Moses, Quakers who had migrated from Pennsylvania to a rented farm in Darke County, Ohio, a rural county on the Indiana border. Called Annie by her sisters, she was the sixth of seven children born to Susan Moses. In 1866, her father died of pneumonia. Her mother, unable to support her children, sent Annie to the live at the Darke County Infirmary—the county poor house—when she was 9 years old.
Annie Oakley had not been born in the West, and she had not lived there. But for many years she had certainly looked like a cowgirl, and she had ridden a horse and shot better than most any Westerner, of either sex, while performing in Wild West shows. To call her, then, a ‘Western legend’ does not miss the mark…even if she was too good, and too good a shot, to shoot anyone.

Dave Wilson is white. But to win a seat on the Houston Community College Board of Trustees in a district that is predominantly composed of African-American voters, Wilson, a conservative Republican, led voters to believe he was black.
According to CBS affiliate KHOU-TV, Wilson’s direct mail campaign included a flier with smiling black faces he says he found on the Internet. “Please vote for our friend and neighbor Dave Wilson,” the accompanying text read.
In another flier, the text said he had been endorsed by Ron Wilson, a popular black former state representative. But the Ron Wilson who endorsed him was Dave’s cousin Ron, not the ex-lawmaker.
“He’s a nice cousin,” Wilson told the network, chuckling. “We played baseball in high school together.”
Nevermind his cousin lives in Bloomfield, Iowa, about 940 miles from Houston.
On Tuesday, Wilson defeated Bruce Austin, the 24-year incumbent, by a margin of just 26 votes.
Austin, who is African-American, called Wilson’s tactics “disgusting.”
“I don’t think it’s good for both democracy and the whole concept of fair play,” he said.
“He never put out to voters that he was white,” Austin said in a statement to the Houston Chronicle. “This is one of the few times a white guy has pretended to be a black guy and fooled black people.”
But Wilson, who won a six-year term on the nine-member board, is unapologetic.
“Every time a politician talks, he’s out there deceiving voters,” Wilson said.
Austin said he would seek a recount, but Bob Stein, a political scientist at Rice University, believes the vote will stand.
“I suspect it’s more than just race,” Stein said. “The Houston Community College was under some criticism for bad performance. And others on the board also had very serious challenges.”

The court found a three-year prison sentence to be “cruel and unusual punishment” for a first offence.
The problem, the court says, is that the current law does not discriminate. For example, a person keeping a restricted firearm with ammunition in their cottage when their licence requires it to be stored in their home would face the same minimum sentence as a person on the street with a loaded gun in a back pocket and the intent to use it.
The court says the ruling has no significant effect on sentences for people engaged in criminal conduct or who pose a danger to others, saying they should continue to receive sentences to emphasize deterrence and denunciation.
The Appeal Court heard six appeals together in February because each involved a constitutional challenge to a mandatory minimum sentence for various firearm offences.