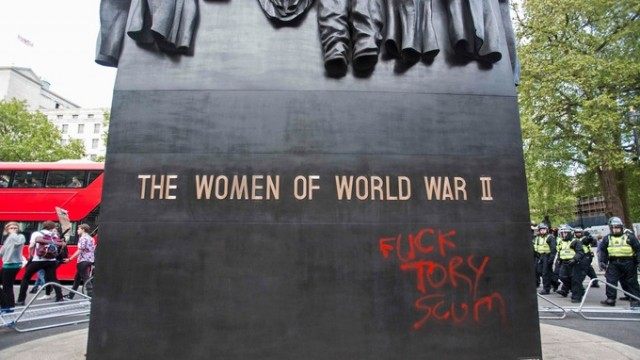 Caring, Sharing Lefties Get Their Hate On After UK Voters Dare To Ignore Them Caring, Sharing Lefties Get Their Hate On After UK Voters Dare To Ignore Them

Members of the political right are evil. Not only do they eat babies, steal from OAPs and reek of sulphur, the right has the hide to steal elections from people with a mandate on fairness and righteousness in the conduct of civil affairs; those on the caring, sharing political left. Well, that’s what we’re always told. Since the election there has been no shortage of examples of how the morally superior left conduct themselves in the wake of a major political thrashing.

On Sunday we saw deluded lefties trash a memorial to the fallen women of the second world war. This came after Socialists marched on Conservative Campaign Headquarters waving a collection of lively placards and before multi-millionaire Charlotte Church let forth with her own brand of hypocritical political venom.

Now we are seeing more acts of outspoken compassion by those dedicated to smashing the corporatist hegemony. Seems coffee drinkers of the political right have been singled out for special attention.

Then there’s this little slice of polite dissension again from the caring lefties. Matt Woodruff, the owner of Woodruffs Yard in Lewes, told the Guardian (of course) he was moved to vent his political views on his shop’s blackboard after the Conservatives took a local seat that had been occupied by the Lib Dem former Home Office minister Norman Baker.

The sign – see below – proposes a “Tory tax” of 10% on any customer who voted Conservative as one of the “‘tough’ decisions I need to make to ‘balance the books’ under your preferred government”. The sign also says UKIP voters should “shop elsewhere” – because they commit the terrible sin of disagreeing with a committed lefty.

Don’t you just love it?