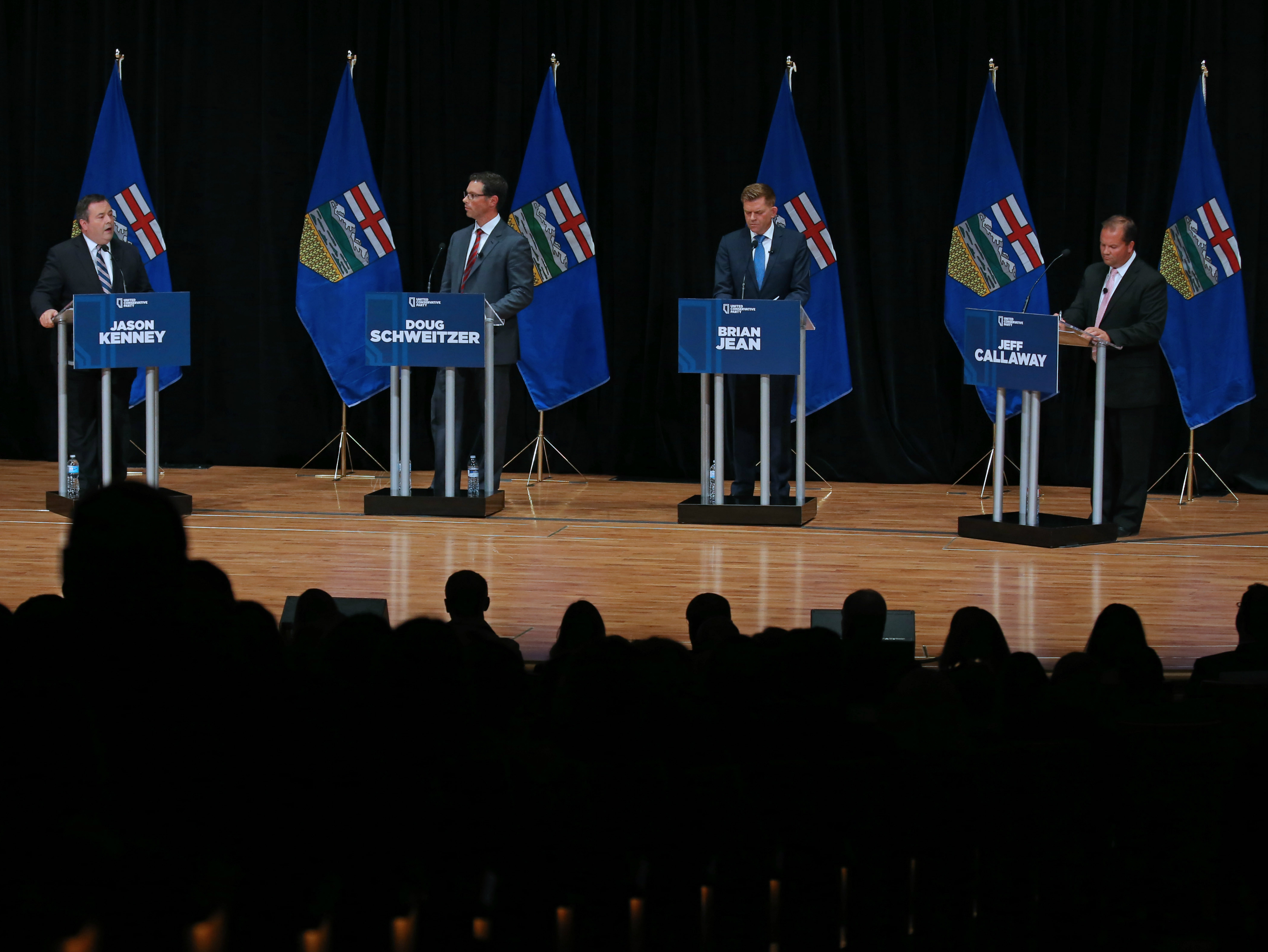 If Alberta opts for a Conservative premier in 2019, the rest of Canada should brace itself for for an era of constitutional wrangling and inter-provincial conflict unseen since the 1970s.

All four potential leaders of the newly formed United Conservative Party — the product of a union between the province’s Progressive Conservative and Wildrose parties, and the most likely threat to NDP premier Rachel Notley’s reelection — have spent the campaign to date taking hard lines on trade, taxes and everything Ottawa. During the first debate between leadership candidates last week, a packed hall of revitalized provincial conservative die-hards cheered loudest when the candidates promised trade wars and constitutional legal battles.

Responding to a question about the beleaguered Trans Mountain Pipeline, for example — which B.C.’s new NDP government has vowed to oppose — Calgary lawyer and would-be UCP leader Doug Schweitzer threatened to kick B.C. out of the New West Partnership Trade Agreement, and bellowed: “Our economy is stronger than B.C’s. If they want to get into a trade war, bring it on.”

Our economy is stronger than B.C’s. If they want to get into a trade war, bring it on.

Former MP and federal cabinet minister Jason Kenney, the race’s front-runner, and former Wildrose leader Brian Jean have also proposed using an arcane Supreme Court of Canada ruling to force a re-negotiation of the federal equalization program, which transfers money to “have-not” provinces with the intention of assuring equal levels of government services across the country.

As Alberta continues to suffer an oil-bust economic downturn, a Conservative premier would rankle much of the rest of Confederation on behalf of a province increasingly embittered by pipeline politics. It’s the kind of muscular approach employed by premiers like Peter Lougheed and Ralph Klein, both of whom maintain a kind of mythical status in Alberta for their willingness to square off against Ottawa and the other provinces.

There’s certainly an opportunity for a Conservative Albertan to flex his or her muscles. The environmental movement is intractably opposed to the development of Alberta’s oil sands, opposition from other premiers to pipelines like Trans Mountain and Energy East threaten Alberta’s ability to sell its oil in the U.S. and abroad. Meanwhile, under Justin Trudeau, the National Energy Board has expanded its mandate, stating that it will consider both upstream and downstream greenhouse gas emissions as part of the regulatory process.

The change at the NEB was sold as a bid to gain the kind of “social license” necessary to earn Alberta’s oil industry the good will to expand; current NDP premier Rachel Notley has also invested in this more conciliatory approach, adopting a hard cap on greenhouse gas emissions in the oil sands and introducing a carbon tax. But from the Conservative point of view, the quest for social license has proved fruitless; if B.C., Ontario and Quebec continue to oppose pipeline construction, and the federal government proves unwilling to use its powers to make the projects happen, there is little reason for Albertans to play nice.

And that is where Kenney and Jean’s constitutional threats come into play.

“In 1998, the Supreme Court of Canada made a decision in what is called the Quebec Succession reference in which it determined that if a province holds a referendum on a constitutional question and if it is adopted by a clear majority on a clear question, there is a binding constitutional obligation on the federal government to negotiate that issue with the relevant province,” Kenney said after last week’s debate. “If the federal government pursues a tax on our energy industry — the carbon tax — if it doesn’t roll back the NEB’s outrageous expansion of its mandate, and if it refuses to fundamentally change the equalization formula in 2019 I would be prepared to hold a referendum.”

It would be a chance for those arguments to be put on the table, and who knows.

According to several legal experts, this is no mere idle threat. But constitutional law is more complicated than soundbites allow, and the real question is whether triggering such a referendum would amount to anything more than a temporary legal headache for the federal government.

To craft this proposal, Kenney relied on a paper published by retired University of Calgary political science professor and former Alberta cabinet minister Ted Morton, who said a referendum would likely force the federal government to negotiate on a constitutional issue in good faith. However, Morton concedes, a negotiation doesn’t mean that that Ottawa would be forced to cede any of Alberta’s demands; additionally, any actual changes to the constitution would require the support of seven provinces containing 50 per cent of the population, as per the amending formula.

“It would be a chance for those arguments to be put on the table, and who knows. Justin Trudeau might see opportunities for some reform,” he said.

While the principle of equalization is enshrined in the constitution, the actual formula by which the transfer is calculated is a matter of federal legislation, and one that is up for review in 2019. The mere threat of a constitutional renegotiation might be enough to earn Alberta some concessions.

Even if it did, however, University of Calgary economist Trevor Tombe warns that there is no likely new equalization formula that would make any substantive improvements to the red ink on Alberta’s balance sheet.

Even if Alberta were able to exclude resource revenue from the equalization equation, “we have the highest level of fiscal capacity of any province,” Tombe said. “I think there’s lots of sensible changes that could be made, but Albertans shouldn’t be under the illusion that it would improve our own fiscal situation. Changing the formula affects how equalization funds are allocated among have-not provinces, and we are not going to be a have not province.”

In short, all this bluster from Conservative candidates would likely amount to little more than political theatre. But what theatre it could be.