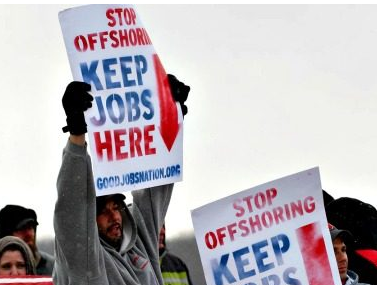 This week, Trump called on Barra to reopen the recently closed GM Lordstown assembly plant. The closing of the plant resulted in the immediate layoff of about 1,600 American workers and since 2017, about 4,500 American workers in Ohio have lost their jobs at GM.

“Just spoke to Mary Barra, CEO of General Motors about the Lordstown Ohio plant,” Trump said in a tweet this week. “I am not happy that it is closed when everything else in our Country is BOOMING. I asked her to sell it or do something quickly. She blamed the UAW Union — I don’t care, I just want it open!”

In response, the UAW is standing with Trump, asking that the populist president be involved in negotiations between GM executives and the union workers to get the assembly plant reopened — a move that would save the Lordstown area and surrounding communities from economic decline.

UAW officials wrote on Twitter a “Thank you” to Trump for standing with the laid-off American workers in Lordstown, and wrote that “Corporations close plants, workers don’t” in response to claims from Barra that the plant was idled because of union workers.

Thank you, Mr. President, for fighting alongside the UAW against @GM. We will leave no stone unturned to keep the plants open! https://t.co/ZXx90HCRSF

So-called “industry experts” have blasted Trump and the UAW’s effort to include the president in negotiations to reopen the Lordstown plant, arguing to the Detroit Free Press that GM executives will not be pushed into a decision.