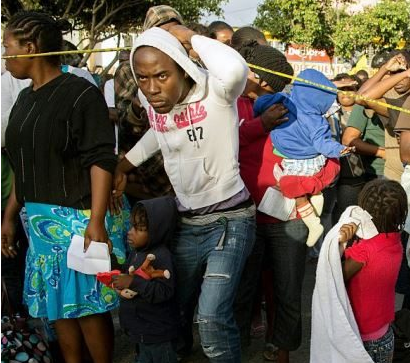 Hundreds of African migrants gathered on the Mexican side of the bridge that separates Laredo, Texas, from Nuevo Laredo, Tamaulipas, on Monday.

A large group of African migrants gathered on the south side of the Laredo Port of Entry to protest U.S. immigration policies that are keeping them from entering the U.S. to claim asylum, KGNS reported. The group claims that “not enough is being done” to help them get asylum into the U.S.
The large group of African men, women, and children held their ground near a Mexican customs office. Mexican officials eventually spoke with the group to explain the situation. Some of the migrants held a private meeting with Mexican customs officers. The group claims they are unable to meet with U.S. Customs and Border Protection officials. They claim that Cuban migrants are being given preferential treatment.

U.S. resources for dealing with migrant asylum claims are being overwhelmed by the massive numbers of Central American migrant families who are, as Acting U.S. Immigration and Customs Enforcement Director Matthew Albence told Breitbart News, “gaming the system” to gain entry.

Approximately 13,000 mostly Central American migrant families and unaccompanied minors are currently camped on the south side of the U.S.-Mexico Border, Breitbart News reported.

In an article written for Breitbart News, Kansas’ Former Secretary of State Kris W. Kobach wrote, “We are providing huge incentives for migrants to enter illegally and walk up to Border Patrol agents to demand a ride to the Border Patrol stations so they can make what is likely a bogus asylum claim. We know the claims are likely to be bogus, because the overwhelming majority of these migrants are denied asylum when their hearings eventually occur.”

Despite this, the Associated Press reports that 13,000 migrants are camped out in eight Mexican border communities, waiting for their opportunity to enter the U.S. and make a claim for asylum. The largest numbers are in shelters in Tijuana (4,800) and Ciudad Juarez (4,500). The remainder are scattered by the hundreds in Mexicali, San Luis Rio Colorado, Nogales, Piedras Negras, Reynosa, and Matamoros, the AP stated.

In response to the protests of the African migrants waiting in Nuevo Laredo, U.S. Customs and Border Protection officials released a statement published by KGNS.