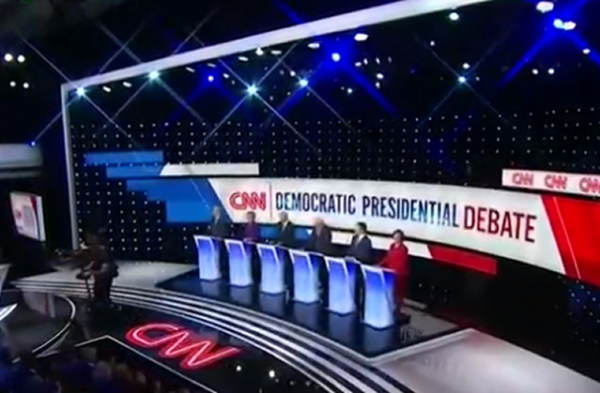 What a mess the Democrats have got themselves into.  Barack Obama and then Donald Trump have destroyed the Democrat Party.  Democrat Presidential candidates are such a joke and is there any doubt that President Trump would love to run against any of them?

The Democrat Presidential candidates are a joke.  Two candidates are billionaires and are trying to win the election by buying it.  Former New York City Mayor Michael Bloomberg is short, so short he wants something to stand on.

WE the Short People’s Delegation don’t approve of him using a box 📦 pic.twitter.com/OR3jFbqQts

The other billionaire is Tom Steyer who wants to shut down the US energy sector so he can make more money.

The candidate who won Iowa is mayor from a small Midwest town and no one yet is talking about his terrible eating habits – he’s an animal!

We are not talking nearly enough about how Pete Buttigieg consumes food pic.twitter.com/gjOgnVDdNL

Former Vice President Joe Biden has been in three Presidential elections and he’s never won a single primary but he is leading the national polls at this time.  He is more senile this time around and is having problems pronouncing words.  Joe should really sit this one out:

Just saying that in three presidential bids over three different decades, Joe Biden has never won a caucus or a primary. Not one.
And Dems still give him millions for his campaign

Senator Bernie Sanders is a communist and open socialist:

Bernie Sanders has said nicer things about Fidel Castro than he has our own President.

We don’t need a communist sympathizer in the White House. pic.twitter.com/olVGFXnyOP

Senator Elizabeth Warren, who claims to be a Native Indian (and she’s not), has been referred to as Pocahontas.  Unfortunately Pocahontas County in Iowa was not impressed with her ‘native heritage’ as she placed 5th there in the recent caucus:

The funniest thing that happened in the whole Democrat Iowa debacle was Elizabeth Warren getting 5th place in Pocahontas County. 😂😂😂 pic.twitter.com/zRd9NQre1L

There are a couple of others running but no one knows who they are either.

Oh, and they want to beat President Trump and his resume of historic economic accomplishments and foreign policy wins.