The situation for Euro-Canadians is dire. We have a hostile government that is determined to replace us. Our institutions have been conquered by our enemies. And, every year our deaths outpace our births and foreign intruders continue to flood into our country.

A lot of people will say “well, who cares. This isn’t really even our country. It belongs to the aboriginals”. And my answer is: “we’re losing our ancestral homelands as well.”I’ve spent the last couple of years reading books about the immigration disaster in Europe and the new world. The image below includes some of my favorites. I included one about the collapse of Rhodesia because the author’s central thesis is that Rhodesia was not lost because of war, but because of birth rates. The settler elite simply did not have demographics on their side. So, just as with the Mau Mau of Kenya, the white man was eventually pushed out of Rhodesia. 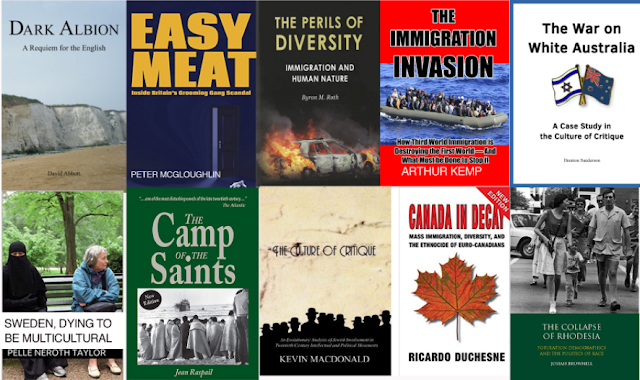 But, reading books wasn’t enough. I wanted to see first hand examples of the immigration nightmare.

So, I started watching music videos made by immigrant descended youths in Europe. The results of my research and some of my thoughts are shared in this essay. I hope this will give a little bit of insight into what we as Europeans are dealing with on a global level.

The first music video linked below is Pa Saliu. He’s Gambian-Brit but from the way he talks you can tell that he has picked up Jamaican (or what they call in the UK “Yardie”) slang. In the video he is wearing a tracksuit, walking a menacing looking pitbull, and talking about robbing “bandos”. Bando is an African-American term that means an abandoned house. Often after the commission of a burglary a home will be burned. If the building stays empty it becomes a “bando” (meaning abandoned house) and becomes a place for clandestine drug distribution. He makes a living robbing those drug houses.

The American youtuber Charliebo313 makes very good drive through videos of American slums. You can see from the video below the number of abandoned tenements. Those are the “bandos” that rappers in North America and now Europe talk about in their music and they fill an important role in the illicit drug economy. The video below is from Baltimore during the COVID quarantine. On both sides of the street you can see boarded up buildings. Those are “bandos”.

Baltimore is looking pretty rough. It is a city that has gone through the full demographic and cultural replacement. The people that built the city are gone and what is left is an underclass culture of welfare dependence, gangsterism, and “bandos”.

The image below is of Baltimore before “multiculturalism”. White youngsters are seen polishing the marble steps of their tenement houses before church on Sunday, which was the culture of the day. 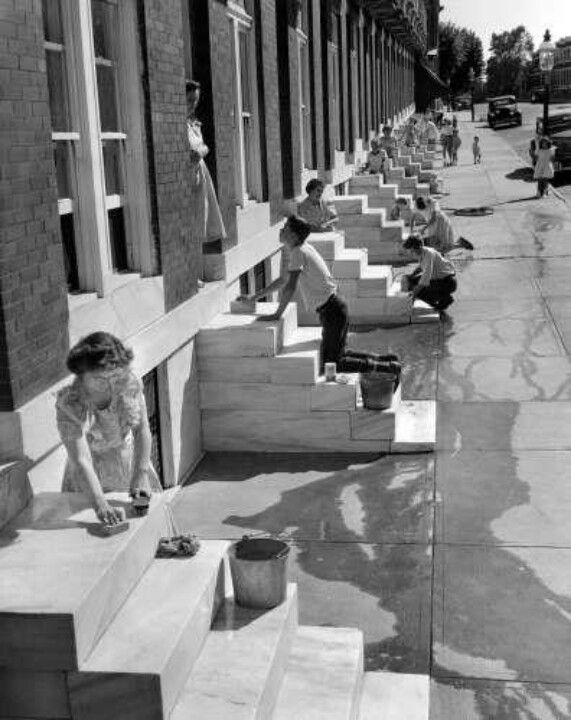 The next music video is of the “Dutch”-British rapper Dutchavelli. His parents immigrated to the Netherlands from Jamaica before moving to the UK. Since he was born in the Netherlands he is known as “Dutch” and that explains the Dutch part of his name. The rest of his name I am assuming is a play on the word “Machiavelli” – which seems to be a popular name among black rappers. One of Tupac’s nicknames was Machiavelli.

What’s interesting about Dutchavelli is that he talks about running “county-lines”. County-lines are mobile drug distribution networks that target rural areas.

The first rapper that I linked above; Pa Saliu – the Gambian, talks about robbing drug dealers. It’s guys like him that are making UK cities less safe to ply the drug trade. So, the dealers are pushing further out into the countryside to prey on whites that are fleeing cities and avoid predation from other criminal immigrant descended youths.

One of the interesting scenes in the music video is where he fist bumps his Hassidic-Jew record producer. This is one real world example of the Jew-POC alliance against white western civilization.

One of the other interesting things about the music of guys like Dutchavelli is that they talk about their hatred of “pagans”. This makes one assume that he is Muslim. It is likely that he became a Muslim while growing up in the UK and was not born Muslim, because Jamaica has a very small Muslim population.

This means that stories that you hear about immigrant descended criminals in Europe being turned into Muslims in prison are true.

The drug dealing, the criminality, and the hatred of “pagans” – meaning idolators – which I am assuming means “Christians” or “Native non-Muslim Brits” is just some of the ways that the immigrant descended population in Europe expresss their hostility toward the native population that were foolish enough to take them in.

The next music video is by a group of Albanian youths in Britain that call themselves “Hellbanianz”. Albanians are well known in the UK (especially London) for being deeply criminal and are involved in all sorts of drug trafficking, human trafficking, and fraud.

I can’t speak Albanian but the music video mostly speaks for itself. One of the interesting things is that at the 2:27 mark you can see them posing on an ATV. ATVs on city streets are a common motif in the African-American criminal underclass. So, you’ve got a group of people that are Albanian, they identify as Albanian, they speak Albanian, and the rest of their culture is imported from the lawless African-American underclass.

Pelle Neroth Taylor’s book “Dying to be Multicultural” is a good summary of the situation in Sweden but I’ve gathered some clips together that gives a visual summary of Sweden’s immigration nightmare.

This next clip is called “Stockholm city” by the Swedish rapper Sinan. I don’t speak Swedish but from what I can tell there is a crowd of immigrants, they are all waving the flags of their home countries, posing with middle eastern style scarves pulled up over their faces, and the “artist” is rapping and posing with an AK-47.

The next clip is of the Swedish rappers Blacky and Ambessa. In the video you can see them waving a congolese flag, posing menacingly with knives and an AK 47, and counting out cash.

The song is called “no face no case” which speaks for itself. They’re saying that if you wear a mask you won’t “catch a case” – meaning you won’t be criminally prosecuted if you hide your identity during the commission of a crime.

The video is filmed in the parkade of an apartment building. Imagine what it is like for the Swedes that are stuck in a building like that and when they walk down to the parkade they see a group of masked, menacing, foreign descended men posing with weapons and blasting rap music.

Sadly, this is what multiculturalism looks like up close.

The next video is from Araby, which is a neighborhood in Vaxjo – which is in small town Sweden. Through the video you can see men with crowbars breaking into a building, car burning, footage of youths throwing flares at police, footage of a man doing a drive by shooting that is filmed inside the car, people shooting fireworks at police, drugs, men waving foreign flags, and people riding around on unlicensed ATVs and dirtbikes.

The next one is a fairly typical Swedish rap video. There’s a short warning that it’s just a song and the police shouldn’t take it seriously, but it perfectly reflects the immigrant descended criminal culture in Sweden

You can see in the first scene after the disclaimer the re-enactment of a moped robbery.

Next I bring you to France. The first French video is called “Crapulerie”. The video starts with a bunch of masked men, posing with shotguns and (probably stolen) ATVs.

This video is more of the same – men waving foreign flags, posing with guns, and everyone is wearing black tracksuits.

One of the things that you’ll hear about in British media is talk of “moped gangs” where immigrant descended youths ride around on stolen mopeds and rob people of their phones, handbags, and backpacks. In this music video you can clearly see that they aren’t just riding around to get around but that the mopeds are being used in the commission of robberies.
This is the kind of music that incites people to do real world moped robberies. 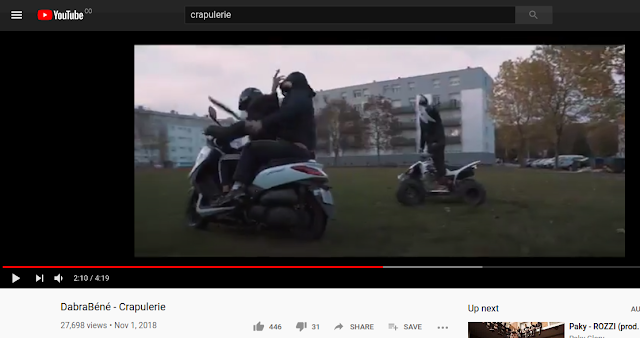 The next clip is from the French rapper Secteur P. It’s pretty much what you expect: African youths in ski masks and tracksuits shooting guns in the air outside their apartment complex.

The next clip is from Germany. Most people know about the Turkish population that was brought into Germany after world war II to help rebuild the country after the allied bombing decimated the German population.

The video is called “Made in Turkey”.

In the video you can see muscular Turkish toughs hanging around with their dogs. At the 30 second mark one of the guys pulls a World War II era sten gun from his trunk.

I think the visuals mostly speak for themselves.

The next video is of the German-Jewish rapper GZUZ (Kristoffer Klaus – Klaus being the yiddish word for a “small synagogue”) and his rap group 187 Strassenbande. His group seems to be mostly German Jews and immigrant descended youth showing off about drug dealing, pimping women, flashing guns and cash, etc.

The member BonezMC (born Johann Lorenz Moser) seems to be a native German gentile (based on facial features and surname), making him an example of a native European that has been pulled into the predominantly immigrant descended criminal subculture.

So, I guess they’re not all foreigners.

In sum, I wanted to share some of the research that I have done into the music of the mostly immigrant descended criminal underclass in Europe. This is the kind of footage that people need to see because it cannot be denied. This is not stuff that is just a racist fantasy, but is being produced by the immigrants themselves for their own enjoyment. I think it’s important to do this kind of research because it helps us to understand the risk that mass immigration poses to Europe and European diaspora communities. Contrary to what the propaganda will tell you, lots of newcomers to our countries are deeply hostile and come with the mentality of looters. That’s a fact that we can ignore or deny at our own peril.