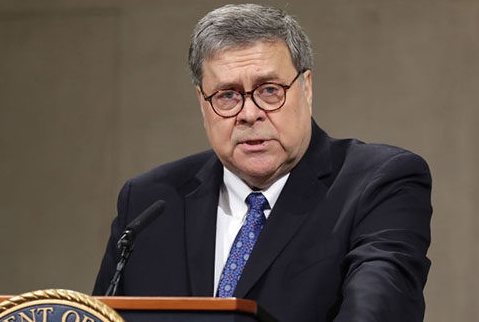 Attorney General William Barr said Wednesday evening “other than slavery, which was a different kind of restraint,” coronavirus lockdowns were the “greatest intrusion on civil liberties in American history.”

Barr’s comments came during a Constitution Day celebration at Hillsdale College, commemorating the date in 1789 when the Constitution was signed by the Framers in Philadelphia.

Throughout the coronavirus pandemic, Barr has expressed alarm at the restrictions imposed by state authorities on First Amendment rights, particularly the freedom of religion.

In April, Barr’s Department of Justice (DOJ) issued a memorandum to all U.S. attorneys to “be on the lookout for state and local directives that could be violating the constitutional rights and civil liberties of individual citizens.”

He explained that while there might be “reasonable and temporary restrictions” on some First Amendment rights for the sake of public health, they should not become an “overbearing infringement.”

The DOJ’s Civil Rights Division subsequently took a stand against state and local governments that were restricting religious services to an extreme extent. As Breitbart News reported, the division’s interventions often prompted a relaxation of the rules.

Earlier this week, a federal judge ruled that Pennsylvania’s coronavirus lockdowns were unconstitutional. While the state’s actions may have been “undertaken with the good intention of addressing a public health emergency,” Judge William Stickman IV ruled, “even in an emergency, the authority of government is not unfettered. The liberties protected by the Constitution are not fair-weather freedoms — in place when times are good but able to be cast aside in times of trouble.”

Stickman, 41, is an appointee of President Donald Trump.

Barr’s comments came in addition to prepared remarks in which he criticized DOJ prosecutors for abusing their power, and defended the intervention of senior DOJ leadership in the decisions made by lower-level prosecutors.

Barr said (as prepared for delivery):

The most basic check on prosecutorial power is politics. It is counter-intuitive to say that, as we rightly strive to maintain an apolitical system of criminal justice. But political accountability—politics—is what ultimately ensures our system does its work fairly and with proper recognition of the many interests and values at stake. Government power completely divorced from politics is tyranny.