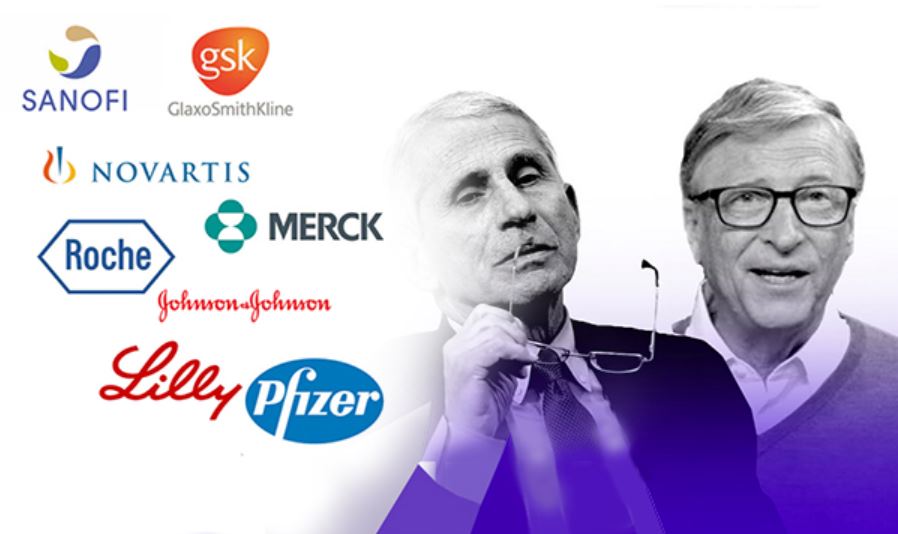 COVID-19: The Emergence of the Pandemic Industrial Complex

If official numbers are to be believed, the United States is one of the worst hit countries in terms of COVID-19 infections and deaths. According to the US Center for Disease Control and Prevention (CDC), at the time of writing, there are supposedly 19 million COVID-19 cases with an alleged 300,000+ deaths suggesting between a 1-2% chance of dying from COVID-19 if infected by it.

However, these numbers are problematic – even before questioning the validity of the statistics themselves leading to them.

For example, asymptomatic cases will likely go both untested and unreported, meaning many more people are actually being infected by COVID-19, exhibiting no symptoms, receiving no treatment, and most certainly not making it into the CDC’s “cases” statistics.

This means that your chances of being infected by COVID-19 and dying are actually much, much less than the often touted claim of 1-2%. Only those who exhibit severe enough symptoms to be tested and/or treated will make it into the statistics of “cases.”

In terms of framing any pandemic, an exaggeration of the lethality of the virus becomes a fundamental issue. If this information by itself is carelessly or dishonestly presented to the public without mention of the many more people likely being infected and exhibiting no symptoms at all, panic can, and clearly has been spread across society and the world, enabling extreme policies to glide through approval, beginning the process of disfigurement society now suffers today.

This was a fact highlighted by the work of Dr. John Ioannidis who, even at the onset of COVID-19, attempted to raise the alarm about needlessly stoking public hysteria, the folly of driving public health policy without proper data, and the catastrophic impact it would have – and is now clearly having – on society if this trend isn’t reversed.

A video interview conducted by Journeyman Pictures from April 2020 noted Dr. Ioannidis’ breakdown of data and the results of his own studies conducted to illustrate exactly this. His study included widespread serological (antibody) testing in Santa Clara County, California to see how many individuals may have been infected by COVID-19 but simply never exhibited symptoms, or symptoms serious enough to seek medical attention and be tested for COVID-19.

If you compare the numbers that we estimate to have been infected, which vary from 48,000-81,000, versus the number of documented cases that would correspond to the same time horizon around April 1st, when we had 956 cases documented in Santa Clara County, we realize that the number of infected people is somewhere between 50 and 85 times more compared to what we thought, compared to what had been documented. Immediately, that means that the infection fatality rate, the chance of dying, the probability of dying, if you are infected, diminishes by 50-85 fold, because the denominator in the calculation becomes 50-85 fold bigger. If you take these numbers into account, they suggest that the infection fatality rate for this new coronavirus is likely to be in the same ballpark as seasonal influenza.

The need for wider testing to fully establish mature datasets – as Dr. Ioannidis and his team at Stanford illustrated – and efforts to communicate to the public the difference between the infection fatality ratio (IFR) and the case fatality ratio (CFR), have been neglected by Western governments and even more so by the Western corporate media. In some cases, efforts appear to be being made to deliberately obfuscate or confuse this crucial information in order to continue stoking panic and hysteria.

But in addition to this, there is the fact that governments – particularly in the West – have been caught using dubious or disorganized methods to tally COVID-19 deaths – meaning that both IFR and CFR numbers could be easily skewed.

A review of how deaths from coronavirus are counted in England has reduced the UK death toll by more than 5,000, to 41,329, the government has announced.

The article also noted that:

Become an Activist Post Patron for just $1 per month at Patreon.

The article revealed that Public Health England had “included everyone who had tested positive [for COVID-19], even if they died months afterwards and their death may have had another cause.”

Similar statistical gymnastics are being performed in the US. Even The New York Times raised the issue fairly early on in article, “Is the Coronavirus Death Tally Inflated? Here’s Why Experts Say No,” clearly inferring that there may be a problem with the official methodology, and went on to explain throughout the article how it is impossible to ever know since accurate counts – or even accurate systems to use in counting – may not presently exist in the US.

In other words: the current systems are less than perfect and vulnerable to systemic distortions in the presentation of data. Again, this is a fundamental issue when public health policy is based on the perceived severity of the epidemic.

The Real Impact of COVID-19

Based on what were clearly misused and incomplete statistics, the US, the UK, and much of Western Europe have led the world in stoking unprecedented hysteria, enforcing travel restrictions and lockdowns, including the closing of businesses and schools, and grinding the economies of the world to a halt either directly or indirectly – in a manner similar to but with an impact much greater than the US-led global “War on Terror” starting in 2001.

Pressure from “international organizations” like the World Health Organization (WHO) using its UN-affiliated platform to declare a “global pandemic,” along with Western governments and the corporations that dominate foreign and domestic policy, has created a global crisis – not in terms of human health, but in terms of socioeconomics.

Businesses are closed – not because those who regularly run or patronize them are in hospital beds or dead – but by order of governments, and with official policy backing from organizations like the WHO.

The mainstream media has played a key role in this – not only repeating narratives provided by governments and healthcare institutions uncritically, but refusing to fulfill their role as watchdogs and investigators searching out impropriety.

It is a state of hysteria that is crippling small and medium-sized businesses (SME), but a boon to big-business.

Headlines from papers like the Wall Street Journal admit, “Big Tech Companies Reap Gains as Covid-19 Fuels Shift in Demand,” or as the Guardian reported, “Amazon third-quarter earnings soar as pandemic sales triple profits,” make it clear that some big-businesses are profiting from the hysteria.

Moreover, the Guardian report, “The mystery of which US businesses are profiting from the coronavirus bailout,” reveals how struggling big-businesses are being bailed out by government money – while the SME sector, the real pulse of any vibrant economy and society – is being left behind.

But there is one industry who stands out above all others to benefit, an industry notorious for its deeply rooted corruption, and an industry that has already been caught using its ties with international organizations like the WHO to declare pandemics, stoke hysteria, and profit handsomely from the resulting chaos.

Western Big-Pharma’s profiteering and corruption under ordinary circumstances is already shocking. The current climate of public confusion, panic, and growing socioeconomic desperation only invites the industry’s impropriety to new levels.

Pharmaceutical corporations like Pfizer, Johnson & Johnson, AstraZeneca, and Moderna – having received billions of dollars directly or indirectly from taxpayers to develop COVID-19 vaccines – have long, documented histories of corruption, including bribing regulators, doctors, and governments.

They have also been caught falsifying safety and efficacy data. They have promoted the use of their products for patients in cases not approved of by regulators, including on children.

They have even been caught knowingly selling products they knew were dangerous or even deadly – withholding critical information from both regulators and the public.

Pfizer alone – as its COVID-19 vaccine began rolling out publicly – was under investigation this year, according to its own Security Exchange Commission (SEC) filing, for its Greenstone generics business over antitrust concerns, for manufacturing issues regarding Quillivant XR, regarding quality issues over the manufacturing of auto-injectors, over corruption inquiries regarding its Russian and Chinese operations, and in regards to lawsuits in Mexico over the manufacturing of Zantac and a cancer-causing chemical called N-Nitrosodimethylamine (NDMA) found in the product.

The investigation regarding Zantac finally prompted the US Food and Drug Administration (FDA) – who had originally approved the drug – to request it be pulled from the market after finding it is indeed linked to an increased likelihood of causing cancer.

The Wall Street Journal in a 2020 article titled, “Pfizer Receives Inquiry From SEC Bribery Unit,” would note of Pfizer’s past scandals that:

Pfizer has had past run-ins with U.S. authorities over allegations of bribery among its operations abroad. The company in 2012 agreed to pay $60.2 million to settle investigations by the SEC and the Justice Department into alleged violations of the FCPA in several countries in Europe and Asia, including China and Russia.

The US Department of Justice in its own statement regarding part of the 2012 payout by Pfizer would note:

According to court documents, Pfizer H.C.P. made a broad range of improper payments to numerous government officials in Bulgaria, Croatia, Kazakhstan and Russia – including hospital administrators, members of regulatory and purchasing committees and other health care professionals – and sought to improperly influence government decisions in these countries regarding the approval and registration of Pfizer Inc. products, the award of pharmaceutical tenders and the level of sales of Pfizer Inc. products.  According to court documents, Pfizer H.C.P. used numerous mechanisms to improperly influence government officials, including sham consulting contracts, an exclusive distributorship and improper travel and cash payments.

Such bribery might help explain why Pfizer and other pharmaceutical corporations are able to sell dangerous products like cancer-causing Zantac or – in the case of fellow COVID-19 vaccine producer Johnson and Johnson – cancer-causing baby powder –  for years before mounting lawsuits and public outrage spur regulators to finally do their job properly.

Facing thousands of lawsuits alleging that its talc caused cancer, J&J insists on the safety and purity of its iconic product. But internal documents examined by Reuters show that the company’s powder was sometimes tainted with carcinogenic asbestos and that J&J kept that information from regulators and the public.

What this illustrates is a consistent pattern of corruption stretching across Pfizer’s (and Johnson & Johnson’s) manufacturing process to their  business practices and spanning years. It is an entire industry that repeatedly engages in dangerous impropriety, is repeatedly investigated and fined, but allowed to not only continue conducting business – but is still entrusted with matters critical to public healthcare.

The implications it has for the process of developing, approving, producing, and distributing vaccines for COVID-19 should be obvious.

Tags: COVID-19: The Emergence of the Pandemic Industrial Complex