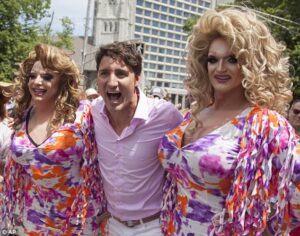 Do you recall how some commentators predicted the legalization of same-sex marriage would put Canada on a slippery slope of social change that would ultimately be disastrous? I was one of them.

This column is not intended to assess the policy decisions of 15 years ago, but to determine how those policy decisions continue to reverberate and demand escalating social anarchy. I believe I and others were right about same-sex marriage not being an end in itself, but an opportunity to open the doors to chronic social change that is summarized by the metaphor of the slippery slope. To deny this fact, one has to be either incredibly dense, willfully ignorant or a keen believer that the slippery slope is a good place to be.

The idiocy of being forced to endorse the fantasies of men who believe they are women and wish to be treated that way so they can visit female change rooms and bathrooms is part of that slope. The result of the delusion has been the invasion of female sports by biological males who are obviously men, but are playing mind-games with the world. Part of the current sexual revolution has ironically been the erosion of women’s rights, because transgender rights now trump these hard-fought liberties.