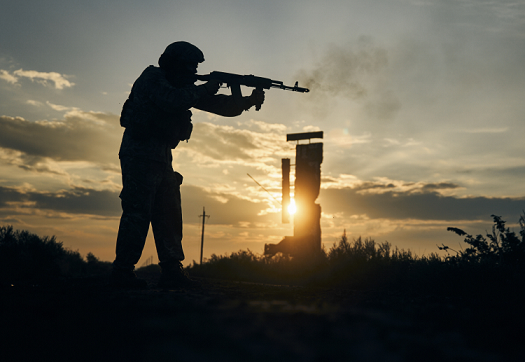 Ukraine should not be placed on a pedestal in the West’s attempts to support the country in its conflict with Russia, believes Andrew Milburn, the founder of the ‘Mozart Group’, which has been providing training for Kiev’s forces.

The retired Marine commander shared his experience and conclusions from working in Ukraine during an appearance on the Team House podcast last month. Attention to the video, which had only amassed some 20,000 views since it was posted, was drawn by Grayzone editor Max Blumenthal on Monday.

During the podcast, Milburn stated that Ukraine is a “corrupt, f****d-up society.” While he stressed that continued Western support for the country was important and justified by the need to uphold “global norms,” he suggested that the whole point was “not about Ukraine.”

“I have a Ukrainian flag tied to my bag, but I’m not like ‘oh my God, Ukraine is so awesome,’ because I understand that there are plenty of f****d up people running Ukraine,” Milburn said, admitting that he’s really “not a big fan” of the country.

He also stated that “a number of things” that Kiev’s forces do with Russian POWs violate the Hague convention on the laws of armed conflict, especially when it comes to filming interrogations of captured Russian soldiers and posting them online.

Milburn noted that the trainers from Mozart Group don’t condone such acts and have always tried to distance themselves from any unit that showed them videos of killing Russian POWs. “We’ve been shown those videos plenty of times,” he said, adding that “there were plenty” of atrocities being committed by Ukrainian forces and “all kinds of atrocities to go around.”

He did stress, however, that most of the groups his trainers have dealt with were “very professional” and did not resort to such acts.

While Milburn’s Mozart Group claims charity status, it is considered to be among the largest private military companies currently working in Ukraine and has been providing military training to Ukrainian soldiers since the early days of the conflict. However, it has also been the source of several damning reports on the dark underbelly of Kiev’s armed forces.

Back in August, Milburn was quoted by CBS news in a since-deleted report that revealed how Western-supplied weapons were disappearing in Ukraine and popping up on the black market. Recently, he was also quoted by Newsweek in a report revealing that the Ukrainian military was seeing casualty rates of 70% or more, contrary to official Kiev’s claims.