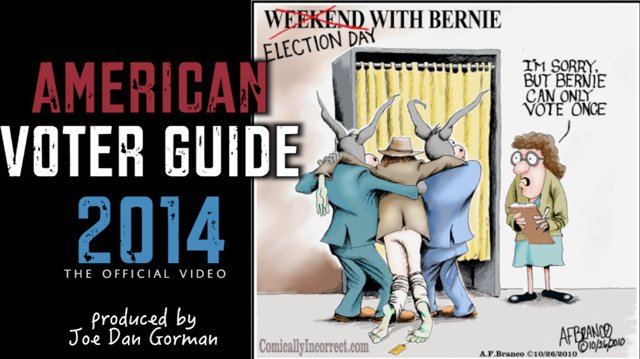 Most of us are rational people who understand that while we are not big fans of the Republican Party…. they have occasionally saved our bacon from disastrous Democrat policies (see Carter to Reagan)—-and todays Democratic Party is dangerous and must be removed from power. This means we will have to vote Republican—even for the stinky ones.

We don’t have time to argue about the shortcomings of the Republican Party— nor do we have time to create a viable third-party, the Democratic Party must be removed from power….so we have to vote republican—we have no choice.

And if you’re one of the people who choose not to vote…or choose to vote for a third-party this election to ‘make a statement”, you may as well vote for the Democrat.

Please share this new video with everyone you know that needs it. (runtime 5 min 26 sec)

I agree with Mark Levin, who’s predicting Obama will go Full Mussolini in the last 2 years of his administration—if he is allowed. That’s precisely why it is so important that the Republicans take both the House and Senate.

In the video, we’re targeting the politically apathetic, the independents and Reagan Democrats—-if there are any left. We’re also going to point out that, the Democrats have been the majority party in our government since Jan. 1, 2007— and have been the party in charge for eight years—and now we’re going to look at their report card.

And after 8 years of Liberal Policies—-”Where are we now” versus “where we were then.”