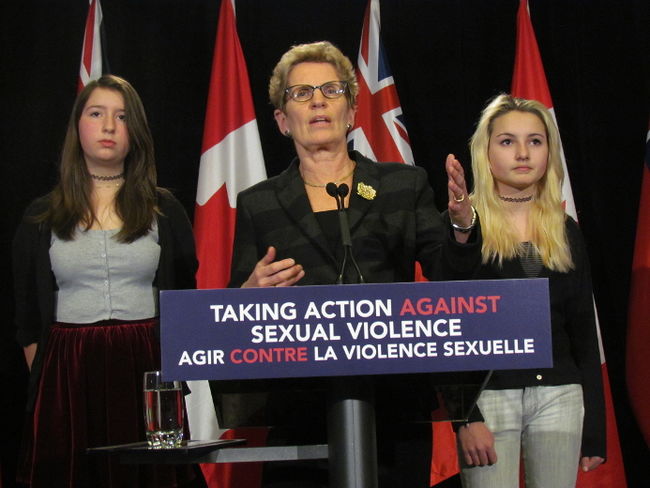 Left. Bizarre Photo Op. Kathleen Wynne, Canada’s first lesbian Premier is
introducing a hateful new sex education curriculum in Ontario. Meanwhile, Ben Levin, her former
Deputy Minister of Education is pleading guilty to child pornography and counseling sex assault. “That’s two 13 year-old-girls addressing the media with a 61-year-old avowed lesbian and talking about sexual consent in a country where the age of consent is 16. You don’t need to be a political science professor to see that as a dumb move.”

by Thomas Carter
(henrymakow.com) Tuesday, I saw Premier Wynne’s buddy Ben Levin’s picture on the cover of the Toronto Sun. Apparently, someone leaked a message he had sent to colleagues asking them to write letters on his behalf.The former Deputy Minister of Education in Ontario, in charge of drafting the hateful new sex education curriculum, the Sabbatean Jew Levin is pleading guilty to child pornography and counseling sex assault. He gave his colleagues specific instructions on what to write. (Benjamin Levin, left, lost his job as a Professor of Education.)“For the benefit of the court, letters should indicate that you are aware of the guilty pleas to the three charges. In that regard, you may want to use language such as the following, suggested by my lawyer: I am aware that Mr. Levin is pleading guilty to one count of possession of child pornography, one count of making written child pornography, and one count of counseling a sexual assault.””I am aware that these charges stem from Internet conversations in which he engages with strangers in explicit discussion of sexual acts with children. I am aware that during these chats he counseled an undercover police officer posing as the mother of a child to sexually assault her child for him. I am aware that 15 images and two videos considered to be child pornography were found in his knowing possession on his computer.”

Canada’s first lesbian Premier is vulnerable. Ben Levin was Wynne’s deputy when she was Minister of Education; he was also on her transition team. She is attempting to subject millions of Ontario schoolchildren to a radical new sex-ed program that was probably written up by Ben Levin or someone like him.

GROOMING THE NEXT GENERATION

To further my point,  there was Wynne’s bizarre photo-op with two 13 year old girls recently. The two girls appeared at the podium with Wynne and spoke to the media about the topic of sexual consent.

Eighth grade student Tessa Hill stated, “Everything in creating a consent culture starts with education, and so it starts with putting that information in the curriculum so kids can learn about asking for permission and about healthy relationships.”

She dismissed the teaching of abstinence because “whether or not teens are going to be having sex when they’re 13 or 14, learning about abstinence isn’t realistic because sex is a part of society, part of our lives. Not learning about consent means not knowing what consent is when you do decide to have sex.”

That’s two 13 year old girls addressing the media with a 61-year-old avowed lesbian and talking about sexual consent in a country where the age of consent is 16. You don’t need to be a political science professor to see that as a dumb move but just for the record U of T political science professor Nelson Wiseman commented on the affair, “Time will tell, he said, if it was effective but at first blush, I am not sure it gains her support” in a “treacherous area” where there are a lot of “pre existing positions.”

From a political point of view, discussing “sexting” may be realistic but to “introduce consent to children in Grade One is another matter.”

Although Wynne’s opponents have been slow to move but an offensive is starting to form led by Monte McNaughton (PC), MPP for Lambton-Kent-Middlesex. Monte questioned why the Premier won’t reveal the content of the sex-ed curriculum.

In response, Wynne emphasized that we need an “updated, modern sex-ed curriculum.” This has been Wynne and Minister of Education, Liz Sandals main argument as if the human anatomy has undergone a major transformations in the last 17 years.

Monte McNaughton also appeared on 100 Huntley Street advising parents on how to oppose the new curriculum.

Another important group of opponents is PAFE, Parents as First Educators, led by Theresa Pierre. Register on the website for e-mailed updates and ways to get active. PAFE has launched a petition to stop Wynne from making revisions to the sex-ed curriculum.

There are a lot of people who will oppose this new curriculum. In fact, more than one person, the type who never talk about politics or serious matters brought it up to me. The problem is many of these people aren’t organized and don’t know what to do.

The comments on yahoo news have changed dramatically in the last few years. A big majority are tired of sexual perversion being promoted at every turn. Sooner or later, someone is going to harness that discontent.

Kathleen Wynne is vulnerable. She is no Barrack Obama, yes he’s just as twisted but he’s also slick and charming. Wynne is creepy, overreaching and has a lot of liabilities. If people start to take action she could find herself out on the street long before the next election. – See more at: http://www.savethemales.ca/#sthash.JKOPNTGm.dpuf