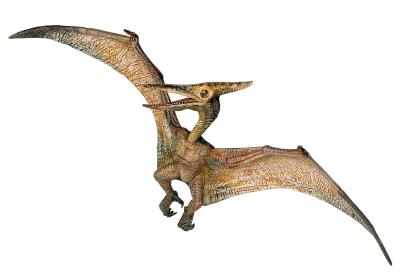 Pterodactyls are large flying reptiles of a prehistoric age, immortalized in museums and documentaries. Known as being part of the late Jurassic age, they were supposed to have gone extinct with the rest of the dinosaurs about 65 million years ago. Nevertheless, Pterodactyls aren’t just a paleontological subject, but are the subjects of reported sightings. Take a look at the evidence and see what you think.

What is the Oldest Contemporary Pterodactyl Sighting?

In 1603, the Pima Indians told Spanish explorers that they had killed a giant flying monster by building a fire at the mouth of a cave as asphyxiating it. There isn’t much literature that survives to examine what it was that the Native American saw, but reportedly, Conquistadors returned to Spain claiming that they’d seen giants, dragons, and ghosts.

What is the Oldest American Sighting?

In 1673, when French explorers began navigating the middle Mississippi River, they reported seeing 40-50 ft. pterodactyl petroglyphs in a cliff wall. You can still see these in modern day Alton, Illinois. While these Pterodactyls were deceased, the Native Americans had also painted huge depictions of Pterodactyls alongside the petroglyphs. Their reasoning for this was to scare away the giant beast that had terrorized a nearby community, a beast called, Piasa, “the bird that devours men.”
After enough time living in fear, Chief Ouatoga gathered the bravest of his tribe, took them to the mouth of the beast’s gave, had the braves step around the skeletons and carcasses of the fallen Native Americans, and then the chief himself served as bait for the pterodactyl. As it flew out of the cave to eat him, the tribe shot poisoned arrows at it and killed it. Once it was dead, the tribe continued to paint the depiction of the beast on the cliff wall to commemorate the event. This event was so important to both the Native Americans that it was featured in an article in 1836 by John Russell, a professor of Greek and Latin at Shurtleff College.

Were there Other Legends of the Piasa?

Legend claims that other Piasas, flying monsters, or Pterodactyls, lived in caves on the Mississippi River. The Sioux Tribe has a legend about the Piasa having killed a reptilian, snake-like monster called the Unktehila in the Great Lakes. This Unktehila could viably be a Plesiosaur or Pliosaur. Another form of this legend exists with another tribe, with different names for the creatures: The Ojibway tribe near Lake Superior said that a Pterodactyl-like beast killed the Mishipishu, a snake-like monster in the lake. Two Native American traditions have the same story, though with different names for the creatures, names that even differ from paleontological names for those creatures.

What about More Modern Sightings?

One of the oldest and most interesting stories about contemporary Pterodactyl sightings is from April 26, 1890, in Tombstone, Arizona. Two ranchers were riding between the Whetstone and Huachuca Mountains when they saw this massive bird. They shot the beast down and nailed it to a barn where several cowboys inspected it.
This Pterodactyl was described as having eyes the size of a dinner plate, a beak with teeth, about 8 feet long. The ranchers had some difficulty moving the body to inspect the wingspan, but measured one wing at 78 feet, which lends the wingspan to be approximately 160 feet. In 1963, Saga Magazine claims that a photograph was taken, though it is lost.

What Happened at Lake Elizabeth, California?

Another older account of Pterodactyls is from before 1886 and recounts a group of local Native Americans and Mexicans referring to Lake Elizabeth as “La Laguna del Diablo” or “The Devil’s Lake.” In 1886, Don Felipe Rivera came forth and claimed to have witnessed a bird with a wingspan of 45 feet successfully eating some of his cattle, chickens, and horses, and attempting to eat a steer right in front of him. Rivera shot at it with his revolver, scaring off the beast, but later signed a contract with the Sells Brothers for $20,000 if he could deliver it. Rivera never saw it again and claimed later that it must have been the beast found in Tombstone, Arizona.

Have there Been More Contemporary Sightings?

In 1944, Papua New Guinnea reported to seeing a pterodactyl with a wingspan of 29 feet, though no one has seen the beast since. In 1992, a number of Pterodactyl sightings were reported in Brazil, one that nearly collided with a commuter plane. This story was even featured in the Australian People Magazine and theorizes that pterodactyls inhabit the still-mysterious Amazon Rainforest. In 2002, an Alaskan bush pilot reported to having seen a beast with a 14-foot wingspan, a bird with no feathers and with leathery skin.

If these Pterodactyl sightings weren’t, in fact, Pterodactyls, then scientists have a few undiscovered species to find and explain. The Condor is the largest bird in the world, and it has a wingspan of 10 feet, so sightings of “birds” with a larger wingspan are unexplainable. The evidence suggests the possibility that Pterodactyls may still exist. Whatever name these creatures may be given by scientists, it is not entirely impossible that Pterodactyls lasted for a time after the extinction of dinosaurs.