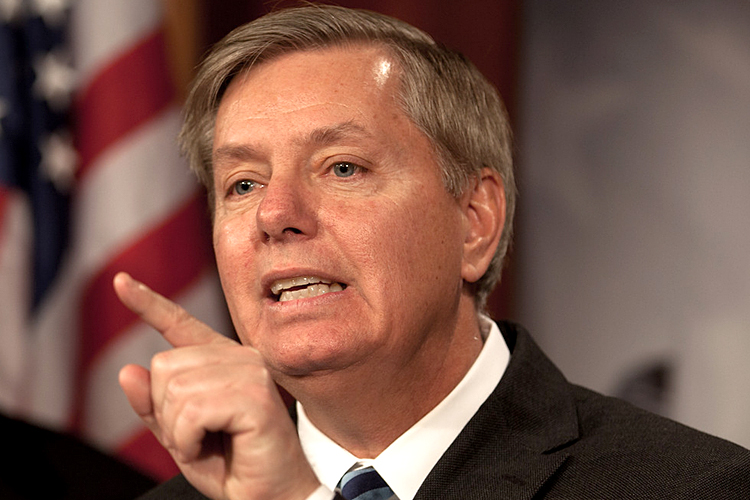 Senator Lindsay Graham has warned South Carolinians about the threat of a ‘terrorist nuclear attack’ on the same day our exclusive high level military intel revealed to us that nuclear warheads were being shipped to South Carolina from a major Texas airforce base under an ‘off the record’ black ops transfer.

Found in the CBS report entitled ‘Graham: Nukes In Hands Of Terrorists Could Result In Bomb Coming To Charleston Harbor’, the report details Graham’s warning that a lack of military action in Syria could result in a nuclear ‘bombing’ in Charleston, South Carolina — the very destination of the black ops nuclear transfer. The CBS report reads:

“He [Graham] says if there is no U.S. response [to Syria], Iran will not believe America’s resolve to block Iran from developing nuclear weapons. Graham also says those nuclear weapons in the hands of terrorists could result in a bomb coming to Charleston Harbor.”

Graham is quite literally saying that if we do not launch a war with Syria, South Carolina may be nuked. And this ultimately reeks of yet another false flag being orchestrated by the United States government in order to send us into war, or at the very least a threat. Except this time, we’re talking about nuclear weapons. Amazingly, we were the first to get intel on this from our credible and extremely high level military source, who told us the following:

“Dyess is beginning to move out nuclear war heads today. I got a tap from DERMO earlier. He said it was the first time they have been even acknowledged since being put there in the 80′s. No signature was required for transfer… There was no directive. He said that Dyess Commander was on site to give authority to release. No one knew where they were going really, but the truck driver said to take them to South Carolina and another pick up will take them from there.”

This was sent to us before the Graham report came out warning about the nuclear attack on South Carolina, and coincides exactly with what Graham is saying. I am deeply concerned by these findings, and ask everyone to spread the word on this information immediately. Whether or not Graham is receiving intel from higher ups and believes in a legitimate terror attack on the horizon is unknown, but the reality here is that we have intelligence that has linked the unsigned transfer of nuclear warheads to this exact location.

Here is the video report we did on Tuesday regarding the missing nuclear warheads:

The entire event is eerily similar to the unsigned nuke transfer that is now known as the ’2007 United States Air Force nuclear weapons incident’, in which nuclear warheads went ‘missing’ from Minot Air Force Base and Barksdale Air Force Base back in August of 2007. The Minot event, however, was major national news and was even covered by the mainstream media extensively. Disturbingly, however, numerous individuals from the base began dying like flies and committing suicide after the event — and that’s even when it was in the mainstream.

Hopefully, this entire thing will amount to nothing and pass by without any form of ‘terror’ attack. Hopefully the attendee during the speech who told the US News publication that Graham’s speech was ‘absolute fear mongering’ is right. Unfortunately, the military source revealing this information is extremely accurate and is absolutely certain that a black ops nuclear transfer did indeed take place. And what’s more concerning is the fact that we have not heard from the source in quite some time.

We are risking our lives bringing you this report on the high level intel and connecting the dots here to what Lindsay is saying. You won’t hear about this in the mega media unless we force them to cover it, and it’s up to us to get this out there. For the first time, we may be able to utilize this high level intelligence to get answers and stop a potential attack.