Oilsands pipelines now back on the election agenda

So, now we know. The woman who wants to be the next Democrat to occupy the White House has made a decision that the president she hopes to succeed hasn’t, or won’t.

Hillary Clinton came out against the Keystone XL this week, the Canadian-backed pipeline that would carry Alberta bitumen — and some North Dakota crude — through the heartland of America to the giant refineries on the U.S. Gulf Coast.

“I think it is imperative that we look at the Keystone pipeline for what I believe it is — a distraction from the important work we have to do on climate change,” Clinton said at a meeting in Iowa, which just happens to be a key battleground state for Democrats in the lead-up to the presidential nomination race next year.

She used stronger language in a later tweet, saying “it’s time to invest in a clean energy future not build a pipeline to carry our continent’s dirtiest oil across the U.S.”

American progressives and environmentalists — key Democratic constituencies — immediately cheered her decision. Barack Obama likely did, too, from the privacy of the Oval Office.

After delaying his own decision, again and again, Clinton’s statement may well relieve him of having to make one at all.

Clinton, too, had delayed stating where she stood. And for good reason. She was Obama’s secretary of state when her department concluded Keystone XL would have no significant impact on oilsands development, support 42,000 jobs and generate billions in tax revenues in the U.S.

But these days, Clinton is more interested in burnishing whatever climate-friendly agenda she intends to roll out, especially now that she’s facing a real threat for the Democratic nomination from Vermont Senator Bernie Sanders.

Once the longest of longshots, he’s been endorsed by Friends of the Earth and says climate change “is the greatest threat facing the planet.”

That’s the political climate south of the border. Here in Canada, where climate change has so far been largely a secondary issue in the federal campaign, Clinton’s unexpected decision didn’t prompt much cheering from the three main party leaders.

Both Conservative Stephen Harper and the Liberals’ Justin Trudeau support Keystone XL. New Democrat Tom Mulcair does, too, sort of. His support hinges on the pipe carrying oil products refined in Canada instead of raw bitumen. 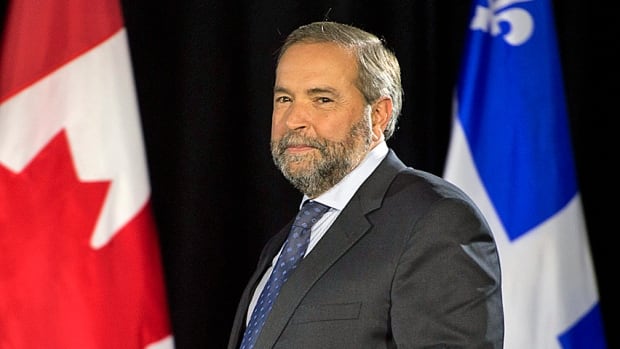 So Mulcair tried Wednesday to portray Clinton’s decision as a victory for the NDP position.

“Every progressive in North America is against the Keystone XL pipeline, that’s nothing new,” he said at a news conference in Montreal.

“I’m also against the Keystone XL for one very good and simple reason. I believe the way to develop our natural resources is to do it sustainably. And that includes creating the value-added jobs here in Canada.”

For their part, the Conservatives made no effort to spin the Clinton news.

Harper has called approving the pipeline a “no-brainer.”

He has also told an American audience that Canada would not take no for an answer, all with a view to waiting out Obama, hoping the now Republican-dominated Congress, or perhaps a new Republican administration post-2016, would lead to a yes.

“It is our continued hope that the Obama administration would make a decision on that, and that it would be a favourable decision because this is good for both our countries.”

Now hope’s a wonderful thing. You can never have enough of it, especially in politics.

But the Conservative would be better off hoping for a Republican win next year to see Keystone approved. Their relations with the Democrats on this file are beyond repair.

There are, of course, alternatives. None of them any closer to transporting Alberta’s extra-heavy oil than Keystone. All of them carrying far more political risk at home.

Northern Gateway. Trans-Mountain. Energy East. All are in various stages of review.

But it’s Energy East that will get most of attention tonight as the party leaders take part in the first French-language debate of the campaign in Quebec. 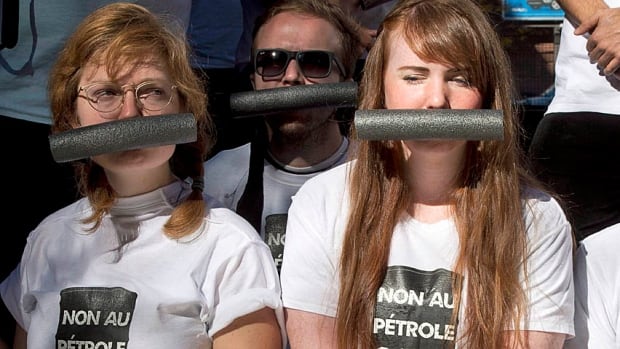 Protesters wear foam ‘pipelines’ as they demonstrate outside the National Energy Board hearings in Montreal in 2013 on the proposed Energy East pipeline. The issue has been a particularly hot button in Quebec. (Ryan Remiorz / Canadian Press)

Energy East would carry more than a million barrels of oil a day from Alberta and Saskatchewan to refineries and ports on Canada’s East Coast.

For Mulcair, who will probably be on the hot seat in tonight’s leaders’ debate, the challenge will be to explain his support for the project if it goes through a more rigorous environmental review than the Conservatives brought in during the last government.

Mulcair, a former Quebec environment minister, has tried to walk a fine line on pipelines, suggesting his party is in favour of resource development but only if the environmental bar is set much higher.

Trudeau prefers pipelines to rail, a position no one in Quebec would argue with after the Lac Mé​gantic explosion killed 42 people and obliterated much of the town’s core in 2013.

But he is not necessarily in favour of Energy East. Like Mulcair, his concerns relate more to the review process than the pipeline itself.

Harper, of course, is for every pipeline. Green Leader Elizabeth May is against them all.

Hillary Clinton may have intended her opposition to Keystone XL for an American voting audience. But the spillover will almost certainly be felt now in this federal campaign.