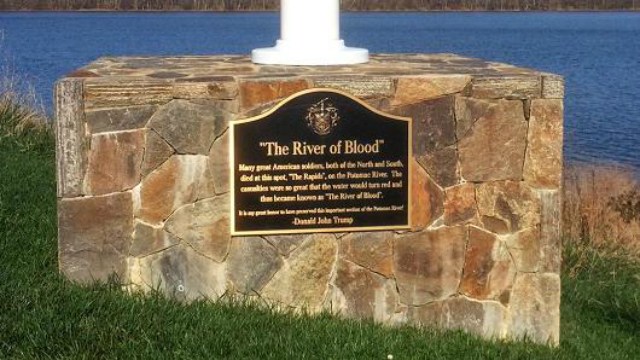 If you needed any more convincing that liberals will attack Donald Trump for anything then look no further.

The New York Times is going after Trump for a Civil War plaque on a flagpole on his golf course that commemorates a battle that was fought on the Potomac River and honors those who lost their lives there.

The paper claims that the battle never actually took place there and those lives were actually lost 11 miles up the river. From The Gateway Pundit:

The Trump National Golf Club in Sterling, Virginia commemorates a stretch of land where Civil War heroes, both Rebels and Union soldiers, lost their lives.

Liberals say the historical marker is not accurate.
And they want you to believe that Donald Trump came up with the idea for the commemorative plaque.

When Donald J. Trump bought a fixer-upper golf club on Lowes Island here for $13 million in 2009, he poured millions more into reconfiguring its two courses. He angered conservationists by chopping down more than 400 trees to open up views of the Potomac River. And he shocked no one by renaming the club after himself.

But that wasn’t enough. Mr. Trump also upgraded its place in history.

Between the 14th hole and the 15th tee of one of the club’s two courses, Mr. Trump installed a flagpole on a stone pedestal overlooking the Potomac, to which he affixed a plaque purportedly designating “The River of Blood.”

“Many great American soldiers, both of the North and South, died at this spot,” the inscription reads. “The casualties were so great that the water would turn red and thus became known as ‘The River of Blood.’”

The inscription, beneath his family crest and above Mr. Trump’s full name, concludes: “It is my great honor to have preserved this important section of the Potomac River!”
Like many of Mr. Trump’s claims, the inscription was evidently not fact-checked.

“No. Uh-uh. No way. Nothing like that ever happened there,” said Richard Gillespie, the executive director of the Mosby Heritage Area Association, a historical preservation and education group devoted to an 1,800-square-mile section of the Northern Virginia Piedmont, including the Lowes Island site.

Trump’s response to all this was classic Trump.

Trump waved off the historians’ criticisms in his own interview with The New York Times Tuesday.

“How would they know that?” he asked of regional experts. “Were they there?

“That was a prime site for river crossings,” Trump said. “So, if people are crossing the river, and you happen to be in a civil war, I would say that people were shot — a lot of them.”

Trump then refused comment on the identity of “numerous historians” who had discussed Lowes Island with his staff, The New York Times said.

He also would not let the publication speak with any of his “people” over the matter, it added.

“You don’t have to talk to anybody,” Trump said. “It doesn’t make any difference.

“But many people were shot,” the outspoken billionaire added. “It makes sense. Write the story the way you want to write it.”

This is just another example of the media doing everything they can to bash Republicans.  First they were going after Mitt Romney for being a bully in high school.  Then it was Jeb Bush smoking pot in high school.  Then it was Dr. Carson not giving a properly nuanced description of a conversation with a general 40 years ago.  And now it’s a plaque on Donald Trump’s golf course.

Was the actual battle fought on the very piece of ground where the flagpole sits? Probably not. But that doesn’t really matter.  It was fought close enough by Civil War standards to at least pay tribute to those who lost their lives.

What is the New York Times saying? They would rather not honor these fallen soldiers because their dislike for Trump takes precedence?

During the Civil War, soldiers from both the Union and Confederacy were crossing the Potomac back and forth in different spots for years and if Donald Trump wants to honor them on his golf course, who cares?

If newspapers like this put one ounce of the energy they spend trying to slander Republicans on actual journalism, they might actually be able to gain some of their reputation back that they have lost over the years.  Or, heaven forbid, maybe they actually put a Democrat under the same microscope.