Presidential candidates, clockwise from top left, Chris Christie, Hillary Clinton, Bernie Sanders and Donald Trump are stepping up their campaigns in the weeks ahead of the first-in-the-nation balloting at the Iowa caucuses on Feb. 1. Photo: Clockwise from top left: Reuters, Associated Press (2), Getty Images

By Patrick O’Connor
With less than a month before voting begins, establishment presidential candidates, thrown off stride by insurgent rivals through much of last year, are urging voters to move toward conventional choices and end their flirtation with the field’s novices and outsiders.

The efforts reflect the hope on the part of such candidates that the dynamic of the campaign will change now that the calendar has turned to 2016 and real choices are nearly at hand.

“Showtime is over,” New Jersey Gov. Chris Christie told a crowd Monday at St. Anselm College in Manchester, N.H. He questioned the seriousness of businessman Donald Trump as a candidate, saying these are “dangerous, perilous times” for the nation and the world, and added: “We are not electing an entertainer-in-chief.”

Not far away, former President Bill Clinton made a similar argument to New Hampshire voters on behalf of the Democratic candidacy of his wife, former Secretary of State Hillary Clinton.

“I do not believe in my lifetime anybody has run for this job at a moment of greater importance, who was better qualified by knowledge, experience and temperament to do what needs to be done now,” Mr. Clinton said Monday at a community college in Nashua. 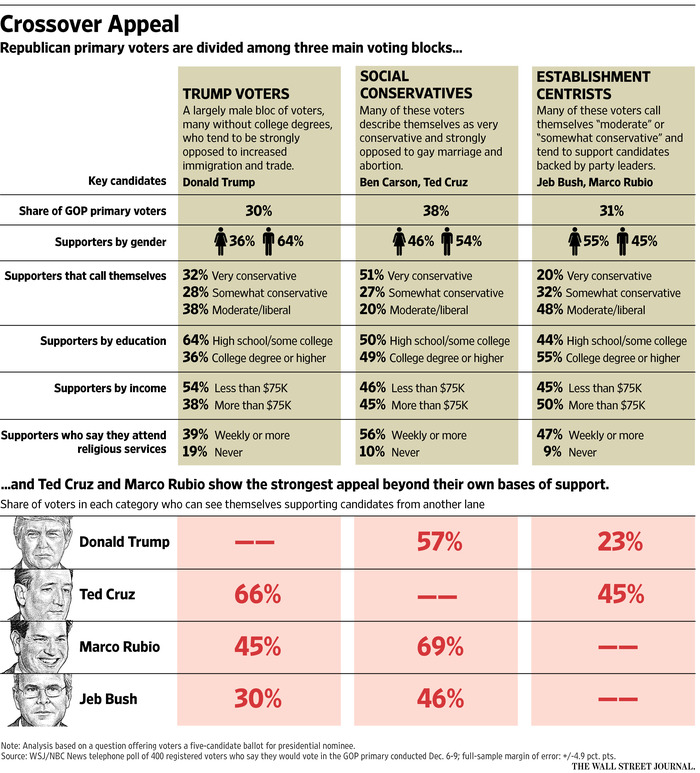 As those entreaties suggest, the weeks ahead will reveal whether the populist anger that has been animating the White House race is just a case of Americans venting their frustration, or represents a more fundamental shift in what type of candidate voters want to lead the country.

Mr. Trump and Vermont Sen. Bernie Sanders, who is challenging Mrs. Clinton, have energized legions of voters in their respective parties who are fed up with traditional politicians and the calculated nature of typical campaigns, but it has been more than a century since either major party picked a true outsider to be its nominee.

Democrats seem to be coalescing around Mrs. Clinton as their pick to succeed President Barack Obama, but polls in Iowa and New Hampshire show she is vulnerable in both. And her campaign has been shaped from the beginning by the more progressive, anti-Wall Street fervor championed by Mr. Sanders, her stronger-than-expected rival.

Over the weekend, the Sanders campaign said it raised $33 million since September, close to the Clinton camp’s fundraising mark. Mr. Sanders also boasts a sprawling turnout operation in the first-in-the-nation caucus state of Iowa, a sign he could pull closer to the front-runner.

In the GOP primary, Mr. Trump has traded on his celebrity, his lack of political experience and his penchant for provocation to build—and sustain—a sizable lead over the rest of the GOP field in national public-opinion surveys.

When his support is added to the shares of Republicans backing Texas Sen. Ted Cruz and retired neurosurgeon Ben Carson, more than 60% of GOP primary voters say they favor a political newcomer or a candidate running against party leaders, according to polling averages compiled by Real Clear Politics.

Furthermore, there is no obvious alternative for Republicans who favor a candidate with prior political experience. Florida Sen. Marco Rubio, former Florida Gov. Jeb Bush and Mr. Christie all split a share of that vote, obscuring the choice for more centrist, business-friendly Republicans looking to back a candidate not named Carson, Cruz or Trump.

“This historically large field has splintered the early states’ electorate and allowed Trump and Cruz to grab those six out of 10 voters who are unhappy and mad,” said Scott Reed, senior political strategist for the U.S. Chamber of Commerce who ran Kansas Sen. Bob Dole’s 1996 presidential campaign. “New Hampshire is shaping up to be the great divider that weeds out the field.”

This fragmentation among the so-called establishment wing of the GOP is a big shift from recent history in which conservatives struggled to unite behind a lone standard-bearer. In 2012, evangelical Christians and other more conservative voters split their support between former House Speaker Newt Gingrich and former Pennsylvania Sen. Rick Santorum, giving Mitt Romney a clearer lane to the nomination. Similar trends played out in 1996, 2000 and 2008.

“This is the year of the conservative,” said Greg Mueller, a Republican strategist who worked on presidential campaigns for Pat Buchanan and Steve Forbes and whose firm does work for an outside group backing GOP candidate Carly Fiorina, a former Hewlett-Packard Co. chief executive. “It’s just not a good time to be an establishment candidate.”

Mr. Trump’s campaign echoes anti-elite themes of Mr. Buchanan’s bids in 1992 and 1996. But unlike earlier upstarts, he brings unrivaled star power to the 2016 race. Estimates vary, but he has generated millions of dollars in free media coverage, far surpassing what he or any other candidate could spend airing television ads. And Mr. Trump has fed that frenzy by picking fights with rivals and advocating provocative policies that fire up his supporters and infuriate his detractors.

The big question facing Mr. Trump’s campaign is whether he can translate strong poll numbers into actual votes. He performs best among GOP primary voters who register as Democrats or independents, as well as those voters who are least likely to turnout in the fall, according to statistical models built by Civis Analytics, a Democratic data firm born from Mr. Obama’s re-election effort.

The Trump campaign claims a vigorous ground game in Iowa and New Hampshire. Still, its decision this week to begin airing television ads suggests a back-to-basics shift in strategy.

“Honestly I feel guilty. All these people are spending all this money on ads,” said Mr. Trump, while addressing a capacity crowd at the Tsongas Center arena here Monday night. “We can’t be silent anymore folks.”

Mr. Trump is running neck-and-neck with Mr. Cruz in Iowa, according to polls there, and is widely expected to finish behind the Texas senator in a caucus that rewards the most organized campaigns. If Mr. Trump stumbles, Mr. Cruz is well-positioned to assume the mantle as the top antiestablishment pick in the field with a realistic shot at the nomination.

Mr. Sanders has galvanized many of the liberal voters who are lukewarm on, or outright opposed to, Mrs. Clinton by running on his opposition to entrenched financial interests, from big banks to big donors.

He trails Mrs. Clinton by double digits in most national polls, but he is running closer in Iowa and leads the former first lady in most New Hampshire surveys. Mr. Sanders plans to underscore his anti-Wall Street message on Tuesday by outlining a series of reforms he would advance to rein in big financial firms.

Whatever the outcome of the Democratic primary, Mr. Sanders has had an unmistakable impact on the race.

Mrs. Clinton has unveiled detailed policy prescriptions on a range of issues, including many with an obvious appeal to liberals and populists in her party. She introduced a series of financial-market reforms that included a “risk fee” on banks and other institutions with more than $50 billion in assets and a tax on certain high-frequency trades. She also wants to offer a debt-free education at public colleges and universities. And she aims to pay for these new programs by raising taxes on corporations and households that make more than $250,000 a year.

“One difference between Democrats and Republicans is that Republicans are angry at their own party; Democrats aren’t,” said Democratic polling expert Mark Mellman. Within his party, the populist angst is “about how to improve the lot of the middle class and those struggling to join it. In different ways, the proposals put forward by Clinton and Sanders address those economic concerns.”

—Heather Haddon contributed to this article.