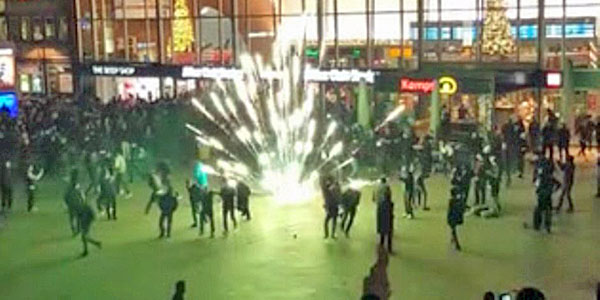 A Swiss artist defied the bitter cold to stage a naked protest outside Cologne Cathedral in Germany. She was supporting women’s rights after more than 100 women were reportedly sexually assaulted on New Year’s Eve.

Milo Moire, an artist and model based in Dusseldorf, held up a sign during her demonstration, which read: “Respect us! We’re not fair game, even when we are naked.”

The 32-year-old, who is of Spanish and Slovak descent, said she was appalled by the events, which took place on December 31. She decided to do something about this to ensure women can live their lives to the full and are not deemed as “sex objects.”

“As a woman I want to give an example that women shouldn’t hide away, they should lift themselves up, be self-confident and stand up for their values,” RT’s video agency Ruptly reported.

“I will not let others decide what I should and shouldn’t do as a woman, but rather, that it is self-evident that the 50 year-long struggle of emancipated women means that I can enjoy the life that I want, in liberty. This is why I am standing here today,” the 32-year-old artist added.

However, not everyone is feeling as empowered as Moire. Sales of pepper spray and blank guns have rocketed in Germany following Chancellor Angela Merkel’s decision in August to open the country’s borders to hundreds of thousands of refugees.

Germany’s Amazon website revealed that nine of the top 10 top selling items in its ‘Sport & Leisure’ section were either pepper spray or CS gas.

Pavel Sverdlov, the director of a gun shop in Berlin, said he has witnessed an unprecedented demand for security devices, which is “really quite exceptional, I’ve never sold so many repellent devices.”

He said sales of blank guns had trebled and he had sold out of pepper spray.

“The most recent events have alarmed many people, especially women,” he said, as cited by Reuters.

Some 121 women were reported to have been robbed, threatened or sexually assaulted by gangs of men of foreign descent, as the people of Cologne prepared to celebrate the New Year in the city’s main square between the railway station and the cathedral.

The German Interior Ministry said on Friday that, out of 32 suspects identified so far, 27 were from North Africa or the Middle East, while 22 were seeking asylum.

A lack of resources prevented police from taking repeated offenders into custody as well as promptly registering all the complaints at the scene, a German police report stated. Witnesses were reportedly threatened when they tried to help identify the perpetrators.

The fallout led to Cologne police chief Wolfgang Albers, 60, losing his job on Friday for his handling of the incident. Albers had also been accused of attempting to hide the asylum seekers’ involvement in the mass sexual assaults.

“As Cologne police chief I have always regarded my work as a service for the Cologne police and people of Cologne. And [that role] also means to take responsibility in difficult times,” Albers said in a statement.

“I accept the facts that in current discussions, officers and myself have come under fire. But police officers who were on duty near the Cologne railway station on New Year’s Eve do not deserve this criticism,” he added.

“What happened at New Year is completely unacceptable,” Merkel told a news conference in Berlin. “The feeling women had in this case of being completely defenseless is for me personally intolerable, and so it is important that everything that happened must come out into the open.”