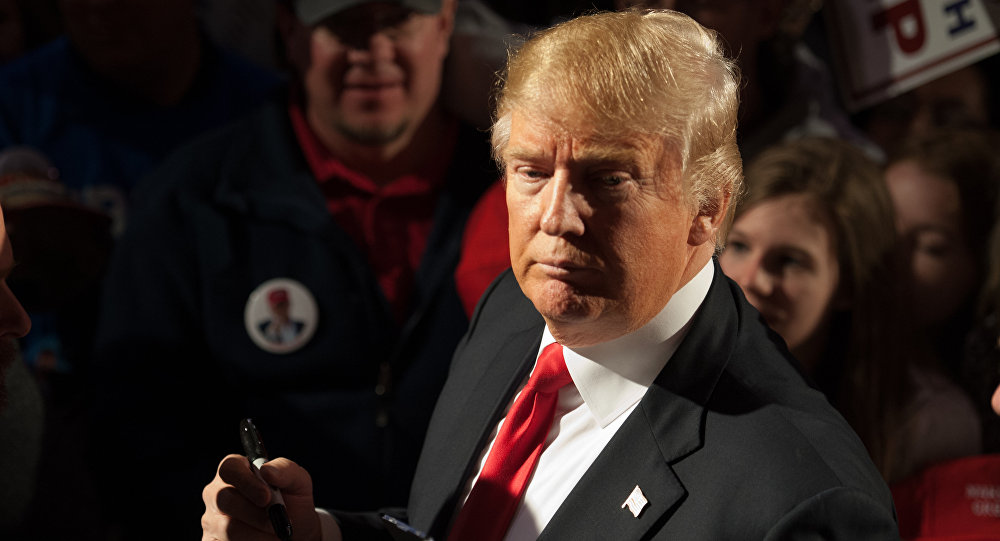 As eccentric billionaire Republican presidential hopeful Donald Trump continues to rack up primary victories, the party’s establishment is beginning to wonder whether the political outsider can be stopped. Alarmed, neoconservative pundit Anne Applebaum goes so far as to suggest that a Trump presidency would mark ‘the end of the West as we know it’. On Saturday, real estate mogul Donald Trump racked up two more primary victories, winning in Louisiana and Kentucky, and thus securing a total of 373 delegates, with establishment candidates Ted Cruz, Marco Rubio and John Kasich trailing with 291, 122 and 33 delegates, respectively.With some pundits now openly asking whether the Republican establishment really has a chance to derail Trump, others, including neocon journalist Anne Applebaum, have resorted to scaremongering.

In a recent op-ed for The Washington Post, Applebaum, an American-Polish journalist known for her hawkish, stridently anti-Russian attitudes, laid out a worst-case scenario for the Euro-Atlanticist empire, warning that “right now, we are two or three bad elections away from the end of NATO, the end of the European Union and maybe the end of the liberal world order as we know it.”

“In the United States, we are faced with the real possibility of Republican Party presidential nominee Donald Trump, which means we have to take seriously the possibility of a President Trump. Hillary Clinton’s campaign might implode for any number of reasons, too obvious to rehash here; elections are funny things, and electorates are fickle.”

“That means,” Applebaum warns, “that next January we could have, in the White House, a man who is totally uninterested in what presidents Obama, Bush, Clinton, Reagan – as well as Johnson, Nixon and Truman – would all have called ‘our shared values’.”

© AFP 2016/ Michael B. Thomas
‘Wouldn’t It Be Nice’: Trump Would Like to Improve Relations With Russia

Blowing through Trump’s domestic policy proposals in one sentence, what seems to interest the journalist more is his approach to foreign policy, particularly as it relates to Russia and Eastern Europe, of course.

“[Trump] brags that he ‘would not care much’ whether Ukraine was admitted to NATO; he has no interest in NATO and its security guarantees. Of Europe, he has written that ‘their conflicts are not worth American lives. Pulling back from Europe would save this country millions of dollars annually’. In any case, he prefers the company of dictators to that of other democrats. ‘You can make deals with those people,’ he has said of Russia. ‘I would have a great relationship with [Vladimir] Putin.'”

The journalist goes on to suggest that “not only is Trump uninterested in America’s alliances, he would be incapable of sustaining them. In practice, both military and economic unions require not the skills of a shady property magnate who ‘makes deals’ but boring negotiations, unsatisfying compromises and, sometimes, the sacrifice of one’s own national preferences for the greater good.” Moreover, “in an era when foreign policy debate has in most Western countries disappeared altogether, replaced by the reality TV of political entertainment, all of these things are much hard to explain and justify to a public that isn’t remotely interested,” Applebaum laments.If by ‘all of these things’ she means endless wars and Washington’s fumbling attempt to preserve its shaky global hegemony, perhaps there’s a little more thought behind American voters’ logic toward anti-establishment candidates than she gives them credit for.

Europe Too Faces the ‘Threat’ of the Anti-Globalists

In Europe too, Applebaum warns, things aren’t looking good for the Euro-Atlanticists.

“Americans aren’t the only ones who find their alliances burdensome. A year from now, France also holds a presidential election. One of the frontrunners, Marine Le Pen of the National Front, has promised to leave both NATO and the EU, to nationalize French companies and to restrict foreign investors.”

“Like Trump,” the neocon writes, “[Le Pen] foresees a special relationship with Russia, whose banks are funding her election campaign. French friends assure me that if she makes it to the final round, the center-left and center-right will band together, as they did two decades ago against her father. But elections are funny things, and electorates are fickle. What if Le Pen’s opponent suddenly falls victim to a scandal? What if another Islamic State attack jolts Paris?”In other words, Applebaum seems to imply, ‘what if, as a result of an attack by the Islamic caliphate which the US-led invasion of Iraq created and US Persian gulf allies have bankrolled, the French people were to vote for a politician opposed to foreign control of French affairs and to the policy of endless imperial adventures around the world?’

As for her jab suggesting that Russia is bankrolling the National Front’s campaign, Le Pen has been very open in her explanation, noting that she took the loan from the private Russian bank because no French bank would give her one. In fact, she has since said, she would cancel the loan with the Russian bank if a French bank were to make a counter-proposition, but she has not received one.

In any case, Applebaum isn’t done. By the time French elections come around, she notes, “Britain may also be halfway out the door. In June, the British vote in a referendum to leave the EU. Right Now, the vote is too close to call –and if the ‘leave vote’ prevails, then, as I’ve written, all bets are off. Copycat referendums may follow in other EU countries too. Viktor Orban, the Hungarian prime minister, sometimes speaks of leaving the West in favor of a strategic alliance with Istanbul or Moscow.”

And for the journalist, “it’s not hard at all to imagine a Britain unmoored from Europe drifting away from the transatlantic alliance as well.”To make things even worse, in Applebaum’s mind, “if the economic turmoil that could follow a British exit from the EU were sufficiently severe, perhaps the British public would vote out its conservative government in favor of the Labour Party, whose leadership is now radically anti-American. Everyone discounts Jeremy Corbyn, the far-left Labour leader, but they also discounted Trump. Corbyn is the only viable alternative if the public wants a change. Elections are funny things, and electorates are fickle.”

Ultimately, the journalist anxiously notes, “without France, Europe’s single market will cease to exist. Without Britain, it’s hard to see how NATO lasts long either. Not everyone will be sorry. As Trump’s appealing rhetoric makes clear, the cost of alliances (‘millions of dollars annually’) are easier to see than the longer-term gains.”