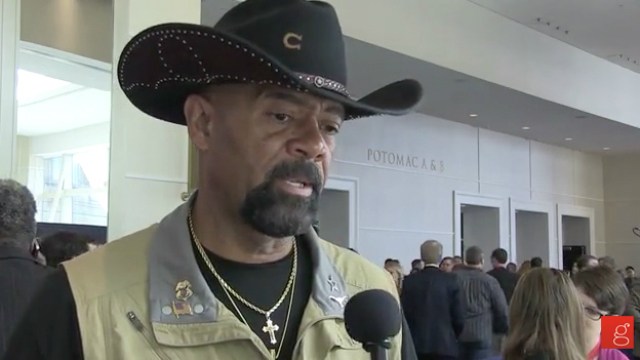 Sheriff David Clarke on Obama in 3 Words: “Reign of Terror”

Milwaukee County Sheriff David Clarke slams Barack Obama whenever he gets the chance, because he understands the damage the 44th president has caused the United States.

Of course, since Clarke is black he is constantly reamed by the Left for disparaging the anointed one.

“Reign of terror” is how Sheriff Clarke describes Obama’s presidency

Barack Obama has deliberately divided the nation across every demographic deliberately as part of his “reign of terror,” the sheriff said.

Many of us, including Sheriff Clarke, were hopeful that he would unite us and improve race relations. Instead, Obama “deconstructed” the bridge that we had built on race relations. Obama obtained political power with the war on women, the war on the rich…it’s been” a very destructive period of time.”

Divide and conquer is the policy of maintaining control over one’s subordinates or subjects by encouraging dissent between them. It is a strategy that breaks up existing power structures and prevents smaller power groups from linking up.

There are plenty of three word phrases to sum up Obama’s presidency these past seven years, but ‘reign of terror’ is pretty solid.

Without a doubt, Clarke will be labeled an ‘uncle Tom’ and a traitor to his race for calling out Obama, but that’s because the mainstream media and Congressional liberal don’t want you to see their true colors.

Thank you for speaking out, Sheriff!