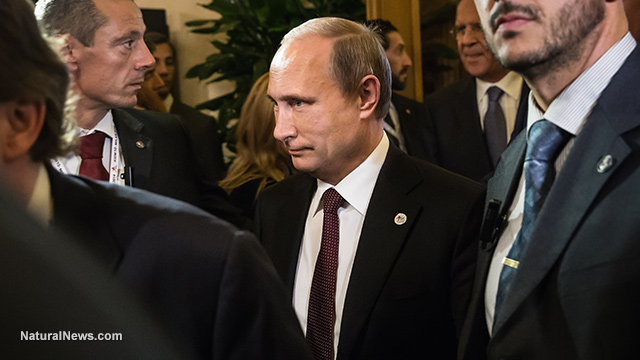 Those who support vaccine choice and oppose genetically modifying our food chain have an unlikely ally: Russian President Vladimir Putin.

As reported by the Health Freedom Alliance, a report that was prepared by the Russian Security Council (SCRF), a report which is currently circulating within the Kremlin, says that Putin has given orders to protect the Russian people from GMO “food” as well as Western pharmaceuticals “at all costs.”

The report states that Putin believes the next phase of human evolution is being put at “grave risk,” and that Western and other great powers are “intentionally decelerating the process for their personal gain.”

“We as a species have the choice to continue to develop our bodies and brains in a healthy upward trajectory, or we can follow the Western example of recent decades and intentionally poison our population with genetically altered food, pharmaceuticals, vaccinations, and fast food that should be classified as a dangerous, addictive drug,” says the report.

“We must fight this. A physically and intellectually disabled population is not in our interests,” the report added.

As further reported by the Health Freedom Alliance:

“Describing the average government-controlled Westerner as an ‘intensively vaccinated borderline autistic fat man slumped in front of a screen battling a high-fructose corn syrup comedown,’ the report states that such tactics used by governments to subjugate their citizens are not only ‘dark/evil’ but ‘counter-productive in the medium to long term.'”

Under Putin, who is a billionaire himself, the Russian government has been giving away land for free over the past few years to anyone who is willing to plant and farm organically and sustainably, with the goal of becoming the world’s “leading exporter” of non-GMO foods that are based on “ecologically clean” production.

The report comes just a few months after the Kremlin announced that it planned to halt production of all GMO foods, seen by the international organic community as a major step in the fight against multinational GMO pushers like Monsanto and Syngenta.

And Russia is continuing to lead the way in organic, natural food production.

At the same time, Putin condemned U.S. food manufacturing, as well as food production in other countries, for no longer offering high quality, healthy and ecologically clean food.

“We are not only able to feed ourselves taking into account our lands, water resources – Russia is able to become the largest world supplier of healthy, ecologically clean and high-quality food which the Western producers have long lost, especially given the fact that demand for such products in the world market is steadily growing,” the Russian leader said in a speech to Parliament.

Putin added that Russia had become a net exporter of food rather than an importer.

“Ten years ago, we imported almost half of the food from abroad, and were dependent on imports. Now Russia is among the exporters. Last year, Russian exports of agricultural products amounted to almost $20 billion – a quarter more than the revenue from the sale of arms, or one-third the revenue coming from gas exports,” he said, noting that the country was on track to becoming completely food-self-sufficient by 2020.

“Three years ago, the Russian government was considering imposing a ban on the participation of foreign drug producers in the tendering for public procurement of drugs if there are already two similar drugs created by local manufacturers,” the Australian site noted. “The measure was meant to encourage international pharmaceutical producers to localize their production in Russia and to reduce the share of imported drugs in the total procurements, which was estimated at around 85 per cent. The initiative was put forward by Russia’s Ministry of Industry and Trade.”