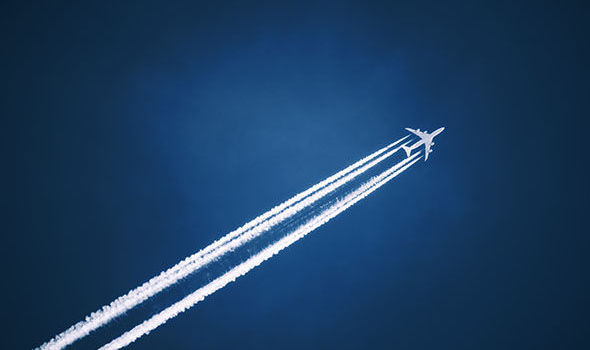 A STAGGERING video claims to have proved the conspiracy theory that jet planes are deliberately blasting chemicals into our atmosphere.

By Jon Austin
Ray Lynch, an inspector in the manufacturing industry, from Huddersfield, West Yorkshire, says a timelapse video he shot from his home proves nano particles are being sprayed into the atmosphere to try to reverse global warming.

At its most bizarre extreme, conspiracy theorists believe that the contrails which form behind jet aircrafts are actually streams of toxic “mind-control” chemicals.

They say these toxins dilute before they reach the ground, leaving a gas we breathe in that keeps the general population in check.

Others suggest we are being secretly vaccinated against diseases from above.

But there are a growing number of chemtrail believers, who claim the conspiracy is actually a secret global plot to change Earth’s climate in the hope it will reverse the effects of global warming.

Dane Wigington, a solar energy expert and former employee of Bechtel Power Corp, now runs Geoengineeringwatch.org, a website set up to expose the “harmful” conspiracy which has millions of visitors. According to Mr Wigington, the contrails, or chemtrails, we see forming behind an aircraft most days are carrying out geoengineering – a genuine scientific term for manipulating Earth’s climate.

An introduction to the subject on his website states: “It sounds like science fiction, but it’s not. It’s happening right above you.”

He said a system called Solar Radiation Management (SRM) was being used whereby scientists tried to mimic the effects of a major volcanic eruption on temperature, by releasing the same chemicals into the atmosphere which are known to block sunlight.

Some people believe it has already been taking place for a number of years, and say the aircraft leave chemtrails -long-lasting trails in the sky.

Supporters of the theory who have tried to expose it to the wider public included the late pop legend Prince along with Hollywood action hero Chuck Norris, as revealed by Express.co.uk today.

Believers of the conspiracy claim the particles include aluminium, which they blame for an alleged rise in cases of dementia.

They claim standard contrails from aircrafts dissipate much more quickly than the so-called chemtrails which it is claimed appear to last longer and spread out into long artificial clouds to “reflect the sunlight”.

In Mr Lynch’s stunning timelapse video, several contrails are seen to form and then slowly disperse into lingering clouds.

The claim is that longer-lasting contrails must contain other substances for this to happen.

Mr Lynch said: “People can say what they want about me, but there is no denying what is on the video.”

He fears the alleged particles, including aluminium, could be absorbed through the skin or breathed in, creating as yet unchecked health implications.

He added: “Aluminium has been linked to Alzheimer’s and dementia, and the rates of both have skyrocketed in recent years.”

He said: “I looked out the window and noticed a trail from an aircraft. A few minutes later, instead of disappearing, it had got lower and bigger.

“I was becoming more and more concerned and wanted to prove to myself that I wasn’t being misled.

“It has taken a long time to get the footage but it shows how the ‘trails’ leave the aircraft then open up while descending creating clouds to block out the sun.”