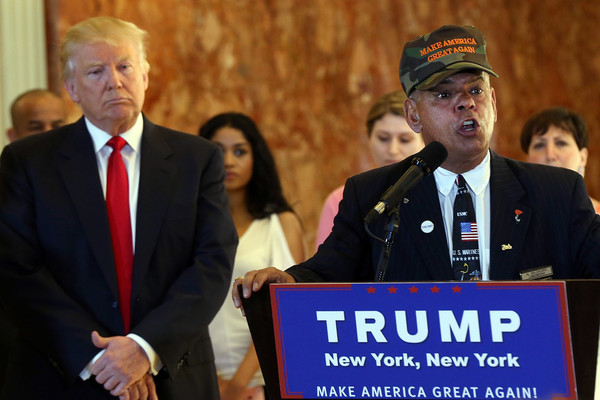 Donald Trump supporter and retired marine Al Baldasaro ripped the press Tuesday for its coverage of Trump’s veterans donations, telling the “liberal media” to “get your head out of your butt.”

Trump claimed at the press conference to have raised $5.6 million for veterans groups. Multiple media reports showed discrepancies between how much Trump had claimed to raise and the actual amount raised, as well as how much money had actually been successfully paid out to veterans groups.

Wearing a camouflage “Make America Great Again” hat, Baldasaro, a Republican New Hampshire state representative, defended Trump against the accusations and said he would never put his name on a candidate who didn’t legitimately care for veterans’ welfare.

“The liberal media is the only ones that have been calling me on the foundation,” he said. “Stop using veterans as political pawns!”

Baldasaro said the Hillary Clinton campaign, which launched a coordinated effort Tuesday to attack Trump’s record on veterans, was also using veterans for its own ends.

“Donald Trump is doing this from the heart,” Baldasaro said. “You’re all focused on the way he’s raising money, and you’re not looking at the 22 veterans that are killing [themselves] every day. You’re not concerned about the thousands of veterans that are on wait lists … I think the liberal media, and I’ve been dealing with you a long time, need to get your head out of your butt and focus on the real issues! Thank you.”