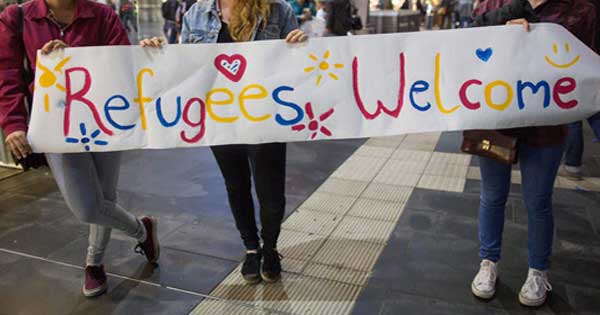 The rape crisis in Sweden and Germany continues unabated, but news of the attacks sometimes doesn’t leak out for weeks, even months.

And sometimes the victims are those you would least expect.

Take the case of a 26-year-old Afghan man who last Thursday was sentenced to 30 months in prison for raping a 20-year-old woman who had let him live in her apartment. The sentence was given by the court in Cologne, Germany, reports Kölner Rundschau.

The migrant came to Germany two years ago, the local news outlet reports, and the contact with the woman came through the group “Refugees Welcome,” or “Flüchtlinge Wilkommen.”

The attack occurred Oct. 25, 2015, when the Afghan rapist sneaked into the 20-year-old woman’s room while she was sleeping.

The story sounds eerily similar to another out of Sweden earlier this month. A mother there, working with a welcoming group, decided to open her home to a male refugee from Eritrea. She made her daughter leave her room so she could offer the child’s room to the migrant. That migrant then decided to sexually assault her 10-year-old daughter, the Daily Caller reported.

In fact, Muslim migrants raping those trying to help them is not that unusual.

A 24-year-old spokeswoman for the socialist “Linksjugend Solid” (“Left Youth Solid”), identified only as “Selin G.” was attacked and gang-raped in a parking lot in February. She reported the crime but two weeks later in a fit of guilt said she identified with her rapists as “victims” of German and Western culture, U.S. Herald reported.

The woman posted an apology on her Facebook page to the three men who raped her, blaming their actions on the “racist” atmosphere and “sexist society” in Germany, beginning the post with, “Dear male refugees, I am so sorry!”

A Norwegian man who is an activist in support of the anti-racist “Welcoming” cause was anally raped earlier this year by a Somali migrant and expressed guilt and remorse that the rapist had been deported back to Somalia. Karsten Nordal Hauken, a member of the Norwegian Socialist Left Party who described himself as an ardent “feminist and anti-racist,” confessed to a documentary team about his despair at seeing the man deported, Breitbart reported.

Daniel Greenfield, a Shillman fellow at the David Horowitz Freedom Center, explored the leftist mentality toward rape at the hands of Muslim migrants in an interview with Jaimie Glazov last month titled “Avoiding Rape is White Privelege.” In that interview, Greenfield said progressives believe it’s impossible for an “oppressed” class of people such as Muslims to commit rape against a white person. They are merely lashing out in violence against those they see as oppressing them.

For this reason, many of the rapes of women volunteering as aid workers in the Palestinian territories and in refugee camps across Europe are never reported or quietly reported without media coverage.

Glazov calls it a “suicidal death wish of the left.”

“This reflects and manifests very much the whole narrative of fellow travelers, of leftists and communists, who are very willing to sacrifice others including themselves on the altar of utopian ideals,” Glazov said.

Greenfield said the leftist activists will usually put their “anti-racist” agenda ahead of their feminist leanings. The feminists, in short, have to take a back seat to the anti-racists and anti-Islamophobes.

“They are very big on guilt and this is Stockholm syndrome in action as the entire left has an obsession with the idea that if a Muslim does something bad then something worst must have happened to the Muslim and therefore the really guilty party is not the rapist – the rapist was probably driven to it – the real guilty party is the privileged party, which is the white guy (or woman) who was raped because of his privilege and now he’s just acknowledging his privilege by feeling very guilty about it, which again is what the left does really well,” Greenfield said.

This exposes inherently racist mentality of the left, Greenfield said, because they are furthering a narrative that says the rapists possess no free will over their actions – they rape uncontrollably because they are from a certain country or background.

Meanwhile, at least 26 German women were sexually assaulted by Muslim migrants at a free concert Sunday in Germany in attacks the Daily Mail described as “similar to those carried out in Cologne over New Year’s Eve.”

More than 500 German women were sexually assaulted on New Year’s Eve in Cologne and several other cities across Germany.

Three Pakistani men are already under arrest after 26 women filed complaints that they had been inappropriately touched, fondled and groped during the festival in the city of Darmstadt.

Police said the number of complainants could rise, and at least two other migrant suspects are being sought.

All the female victims said they were “surrounded” before being “touched and fondled” at the Schlossgrabenfestes music festival.

The three men arrested were said to be between 28 and 31 and are Pakistani nationals seeking asylum in Germany.

Media reports said more women are expected to come forward to file criminal complaints after they were groped at the festival, a four-day event.

In 1975, before Sweden began experimenting with a multicultural immigration policy, it was one of the safest countries in the world.

Sweden and Denmark now have the highest rates of sexual assault in the European Union, according to a study by the European Agency for Fundamental Rights. The findings were based on data from 2012 that was published in 2014.

Sweden, once a peaceful, low-crime welfare state, has come to be known as “Absurdistan” by critics of its extreme multicultural policies that ignore the economic and social interests of Swedes in favor of migrants.

Last year, 163,000 asylum seekers came to Sweden and the expectation is that between 70,000 and 140,000 will come this year, to a country with a total population of just 9.5 million. Germany has taken in many more Muslim migrants, more than 1 million over the last year, but its population is 80 million, so Sweden has actually transformed itself at a faster rate based on per capita population.

“One of the things Swedes are most scared of is rape,” says Carlqvist.

Even though it’s illegal for police in Sweden to keep stats on the ethnic background, immigration status, or religion of criminals, Carlqvist says it’s the worst-kept secret in Sweden as to who is responsible for the near-1,500 percent increase in rapes.

“Almost every day we can read in the alternative media about rapes of Swedish women and girls, committed by asylum seekers or other migrants from the Third World,” she said.

Up until a few decades ago, no one had ever hear of gang rape, she said. Now it happens every week.

“This has of course been going on for many years but the swedes have been so brainwashed by the government and the main-stream media that no one has protested about the rape on Sweden. But that has all changed. These days, no one can escape the horrible realities. Just a few of miles from here is a little village that used to have 900 inhabitants but last year the authorities placed 400 asylum seekers in that little village. That means that almost half of the total population is now people from Somalia, Eritrea, Afghanistan and Syria. It’s really turned the whole village upside down. I have talked to people who lived and work around there. At first, they were happy to welcome people to their part of the world. They arranged lunches and Christmas celebrations and donated clothing to the migrants. Now, many of the locals are afraid and confused. With tears in their eyes they tell me how their friendly village has been totally transformed by these young, aggressive, male asylum seekers. The asylum seekers scream at the locals, call the women whores, they steal from the shops, and don’t seem at all grateful or happy to be here. Many wonder what these asylum seekers expected when they arrived in Sweden.”

The Daily Svenska Dagbladet interviewed “Salar from Iraq,” who complained:

“We can’t sit here and wait for the decision on resident permits indefinitely… We sit at the asylum house all day long and do nothing. Our children have nothing to do, there is no playground there. And the food that is served here is strange, it doesn’t look like the kind of food we are used to.”

“The people here, they wonder if peace will ever come back to this place,” Carlqvist said.

The situation in Germany is getting so bad that some Germans are leaving in a rare case of “reverse migration.” According to Hungary Today, the number of Germans inquiring about emigrating to Hungary is on the rise.

Munich-based broadcaster Bayerische Rundfunk aired a report last week that documents an increasing number of Germans moving to the Lake Balaton area of Hungary, citing their dissatisfaction with the German government’s asylum policy and a fear of migrants.

The German reporter says Germans generally appreciate the good weather and low costs near Lake Balaton, as well as the presence of a relatively large German community. But recently they have also begun taking into account the fact that the vast majority of Hungarians are Christians and “there are hardly any migrants” in Hungary.

Hungarian Prime Minister Viktor Orban has been vilified by the establishment media for saying he wishes to protect Europe from the invading migrants and preserve Hungary a Christian nation.

That’s because Hungary, led by no-nonsense Prime Minister Viktor Orban, is building a razorwire fence along its southern border with Croatia, Serbia and Romania, stopping the migrants in their tracks and infuriating the European Union’s globalist leaders. The globalists running the E.U. have roundly criticized him for “splitting Europe in two” and stopping the free flow of migrants into their continent.

Orban has said he wants to preserve Hungary’s Christian heritage, and he will only accept Christian refugees from the Middle East.

Once the fence is completed, migrants will only be able to travel further into Europe by squeezing through a sliver of Slovenia to the West, or risking the trek through war-torn Ukraine to the East.

Hungary has also implemented a no-nonsense deportation system that allows it to boot illegal aliens from the country within hours, the U.K.’s Express reports.

Orban has also been pilloried by globalist publications in the U.S. including the New York Times and Foreign Policy magazine.