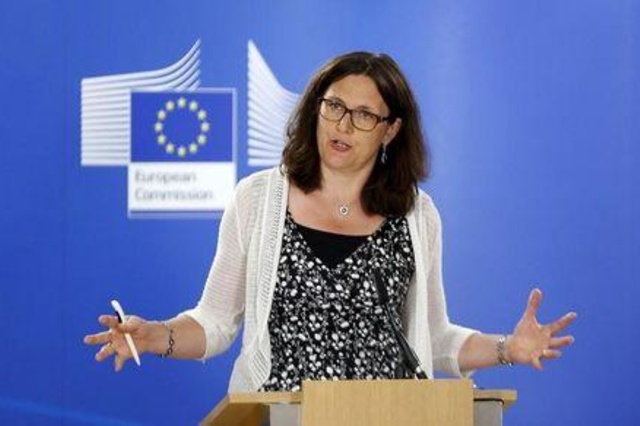 BEIJING (Reuters) – The European Union’s trade chief described populist movements in the United States and elsewhere as “a recipe for isolation and failure” on Monday even as she sought to allay fears about Britain’s exit from the EU during a trip to China.

Cecilia Malmström, the commissioner for trade, made the remarks before the EU’s annual summit with China, where the two sides are expected to make progress on a major investment deal and discuss issues from steel overcapacity to China’s island-building in the South China Sea.

Asked by a student about the possibility that presidential candidate Donald Trump could become the United States’ next leader, Malmström said that populists coming to power around the world could lead to the closing of borders.

“The debate in the U.S. today personified by candidate Trump is one of strong criticism against globalisation, against trade. The effects of the global crisis have hit many people really, really hard,” Malmström said. “Many populists around the world prey on these feelings, on these fears.”

If populists come to power, “that is a clear recipe for isolation, for failure, and for less prosperity,” she added.

However, she said that China and the EU must maintain close ties with the U.S. whether Trump or Democrat Hillary Clinton wins the White House.

Opposing trade deals has generated controversy within Trump’s own Republican Party, but won him supporters among American voters concerned about the loss of manufacturing jobs at home.

Also on Monday, Malmström called Britain’s decision to leave the European Union a “little moment of uncertainty”, and she sought to allay fears it would hurt the EU’s relationship with China.

The Brexit vote will not impact the E.U.’s trade commitments to China in future, she said, adding that Britain will remain part of the EU for at least two years.

Malmström also criticised China, saying the country had to provide a level playing field for European companies before a free trade agreement could be put on the table.

New rules on cybersecurity, non-governmental organisations and national security were “steps backward”, she added, saying the business environment for European companies had worsened in the country.