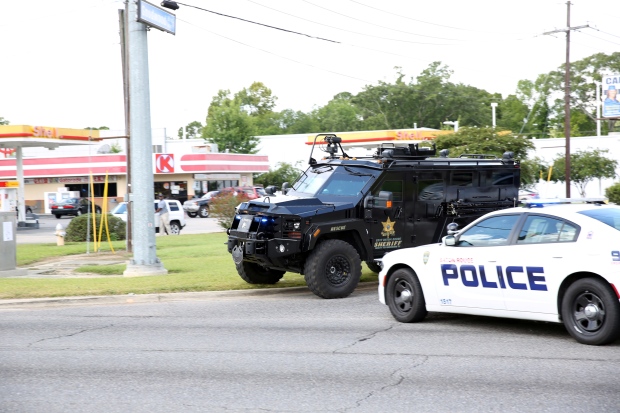 A terrified woman at the scene in Louisiana this afternoon can be heard saying: “This man is shooting at the police. He is military”

This is the panicked moment an eyewitness at the scene of the Baton Rouge police shooting took to Facebook Live, describing the scene and claiming the shooter “looks like a ninja”.

The attack, in Louisiana, has seen three police officers killed with a manhunt now underway.

A woman who was at the scene took to Facebook Live to stream a video to her friends, which was later broadcast on news networks.

She can be heard in a panicked voice saying: “They’ve got a sniper over here. I don’t cuss on my Facebook… I’m nervous. Y’all gonna have to excuse me. Look at this.

“This man is shooting at the police. He has a mask on, looking like a ninja baby. He is military. I don’t know who this man is.

Follow our blog for live updates on Baton Rouge here

Another witness told WBRZ News 2 that a man dressed in black and with his face covered began shooting indiscriminately after walking out of a convenience store and car wash.

Several gunshots can be heard ringing out one by one in other footage.

Other vehicles can be seen speeding away for safety, with another video showing a SWAT team vehicle racing towards the scene.

A witness told CNN: “There is still an active scene. They are investigating.

“Right now we are trying to get our arms around everything. It’s just been one thing after another.”

witter user Kelsei LuBom, who is from Baton Rouge, wrote: “Whoever it was they was shooting indiscriminately.

“My aunt is a emergency nurse at the lake (an apparent reference to Our Lady of the Lake Regional Medical Center) & she told me at least 6 are there now.”

She later added: “To my knowledge they’ve caught one!”

Within the last minute, at least a dozen marked and unmarked police units have flown by @WBRZ pic.twitter.com/18aZAyhTtj

The incident began at around 9am local time between Baton Rouge Police Headquarters and the I-12 road.

Mayor Holden added: “We’re asking citizens to stay away from that area. And as it’s Sunday we’re asking people to pray for the families and officers.”

Tensions are high in Baton Rouge after the killing of 37-year-old Alton Sterling by police.

However no clear motive for the shooting has yet been established.