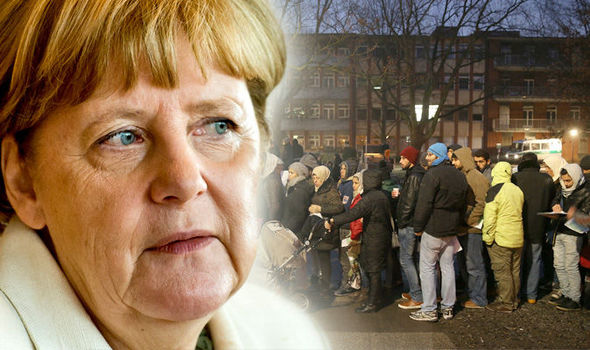 MIGRANTS could set the German economy back by more than a trillion pounds after last year’s wave of refugees, an economist had warned.

The western nation has experienced its longest boom since the sixties, as employment reached a new high and social security reported record revenues.

But Mr Raffelhüschen claims the tables could soon turn as Germany begins to take into account the cost of the refugee wave of 2015.

He states the long term costs of the original crisis totals around €878 billion, which threatens to soar up to €1.5trilllion depending on how well the “second generation” fits in with life in Germany.

Last year, according to the Federal Office of Statistics, 2.1million immigrants entered the country – of which more than half were refugees.

Now the economist claims a controlled immigration system to limit the flow of refugees could help to solve Germany’s economic problems.

He states that migrants will pay less into the system than native Germans during their lifetime, as foreigners living in the state create a negative fiscal balance.

Even though natives will receive higher pensions, since they on average have paid in more during their lifetime, overall the government can profit more from the Germans than from “foreigners”.

Mr Raffelhüschen said: “Politicians now have to ensure the best possible integration to at least curb the costs partly.

The foundation Marktwirschaft also believes Germany is not profiting from the strong wave of migrants.

However, immigration is not the only cause for concern for Germany’s money woes.

Struggling Deutsche Bank has closed nearly 200 branches amid fears it could be on the brink of collapse. Shares in Deutsche Bank fell by more than 40 per cent

The bank has confirmed 51 of the 188 closing due to share prices plummeting by 48 per cent are in the North Rhine-Westphalia region.

Around 3,000 full time jobs will be axed, and the bank has also pulled out of 10 foreign markets including Russia and Australia.

Financial expert Max Keiser has poured cold water on their claims, saying the bank is “technically insolvent” and runs a “ponzi scheme”.