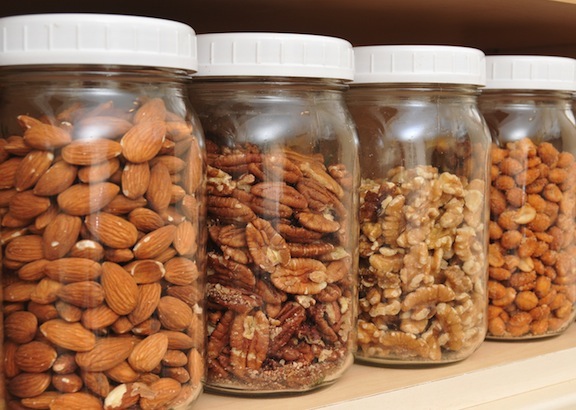 A handful of nuts a day could slash the risk of heart disease, cancer, obesity and more by up to 30%

Eating just a handful of nuts daily can cut your risk of cancer and heart disease by as much as 30 percent, according to a study conducted by researchers from Imperial College London and the Norwegian University of Science and Technology, and published in the journal BMC Medicine.

The maximum benefit came from eating just a single ounce (20 g) per day. The risk of diabetes, respiratory disease and premature death was also decreased.

“We found a consistent reduction in risk across many different diseases, which is a strong indication there is a real underlying relationship between nut consumption and different health outcomes,” said co-author Dagfinn Aune. “It’s quite a substantial effect for such a small amount of food.”

You don’t have to eat very much

The benefits for other diseases were even greater, though not as statistically robust. Nuts cut the risk of diabetes by almost 40 percent, and the risk of respiratory disease by 50 percent.

“In nutritional studies so far much of the research has been on the big killers such as heart disease, stroke and cancer, but now we’re starting to see data for other diseases,” Aune said.

Little or no health benefits were seen from eating more than an ounce per day.

A growing body of research points to a wide range of health benefits from nuts, which are high in protein, fiber, antioxidants and anti-inflammatories. They are also a key component of the Mediterranean diet, which has been linked to a wide range of benefits against chronic diseases such as cancer, heart disease and dementia.

“Some nuts, particularly walnuts and pecan nuts, are also high in antioxidants which can fight oxidative stress and possibly reduce cancer risk,” Aune said. “Even though nuts are quite high in fat they are also high in fibre and protein and there is some evidence that suggests nuts might actually reduce your risk of obesity over time.”

Nuts have been called a superfood, and some experts are even calling for doctors to start prescribing them, and for their cost to be covered by health insurance.

“This analysis adds further value to scores of clinical studies that reveal the positive health impact of regular nut consumption,” said British cardiologist Aseem Malhotra, who was not involved in the study. “Their mechanism of benefit appears to be through anti-inflammatory properties. It’s time doctors started prescribing nuts to patients which will not only help prevent heart attacks and deaths within a short space of time but combined with other lifestyle interventions would save the NHS billions.”

Nearly all research into the benefits of nuts has been conducted on adults. But at least one study, released in 2015, found that nuts provide important protective benefits for adolescents, as well. That study found that adolescents who ate just 12.9 grams per day cut their risk of metabolic syndrome by more than 50 percent. The benefits increased as the teenagers ate more nuts, then dropped off if they consumed more than 50 grams (1.8 ounces) per day.

Metabolic syndrome is a cluster of symptoms linked to the risk of heart disease and diabetes. One in nine U.S. teenagers now suffers from the condition.