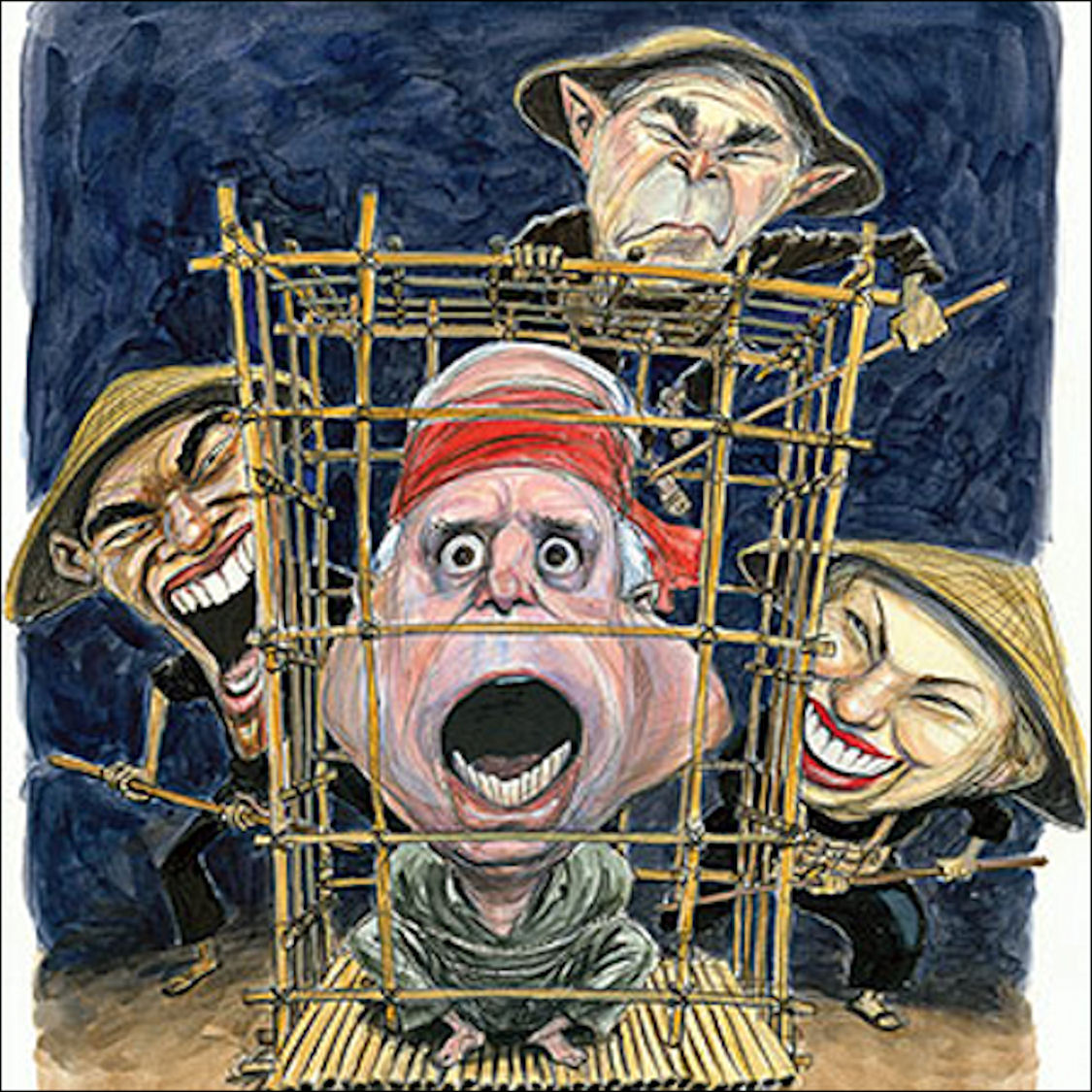 Excerpt from “Faith of My Fathers” by McCain

“Hero” John McCain as Phony and Collaborator: What Really Happened When He Was a POW? – CounterPunch 6/13/08

EXCERPTS: “on March 25, 1999, two of his fellow POWs, Ted Guy and Gordon “Swede” Larson told the Phoenix New Times that, while they could not guarantee that McCain was not physically harmed, they doubted it. As Larson said, “My only contention with the McCain deal is that while he was at The Plantation, to the best of my knowledge and Ted’s knowledge, he was not physically abused in any way. No one was in that camp. It was the camp that people were released from.”Guy and Larson’s claims are given credence by McCain’s vehement opposition to releasing the government’s debriefings of Vietnam War POWs. McCain gave Michael Isikoff a peek at his debriefs, and Isikoff declared there was “nothing incriminating” in them, apart from the redactions.

McCain had a unique POW experience. Initially, he was taken to the infamous Hanoi Hilton prison camp, where he was interrogated. By McCain’s own account, after three or four days, he cracked. He promised his Vietnamese captors, “I’ll give you military information if you will take me to the hospital.”His Vietnamese capturers soon realized their POW, John Sidney McCain III, came from a well-bred line of American military elites. McCain’s father, John Jr., and grandfather, John Sr., were both full Admirals. A destroyer, the USS John S. McCain, is named after both of them. While his son was held captive in Hanoi, John McCain Jr., from 1968 to 1972, was the Commander-in-Chief of U.S. Pacific Command; Admiral McCain was in charge of all US forces in the Pacific including those fighting in Vietnam. ..The Admiral’s bad boy was used to special treatment and his captors knew that. They were working him.For his part, McCain acknowledges that the Vietnamese rushed him to a hospital, but denies he was given any “special medical treatment.” However….two weeks into his stay at the Vietnamese hospital, the Hanoi press began quoting him. It was not “name rank and serial number, or kill me,” as specified by the military code of conduct. McCain divulged specific military information: he gave the name of the aircraft carrier on which he was based, the number of US pilots that had been lost, the number of aircraft in his flight formation, as well as information about the location of rescue ships…

On the other hand, according to one source, McCain’s collaboration may have had very real consequences. Retired Army Colonel Earl Hopper, a veteran of World War II, Korea and Vietnam, contends that the information that McCain divulged classified information North Vietnam used to hone their air defense system…McCain told his North Vietnamese captors, “highly classified information, the most important of which was the package routes, which were routes used to bomb North Vietnam. He gave in detail the altitude they were flying, the direction, if they made a turn… he gave them what primary targets the United States was interested in.” Hopper contends that the information McCain provided allowed the North Vietnamese to adjust their air-defenses. As result, Hopper claims, the US lost sixty percent more aircraft and in 1968, “called off the bombing of North Vietnam, because of the information McCain had given to them.”

‘When John McCain was my captive‘: interview with former head of Vietnamese prison ‘Hanoi Hilton’ – BBC 6/23/08

EXCERPT: “But I can confirm to you that we never tortured him. We never tortured any prisoners.” Mr Duyet reminisces instead about how he often summoned the future US presidential candidate to his private office for informal chats….So is Mr Duyet implying that that Senator McCain lied about his treatment at the Hanoi Hilton? “He did not tell the truth,” he says. “But I can somehow sympathise with him. He lies to American voters in order to get their support for his presidential election.”

“When two U.S. Army enlisted men were captured by the Viet Cong in 1963, they were plunged into an ordeal that would prove to be a relentless trial of body and spirit by torture. Once they were finally freed, however, their trials began all over again, when their statements critical of the U. S. Vietnam policy landed them in a military court facing a capital offense for violating the military Code of Conduct by “aiding the enemy.”

But, if your name is John McCain and your father and grandfather were famous admirals, violating the Code of Conduct by “aiding the enemy” translates into fodder for a political career, book deals, and adulation bordering on sainthood. Even though news reports of McCain collaborating with the enemy continued from the time he was captured in 1967 through 1970, the Navy never considered prosecution as an option.

Instead, Pentagon pencil pushers chose a political spin that lifted McCain, the former POW turned U.S. Senator, up to a glorified pedestal where he sprouted a halo and wings and became America’s “POW-hero” and today a presidential candidate.

No such luck for the two lowly “grunts.”

SANTOLI: But on the Senate side, we had one person standing in the way of getting in positions that would have been very tough on government bureaucrats who didn’t tell the truth. And that one person was Sen. John McCain.

Cpl. BOB DUMAS, U.S. Army (Ret.): He didn’t want nobody to check his background because a lot of the POWs that was in the camps said he was a collaborator of the enemy. He gave the enemy the information they wanted.

Dr. JAMES LUCIER, former U.S. Senate Chief of Staff: But We do know that when he was there [in the Vietnamese prison], he cooperated with the communist news services in giving interviews there, ah, not flattering to the United States.

USRY: Information shows that he made over 32 tapes of propaganda for the Vietnamese government. Certainly, you do what you need to do to stay alive. Nobody would fault anybody for that. But there comes a point in time when enough is enough.

REP: DORNAN: They made those transcriptions, and in the transcriptions, I heard a POW who heard them comin’ into his cell and said, “Oh, my God, is that Admiral McCain’s son? Is that the admiral’s son? Is that Johnny — telling us that our principal targets are schools, orphanages, hospitals, temples, churches?” That was Jane Fonda’s line. Where are those transcriptions? Believe me — they’re in the archives of the museum, the bragging military phony museum in Hanoi. McCain could not have wanted those [to] turn up in the middle of a presidential race. He knows that. I know that, and a few other people know that, and that’s why he went against Bob Dole’s legislation.

DUMAS: And he didn’t want nobody looking into his background in that camp, what went on in that camp. That stuff is still classified so nobody can see it. And he just had it classified forever, so nobody’ll ever look at it.

REP: DORNAN: This sounds so good at first. McCain was offered the chance to come home. They called him the “Prince.” And he could have. But nobody ever takes that one step beyond that. If John … Admiral John McCain II … “Junior” … if his son, a lieutenant senior grade, had accepted this princely status and come home in 1967 while the others would sit there for five years, what would the Navy have done, with the son of an admiral who opted to get special treatment and come home? No Navy career. No House seat. No Senate seat. It would have been the end of his career. [Edit.] And they were offering him this chance to go home in one of three groups that came home in ‘68.

SANTOLI: They were all collaborators.

REP. DORNAN: And McCain called them this — except for Bill Kagill [phonetic] — the “slipperies,” the “slimies” and the “sleazies.” I once forgot one of those names — and he refreshed my memory. The slipperies, the slimies and the sleazies. So that meant that he would have become a slimy, a sleazy and a slippery, ruining his career and the admiral’s son goes home. What I’m saying is, yes — he chose to stay. But did he have an alternative if he ever wanted to have a life? And what would it have done to his father?

DOUGLASS: And his activities were sufficiently consistent and widespread in opposing efforts to learn the truth that he was written up in a number of articles as a Manchurian candidate in this issue.

REP. DORNAN: In Hanoi, he saw McCain turn red in the face. He even used the term “Rumblestiltskin” [sic], jumping up and down in place in a rage: “If you release any of these records that you have here in Hanoi on me or the other POWs, you will NEVER get diplomatic recognition.”

USRY: McCain may have been an expert on being a prisoner of war but he was by no means an expert on the POW issue.”

“McLamb said the POW’s told him that McCain had sustained two broken arms and a leg injury from not pulling his arms in when he bailed out of his A-4 Skyhawk that was shot down over the Truc Bach Lake in Hanoi. The POW’s said that McCain made 32 propaganda videos for the communist North Vietnamese in which he denounced America for what they were doing in Vietnam.”…”Several Vietnam veterans groups do solely exist to expose McCain’s abandonment of veteran’s interests as well as his lies about being tortured, including Vietnam Veterans Against John McCain and U.S. Veteran Dispatch. “

In fact, McCain’s own account confirms he broke his own arms while ejecting from his plane.