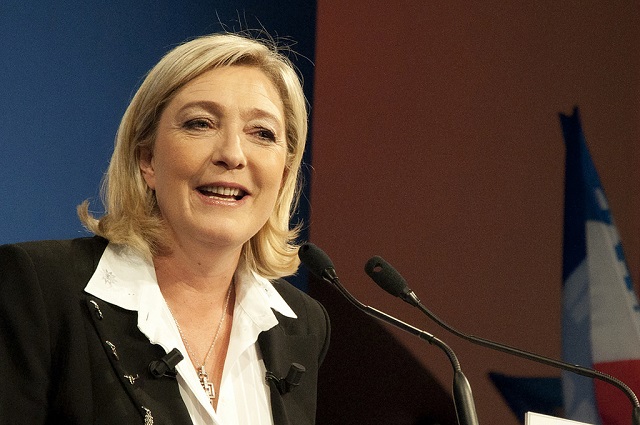 Unlike Bernie “No Refunds” Sanders, France’s far-left candidate Jean-Luc Melenchon did not sell out his supporters by telling them to vote for establishment shill Emmanuel Macron.

If most of them sit out the election, which polls show they very well could, it could hand Marine Le Pen a win.

Far-right populist Marine Le Pen is behind in the polls and an outsider to win France’s presidential elections Sunday.

But she still has a slim path to victory, according to experts, one that shares similarities with the more ardent left-wing supporters of Sen. Bernie Sanders in the U.S. election last year.

Polls predict Le Pen will get around 40 percent of the vote, a huge increase on her party’s previous performances, but not enough defeat centrist front-runner Emmanuel Macron, who is tipped to score around 60 percent and win the presidency.

Although unlikely, a victory for Le Pen would represent a political earthquake not just in France, but across Europe and beyond. As a populist, she sees herself as a continuation of the movement that elected President Donald Trump, whose victory she hailed as “an additional stone in the building of a new world.”

One way Le Pen could win is if enough French voters stay home — apathy and voter abstinence are her friends.

Who would vote for this clown? A vote for Macron is a vote to make the French dystopian novel “The Camp of the Saints” France’s new reality.

Le Pen and her Front National party already received a boost in this regard, when Jean-Luc Mélenchon, the far-left candidate defeated in the first round of voting, refused to tell his supporters to back Macron.

This broke with a French tradition known as the “Republican Front,” where voters from the left, center and center-right club together to keep the far-right from power — a lesser-of-two-evils voting tactic.

Mélenchon’s silence appears to have had an effect. On Tuesday, a poll revealed two-thirds of his supporters planned to spoil their ballots or abstain entirely.

…Some 35 percent of people who supported scandal-plagued conservative François Fillon in the first round are also planning to stay at home, according to Antonio Barroso, managing director at Teneo Intelligence, a New York-based think tank.

“A high level of abstention is still the biggest threat that Macron faces,” he said. “But the threat does not come from Mélenchon’s voters only.”

Don’t forget Obama’s ordering the British people not to vote for Brexit had the opposite effect, and he endorsed Macron earlier this week.