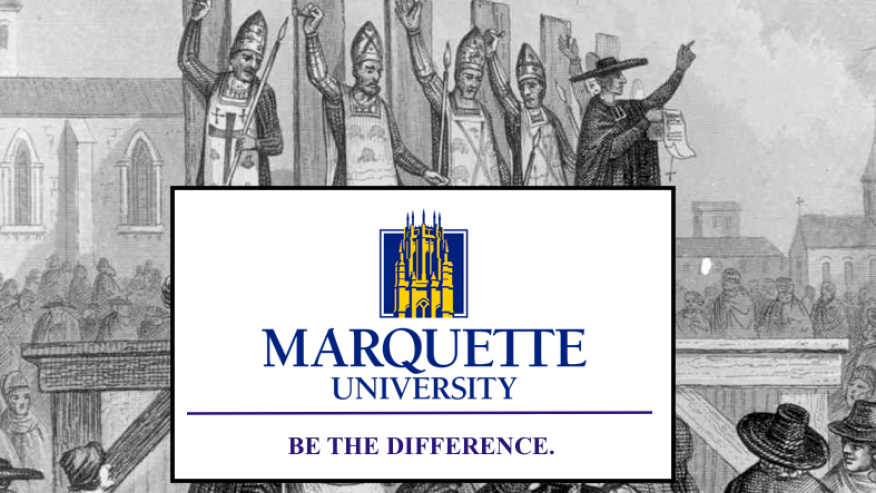 Everyone, this is happening in America.

A judge in Wisconsin voted in favor of the suspension of a Marquette University conservative professor who was asked to confess his guilt and apologize for his political views.

Here’s some background from a previous TruthRevolt report:

Because one of its professors defended a student’s view of traditional marriage against a leftist philosophy instructor deeming it homophobic, Marquette University has threatened the conservative professor’s job unless he confesses “guilt” for being “reckless” and causing “harm” to the offended instructor.

This incident dates back to November of 2014, when Professor John McAdams wrote a blog post chiding instructor Cheryl Abbate for trying to silence one of her students by telling him “some opinions are not appropriate.” The exchange was secretly recorded by the student and McAdams was able to hear what was said and included those quotes in his blog…

“Abbate, of course, was just using a tactic typical among liberals now. Opinions with which they disagree are not merely wrong, and are not to be argued against on their merits, but are deemed ‘offensive’ and need to be shut up.”

McAdams was put on paid suspension over the blog post, and has so far refused to comply with the university’s demands to get his job back. He has filed a lawsuit against his employer. Campus Reform states that “Milwaukee County Circuit Court Judge David Hansher ruled Thursday that the Faculty Hearing Committee was justified in suspending McAdams, despite evidence of clear bias among its members.”

“This is another example of the increasing unwillingness of colleges to stand up for free speech,” McAdams said after the ruling. “Hardly a day passes without an example of a speaker being shouted down, or disinvited, or a student being punished for some innocuous (but politically incorrect) comment on social media.”

The organization representing the professor, the Wisconsin Institute for Law and Liberty (WILL), sent out a press release condemning the judge’s decision:

If a professor can be held responsible for the actions of every person who reads or even hears about what the professor writes, then they have no protections at all. By that standard, every professor who was publicly critical of McAdams should be fired too.

But alas, the Left has no standards, only hypocrisy, as exemplified by WILL’s statement which noted how the court ignored the professor on the Faculty Hearing Committee which is demanding McAdams apologize who signed an open letter harshly critical of the professor.

“Like the rest of academia, Marquette is less and less a real university,” McAdams said about the ordeal. “And when gay marriage cannot be discussed, certainly not a Catholic university.”