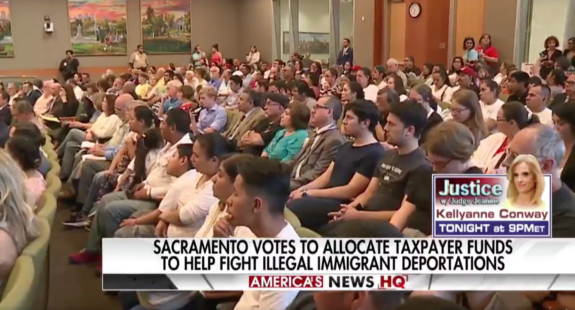 Sacramento can now be added to the list of cities that have officially lost their minds.

Sacramento has approved the use of taxpayer money to help pay legal defenses for ILLEGAL immigrants who are to be deported.
The Sacramento City Council decided in a unanimous vote (that did not include every individual in the city’s say) that $300,000 should be taken from the general fund to “provide urgent legal and support services to Sacramento families facing the immediate threat of separation due to deportation”.

The plan, backed by the mayor, fits a trend of local and state lawmakers taking similar action. As the Trump administration separately faces a court setback in its bid to cut off federal funds to sanctuary cities, those jurisdictions are only doubling down.

In Sacramento, Councilman Eric Guerra told Fox News in an email that their move to assist with legal defense reflects a “commitment to treat all Sacramento residents equally and with the dignity and respect they deserve.”

The only problem with this logic is the fact that these are not U.S. citizens, and it shouldn’t matter if a family gets split up. Let the whole family go back as one unit. This shouldn’t land on the shoulders of taxpayers. We are financing international crime. We are financing the rape of our citizens. We are financing violence that should not be here in the first place. If it came from inside the U.S., by a U.S. citizen, we would deal with it accordingly, but we shouldn’t have to clean up the mess of someone who came here illegally.

Many are referencing the Catholic Church as a way to pull at the heartstrings of people of faith, however, the Pope has a dangerous globalist view. Law and order and protecting our borders is morally the right thing to do