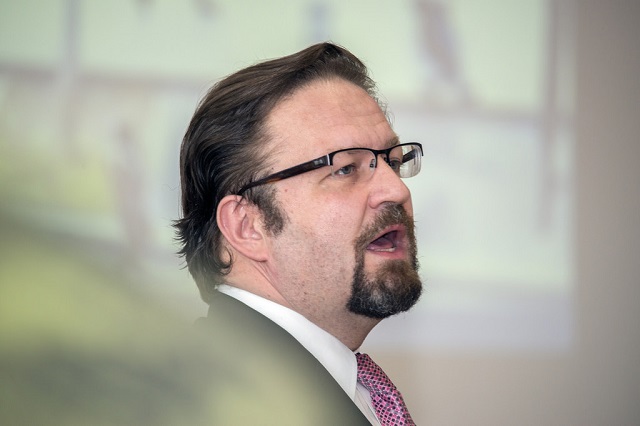 Trump, Bannon ‘Personally Intervened’ to Save Seb Gorka’s Job, But Kushner Wants Him Out

The Daily Beast is reporting President Trump and Steve Bannon “personally intervened” to save counter terrorism adviser Sebastian Gorka from losing his job, though Trump’s son-in-law Jared Kushner still wants him out.

Is Trump finally fighting back?

From The Daily Beast:

When the White House backed off its efforts to dump Sebastian Gorka on another federal agency, the controversial counterterrorism advisor had the president himself to thank, The Daily Beast has learned.

After news emerged last week that the Trump administration was setting the stage to move the British-born national security aide out of the White House, President Donald Trump and his chief strategist Stephen Bannon “personally intervened” to put a halt to Gorka’s White House eviction, two senior administration sources said.

Last Friday, The Daily Beast broke the news that the Trump administration had been actively exploring options to remove Gorka from the West Wing, where he serves as “deputy assistant” to the president, and place him at another federal agency. News of Gorka’s looming departure from the White House came amid security clearance issues and a mounting controversy over his involvement with a far-right Hungarian group notorious for its collaboration with the Nazi regime during the World War II. Gorka also holds fringe, clash-of-civilization views that many have criticized as anti-Muslim and extreme.

Even though Gorka’s somewhat of a neocon, he’s said he views crushing ISIS as the number one priority — as opposed to say, fighting a proxy war with Russia in Syria as a psychotic neocon like HR McMaster desires. Incidentally, Mike Cernovich is reporting McMaster, who he said earlier this week may leave the White House, was kept out of “several White House meetings at the President’s request.”

McMaster has been kept out of several White House meetings at the President’s request.

POTUS also did not invite McMaster to join him, although KT McFarland traveled with the President.

Perhaps a counter-coup is taking place.

…Following The Daily Beast’s initial report last week, rumors swirled that Gorka’s expulsion from the White House was mere moments away. That’s when Bannon stepped in.

“[Bannon] put a stop to it—he’s loyal and a friend’s job was in danger and reputation was getting dragged through the mud,” another Trump administration official said, noting that Bannon had acted “decisively” to lobby for one of his ideological and personal allies in the West Wing. Trump then privately assured Gorka that his job was safe for now.

It was at this point that interagency chatter regarding moving Gorka out of the White House abruptly ceased.

According to multiple administration sources, a White House faction led by Jared Kushner, Trump’s son-in-law and senior adviser, isn’t pleased with this development. Kushner, who warred with Team Bannon last month, also co-founded with Bannon the Strategic Initiatives Group, an informal think tank within the White House. Though Gorka was a member of the group, one White House source says Kushner now views him as a “clown” and wants nothing to do with him.

Indeed, there’s no greater political expert than a 36-year-old Democrat with a Bachelor of Arts degree in government who has nepotism to thank for his entire lot in life.

As I said, I don’t particularly like Gorka when I see him on TV. He cheered the Syria strikes, for example.

Nonetheless, he appears to be a Trump loyalist who is probably not going to stab him in the back like all the “qualified” neocons and Goldman Sachs Democrats he picked for the rest of his cabinet.

We know now Trump really should have picked a cabinet entirely of loyalists as the real battle he had to face after winning was not just taking on the establishment Republicans and Democrats in Washington but taking on the deep state.