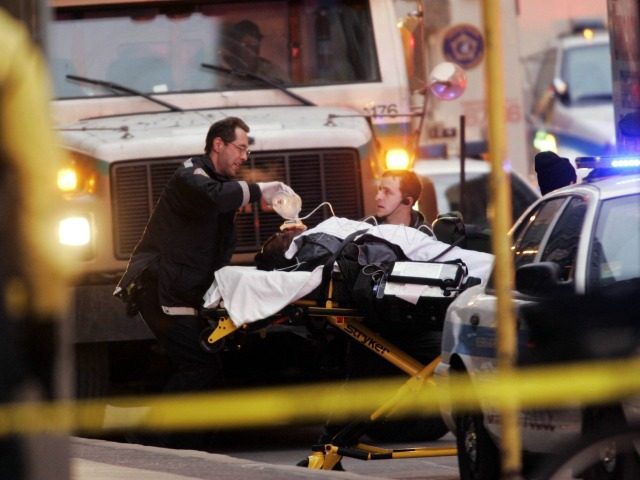 Ten people were shot–two fatally–on Sunday during a memorial for a Chicago man who had been shot and killed earlier in the day.

The shooting at the memorial occurred in Brighton Park around 5:20 pm.

The Chicago Tribune reports that the memorial was being held for Daniel Cordova, who was killed when “two people fired rifles from an alleyway” earlier on Sunday.

After shots rang out at the memorial, a 25-year-old male was dead and a 29-year-old female lay fatally wounded; she died at Stroger Hospital. Eight others were wounded by gunfire. All eight were between the ages of 19 and 26 and all were listed in “good condition.”

The violence in gun-controlled Chicago has resulted in multiple dead and wounded over the course of a short period of time again and again already this year.

On February 22 alone, seven people were shot to death and 13 others were shot and wounded. A pregnant woman was among the dead.

On March 31, Breitbart News reported that two sons were shot to death in front of their mother. Nineteen-year-old Raheem Jackson and 20-year-old Dillon Jackson went to the restaurant where their mother worked to say hello and eat. They were killed just outside the restaurant while their mother looked at them through a window. And on April 15–during an 18 hour period beginning at 2:30 a.m.–29 people were shot in Chicago, one fatally.  The Tribune reported that some of the shooting victims were as young as 14.

On April 25 Breitbart News reported that Chicago Mayor Rahm Emanuel (D) responded to the ongoing gun violence by calling for more gun control. He is specifically pushing for new regulations on Federal Firearm License holders (FFLs) in Chicago. In other words, while street criminals and gang members gun down innocents on the streets, Emanuel wants to go after gun dealers who have gone through the proper legal channels to get an FFL and who are required by federal law to conduct a background check on every gun they sell.

AWR Hawkins is the Second Amendment columnist for Breitbart News and host of Bullets with AWR Hawkins, a Breitbart News podcast. He is also the political analyst for Armed American Radio. Follow him on Twitter: @AWRHawkins. Reach him directly at [email protected]