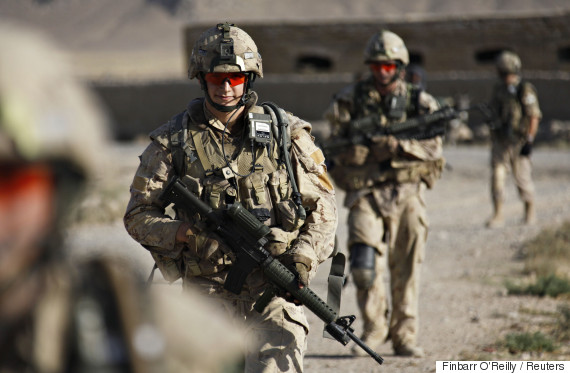 A registered “charity” with buckets of donations from arms manufacturers and other corporate sources is aggressively trying to push Canadian foreign policy further towards militarism and the use of violence.

And the right-wing Canadian Global Affairs Institute seems to be growing in influence, or at least media prominence.

Since last month’s federal budget, senior CGAI analyst David Perry has been quoted throughout the media arguing for increased military spending. “I’m stunned this budget is actually taking money away from the military and pretending to give it back several decades in the future,” Perry told CBC.

In its reports, conferences and commentary, the Calgary-based institute promotes aggressive, militarist positions. In the midst of a wave of criticism towards General Dynamics’s sale of Light Armoured Vehicles to Saudi Arabia, CGAI published a paper titled “Canada and Saudi Arabia: A Deeply Flawed but Necessary Partnership” that defended the $15-billion deal. At least four of the General Dynamics-funded institute’s “fellows” wrote columns justifying the sale, including an opinion Perry published in the Globe and Mail Report on Business titled “Without foreign sales, Canada’s defence industry would not survive.”

Previously, CGAI has called for Ottawa to set up a foreign spy service — think CIA, MI6 or Mossad. At the height of the war in Afghanistan, they commissioned a survey claiming most “Canadians are willing to send troops into danger even if it leads to deaths and injuries as long as they believe in the military’s goals.”

Beyond the media work most think tanks pursue, the institute expends considerable effort influencing news agencies. Since 2002 the institute has operated an annual military journalism course together with the University of Calgary’s Centre for Military and Strategic Studies. A dozen Canadian journalism students receive scholarships to the nine-day program, which includes a media-military theory component and visits to armed forces units.

The stated objective of the course is “to enhance the military education of future Canadian journalists who will report on Canadian military activities.” But that description obscures the political objective. In an article titled “A student’s look inside the military journalism course,” Lola Fakinlede writes:

“Between the excitement of shooting guns, driving in tanks, eating pre-packed lunches, investigating the insides of coyotes and leopards — armoured vehicles, not animals — and visiting the messes, we were learning how the military operates. … Being able to see the human faces behind the uniform, being able to talk to them like regular people, being able to see them start losing the suspicion in their eyes and really start talking candidly to me — that was incredible.” Captain David Williams was forthright concerning the broader political objective of the program. In 2010 he wrote, “The intent of this annual visit has always been to foster a familiarity and mutual understanding between the CF and the future media, two entities which require a symbiotic relationship in order to function.”

Along with the Conference of Defence Associations, the institute gives out the annual Ross Munro Media Award recognizing a “journalist who has made a significant contribution to understanding defence and security issues.” The winner receives a handsome statuette, a gala dinner attended by Ottawa VIPs and a $2,500 prize. The political objective of the award is to reinforce the militarist culture among reporters who cover the subject.

Journalist training, the Ross Munro award and institute reports/commentators are a positive way of shaping the discussion of military matters. But CGAI also employs a stick. In detailing an attack against colleague Lee Berthiaume, Ottawa Citizen military reporter David Pugliese pointed out that it’s “not uncommon for the site to launch personal attacks on journalists covering defence issues. It seems some CDFAI [CGAI’s predecessor] ‘fellows’ don’t like journalists who ask the government or the Department of National Defence too many probing questions. … Last year I had one of the CDFAI ‘fellows’ write one of the editors at the Citizen to complain about my lack of professionalism on a particular issue. … The smear attempt was all done behind my back but I found out about it. That little stunt backfired big time when I showed the Citizen editor that the CDFAI ‘fellow’ had fabricated his claims about me.”

The institute has received financial backing from arms contractors.

While it may not have succeeded in this instance, online criticism and complaints to journalists’ superiors do have an impact. If pursued consistently this type of “flack” drives journalists to avoid topics or be more cautious when covering an issue.

While not exactly forthcoming about its funders, the institute has received some military backing. The Canadian Forces identified CGAI’s predecessor, the Canadian Defence and Foreign Affairs Institute, under the rubric of “defence-related organization and defence and foreign policy think tanks.” DND’s Security and Defence Forum provided funding to individuals who pursued a year-long internship with the Institute and CGAI has held numerous joint symposiums with DND, NATO and NORAD. A bastion of pro-corporate, militarist, thinking, the Canadian Global Affairs Institute is increasingly influential in shaping the foreign policy discussion in this country.

Canadians who disagree with militarism, who wish for diplomacy over war, and who support a Do Unto Others as We Would Have Them Do Unto Us foreign policy must raise their voices loudly and clearly so that we, too, are heard by government.