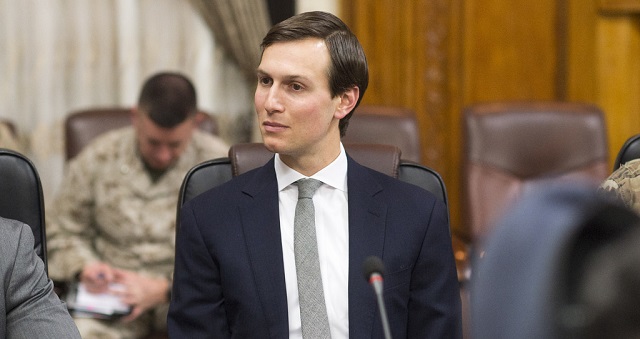 ‘This Is Not the Story We Want’: Reporters Chased Out of Meeting with Kushner Family Pitching Chinese Investors

A public relations aide told reporters they were disturbing the “stability” of the program.

Reporters attempting to cover a pitch to wealthy Chinese investors at a seminar on visas from members of Trump son-in-law Jared Kushner’s family were abruptly ejected from the event, reports the Washington Post.

On Saturday, a woman identified as “Jared’s sister” — believed to be Nicole Kushner — met with possible investors in a Beijing Ritz-Carlton ballroom to sell them on investing hundreds of thousands of dollars in a real estate deal in New Jersey with the promise of what is known an investor visa.

The visa, officially called EB-5 (or more commonly as the “golden visa”), permits wealthy foreign business people to invest in job creating projects in the U.S. — paving the way for immigrating to America.

Reporters alerted to the Bejing event, billed by host Chinese company Qiaowa in their brochures as “Invest $500,000 and immigrate to the United States,” were quickly ushered out as the event started and Kushner’s sister began her sales pitch.

According to the Post, reporters who had initially been seated at the very back of the ballroom were told they would have to leave by a public relations aide saying foreign reporters were disturbing the “stability” of the program. One reporter had their backpack and phone grabbed by an event organizer as reporters were blocked from asking event attendees questions as they exited the ballroom.

Asked why reporters were booted, a public relations aide stated, “This is not the story we want.”

The Kushner family has already been under the microscope for cashing in on the reputation of Jared Kushner, husband of Trump daughter Ivanka, since he became an adviser to the President. Recently, a Chinese insurance company backed out of an investment opportunity with Kushner’s family to help redevelop their troubled office building at 666 Fifth Ave.

Tom Boggioni is a writer in San Diego, Calif.