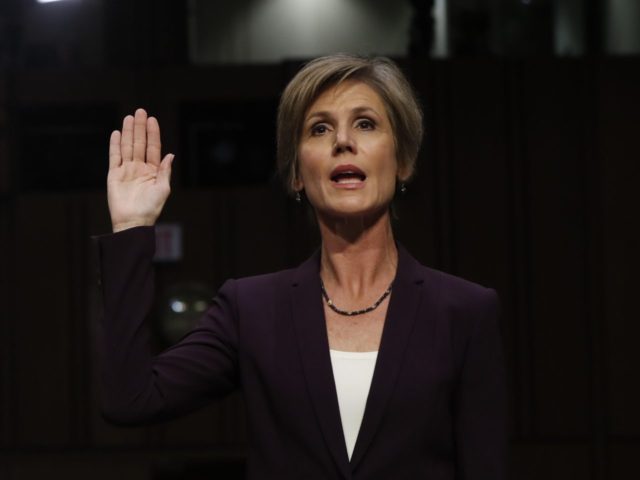 Senator Kennedy to Sally Yates: ‘Who Appointed You to the Supreme Court?’

Yates told the Senate Judiciary Committee that her decision was made “not purely as a policy matter,” but suggested that she had been guided by “statements” that were made “contemporaneously or prior” to the order.

She did not specify which statements she meant, but several of the judges who have blocked the executive order — and its less ambitious successor — have referred to statements made by Trump on the campaign trail about a “Muslim ban.”

Under questioning, Yates admitted that “people of goodwill can make different decisions about this” — having just argued, moments before, that the conclusion of the Department of Justice’s Office of Legal Counsel was so wrong that it had to be overruled.

Sen. John Cornyn (R-TX) was the first to question Yates:

Yates: Yes, they did. The Office of —

Cornyn: And you overruled them?

Yates: I did. The Office of Legal —

Cornyn: What is your authority to overrule the office of legal counsel whether it comes to a legal determination?

Cornyn: Well, Ms. Yates, I thought the Department of Justice had a long-standing tradition of defending a presidential action in court if there are reasonable arguments in its favor regardless whether they may prove to be ultimately persuasive — which, of course, is up to the courts to decide and not you, correct?

Cornyn: You distinguish “the truth” from “lawful”?

Yates: Yes, because in this instance, in looking at what the intent was of the executive order, which was derived, in part, from an analysis of facts outside the face of the order, that is part of what led to our conclusion that it was not lawful, yes.

Cornyn: Well, Mrs. Yates, you had a distinguished career for 27 years at the Department of Justice. And I voted for your confirmation because I believe you had a distinguished career. And I have to tell you that I find it enormously disappointing that you somehow vetoed the decision of the Office of Legal Counsel with regard to the lawfulness of the president’s order, and decided instead that you would countermand the executive order of the President of the United States because you happen to disagree with it as a policy matter. I just have to say that.

Yates: I appreciate that, Senator. And let me make one thing clear. It was not purely as a policy matter. And in fact, I remember my confirmation hearing. And in an exchange that I had with you, and others of your colleagues, where you specifically asked me in that hearing that if the president asked me to do something that was unlawful or unconstitutional, and one of your colleagues — or even that would reflect poorly on the Department of Justice, would I say no? And I looked at this. I made a determination that I believed that it was unlawful. I also thought that it was inconsistent with the principles of the Department of Justice. And I said no. And that’s what I promised you I would do. And That’s what I did.

Sen. Dick Durbin (D-IL) rode to Yates’s rescue, citing three federal courts that had agreed with Yates, blocking the executive order on the grounds that it was improperly motivated by religious discrimination.

Durbin did not mention, however, that a federal judge in Boston had declined to block the executive order, ruling that the president was well within his authority, and that the order satisfied the legal standard of “rational basis” review:

Here, the President has exercised his broad authority under 8 U.S.C. § 1182(f) to suspend entry of certain aliens purportedly in order to ensure that resources are available to review screening procedures and that adequate standards are in place to protect against terrorist attacks.

Under questioning from Sen. Ted Cruz (R-TX), Yates said that the statute authorizing Trump’s executive order was superseded by a later statute prohibiting religious discrimination, and that the fundamental issue was the constitutionality of the order.

Cruz replied that the Department of Justice’s Office of Legal Counsel (OLC) had reviewed the executive order for its lawfulness. Yates said she was not convinced that the order was lawful, and she had to look “outside the face of the document.”

“It was appropriate for us to look at the intent behind the president’s actions,” Yates said.

Later, however, she allowed: “People of goodwill can make different decisions about this.” How that squared with her earlier argument that arguments in favor of the executive order were not based on truth, she did not explain.

Sen. John Kennedy (R-LA) asked her to clarify, and Yates said that she would have had to argue that the intent had not been discriminatory, which she did not believe that she could do. Sen. Kennedy then asked whether she would have declined to defend an act of Congress that used exactly the same language, and she said yes.

She cited the previous example of the Department of Justice declining to defend the Defense of Marriage Act. Sen. Kennedy pointed out that that had been a political decision.

“Who appointed you to the United States Supreme Court?” Kennedy asked.

Yates also did not explain why she had chosen to veto the executive order, rather than resigning. President Trump later fired her.

Joel B. Pollak is Senior Editor-at-Large at Breitbart News. He was named one of the “most influential” people in news media in 2016. He is the co-author of How Trump Won: The Inside Story of a Revolution, is available from Regnery. Follow him on Twitter at @joelpollak.