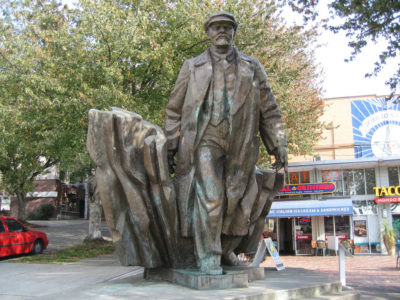 Critics of the decision to remove several Confederate monuments in New Orleans are pointing to offensive communist monuments in places like Seattle that are protected for their intrinsic value.

The comparison came from opponents of New Orleans Mayor Mitch Landrieu’s recent decision to move forward on the City Council’s 2015 vote to remove statues of Robert E. Lee, Jefferson Davis, and P.T. Beauregard, as well as a granite obelisk the mayor dubbed “symbols of white supremacy.”

While writing about the removal of the New Orleans monuments, right-wing media site NewsBusters relayed a reader’s comment comparing the four removed statues to the Lenin statue in Fremont, the irreverent, artsy North Seattle neighborhood and self-proclaimed “Center of the Universe.”

The cast bronze sculpture of Lenin, which is designed to make him appear as a revolutionary, was found in a scrapyard in Europe by a Washington English teacher who paid to transport it to the United States. The teacher, Lewis Carpenter, could not convince his hometown of Issaquah to display the statue, but Seattle sculptor Peter Bevis arranged to have it displayed in Fremont as the now deceased Carpenter’s family attempts to sell it for $250,000, according to the news site.

Lenin was a communist dictator who ran Russia from 1917 until his death in 1924, a time during which an estimated 9 million died due to war, terror and famine tied to his radical policies, according to “Source List and Detailed Death Tolls for the Primary Megadeths of the Twentieth Century.”

The larger-than-life, 7-ton Lenin statue was unveiled in Fremont in 1995, and met immediate resistance.

“This is highly inappropriate in this community,” local artist Frederick Edelblut complained to SeattlePI at the time. “It’s not a piece of art. It’s a disgrace, a … symbol of denigration, and a symbol of millions of people who have died in Eastern Europe from communist domination.”

Over the years, the statue has been painted red to convey the blood on Lenin’s hands, and repeatedly vandalized by graffiti. But it still stands in the center of town, held in trust by the Fremont Chamber of Commerce, KOMO reports.

Bevis insists the Lenin sculpture isn’t about his wild political views or the millions who suffered and died during his regime. Rather, it’s a testament that “art outlives politics,” he told the news site.

The city’s official website is evidence that local leaders stand behind Bevis.

“This sculpture is placed her in the Artist’s Republic of Fremont, as a symbol of an artistic spirit that outlasts regimes and ideologies, and as tangible proof that art does outlive politics,” according to the site.