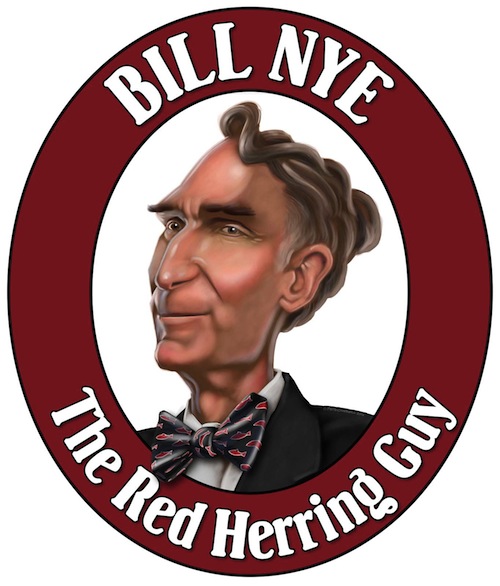 SCIENCE means telling the whole truth – not just the parts you like.

Bill Whittle’s Firewall is back, and this time Bill turns his devastating logic on target Bill Nye the (purported) Science Guy and

A couple of weeks ago, one segment of BILL NYE SAVES THE WORLD premiered on Netflix. Here’s Bill Nye, the Science Guy, presenting some science by Bill Nye:

Thank God for SCIENCE, and a sixty-one-year-old dressed like Pee We Herman only without the fashion sense laying down the phat science beats with DJ Seahorse.

BILL NYE SAVES THE WORLD also lectures us on other things, but the one thing that Bill Nye – and all of the other sex junk-junk-junk peddling progressives – are REALLY lecturing us about is our lack of respect for SCIENCE. You see, we conservatives are too just plain stupid to understand the nuanced complexities of scientific concepts such as this. It’s beyond our limited comprehension.

Bill Nye has a YouTube video describing what would happen if all the ice on the earth were to melt. And folks, it’s not pretty. Is this our future in twenty years? Fifty? Well, it turns out that National Geographic says this process would take FIVE THOUSAND YEARS. You know: from the birth of Christ, to today, then back to the birth of Christ and then halfway back again. They left that part out of the video. And given the effect that half a century of Bill Nye’s uninterrupted progressive policies have had on America’s cities, I’m not sure places like Detroit and Chicago and Newark are going to be inhabited in FIVE years, let alone 5,000.

This chart from NOAA – which my primitive, non science-guy mind dimly grasps as one of the two or three data sets that all of their conclusions come from, says that sea levels are rising at – My God, look at that rate! What’s the scale on the left? Feet of water? Miles? Oh, wait: it’s millimeters. 3 millimeters a year.

Three millimeters a year. That means in one hundred years – I wish a science guy was here to check my numbers – we’ll be up by… 300 millimeters. 11.8 inches. That’s almost a foot! During the last century, sea levels rose by an average of 1.8 mm per year. 7 inches. We managed to deal with 7 inches using wooden cartwheels and sandbags; the thought of coping with 12 inches in an age of nuclear power, hydraulics and reinforced concrete at the very beginning of the next century of technological and engineering progress is clearly climate denial insanity.

And I’m also a bit confused about KANSAS.

SCIENCE tells us that during the late Cretaceous period – around eighty million years ago – KANSAS was directly under the Western Interior Seaway: a vast, inland ocean: 2,000 miles long, 600 miles wide, and 2,500 feet deep.

And 80 million years ago, Kansas wasn’t just grass: there were plesiosaurs and masses of fish in the ocean; terra-saurs in the air; and T-Rex, and triceratops and velociraptors on the balmy shores of Nebraska.

Now here’s where I get confused. Current CO2 levels are about 400 parts per million, and we’re told that if they get to 450ppm our children will burst into flames, and then drown.

So. Eighty million years ago, Kansas was under 2,500 feet of water…

But! Eighty THOUSAND YEARS AGO, Kansas was not under a half mile of water. Kansas was under two miles of ICE. CO2 levels fell to about 180 parts per million. That‘s roughly the all-time low.

Now, I don’t want to live under a half mile of water, and I don’t want to try commute to work under two miles of ice, either. But I taught astronomy for twenty years and I’ve been a technician in a geochronology lab using thermoluminescance to date pottery shards, so while I might not be a climate scientist (and neither is Bill Nye, who has a degree in Mechanical Engineering) I know what science looks like.

See, this video isn’t about temperatures. It’s about the fundamental integrity of science being weaponized into POLITICS.  REAL science is based on repeatability of experiments, control testing and PERPETUAL skepticism, versus appeals to authority and moving political levers by leaving out certain things – like 5000 years to melt all the ice IF the temperature was to rise from an average of about 57 Fahrenheit up to about 84 degrees. Telling half the truth is not  “science.” It’s fraud – it’s showing New York underwater without saying “in five thousand years” because five thousand years AGO, TROY was a city on the coast, not New York, and the ancient city of Babylon was 800 years IN THE FUTURE.

So here’s a couple of science questions, science guys.

Whose factories and auto emissions got CO2 to two and a half times current levels 80 million years ago?

And how did CO2 levels go from a Cambrian high of 7000 parts per million to a Quarternary low of 180 without Bill Nye, Al Gore, Leonardo DiCaprio and other Science guys making big bucks by saving the Planet?

Hey, speaking of Leo, here he is holding a sign that says CLIMATE CHANGE IS REAL. Well NO SHIT SHERLOCK!

Al Gore and all the rest sold the American people – and the entire world – THIS: pretty much stable temperatures, then a drastic, unprecedented rise corresponding to fossil fuel use. This chart they used goes back A THOUSAND YEARS. Wow.

Here’s a world temperature chart that goes back ELEVEN THOUSAND years. The red bar is the length of the hockey stick sample that got this ball rolling. Temperatures have been in constant flux for the last 11,000 years.

And for the last 4.6 BILLION years. The blue line here is temperature; the purple is CO2 levels.

Now I’ll say this very slowly for people like Bill and Al and Leo: I’m not denying that has been getting warmer. When the line goes up, that means it is getting warmer. When the line goes down, it is getting colder. Now there’s a scientific term for this delta – this rise and fall of temperature – and that scientific term is called “change.” Constant, rhythmic climate change, and NOTHING BUT constant, rhythmic climate change, going back not a thousand years, but 4.6 BILLION years..

Now God knows I’m not a science guy. I’m just a REGULAR guy ,whose only real mental gifts are the ability to add, subtract and to read.

But here’s the thing, science, guys: SCIENCE means telling the whole truth – not just the parts you like.

Bill Nye says in his video that losing the bright white ice caps makes the Earth darker and it warms even more. That’s true. But through some oversight he forget to add that as it warms, more water evaporates and the missing bright white ice caps are replaced by an increase in the amount of bright white clouds, closer to the equator where things are warmest.

Just last night, by a very happy coincidence, I heard the super-progressive BBC discussing climate change with a climate scientist who said that up until 2012, there had been no reliable data for the amount of trees in what’s known as a DRY FOREST HABITAT. Finally, using satellite imaging, they started to get real data, and then a little over a year ago they realized that there were more dry forest trees than they had assumed there were when they built their computer models.

How much more? Five percent? Ten? Well, it turns out that there are FORTY PERCENT more trees in the dry forests than they thought when they made a guess – that’s almost half again more green, cheap, FREE CO2 scrubbers in dry forest environments than originally thought. How big are the Earth’s dry forests? Well, they are in YELLOW on this map. Almost half again more trees in the yellow areas, now that we have actually measured it rather than estimated it.

You’ll be relieved to know that this actual data increase of 40% will be fed into the climate computer models.

The idea of FIGHTING CLIMATE CHANGE is not science – it’s a non sequiter, an indication that your data does not back up your politics. The climate is always changing. It’s like warning us about DAYLIGHT CHANGE because the sun is getting closer to the horizon. True, but there’s more to the story. Isn’t there?

Now, this is a perfect example of how the left works. They tell half of the story because they do not trust the American people with ANYTHING. Skepticism, you left-wing fascist idiots, is in fact THE ENTIRE CORNERSTONE of the scientific method – that’s why we have to have reproducible experiments, control groups, and all the rest. Science – REAL science, not science guy science – is the process of using any and all data available to DESTROY a theory. The ideas that cannot be experimentally destroyed are probably TRUE. That’s SCIENCE, and not just saying the atmosphere does not match my computer model so THE ATMOSPHERE MUST BE WRONG.

So maybe we don’t need Bill Nye to SAVE THE PLANET. Maybe this four and a half billion year old graph tells us that temperatures do fluctuate, constantly – but you will notice that there is an upper and lower limit – going all the way back to the creation of the planet – and not a runaway spike up into a perpetual molten slag heap or down to an eternal ball of ice. Maybe life on Earth is here, and remains here, because things like cloud cover and vegetation growth are in fact natural and extremely effective natural feedback mechanisms – which would mean that the Earth has no need of Bill Nye, nor progressives at all for that matter, to SAVE THE PLANET because the Earth is built in such a way that IT KNOWS HOW TO SAVE ITSELF.