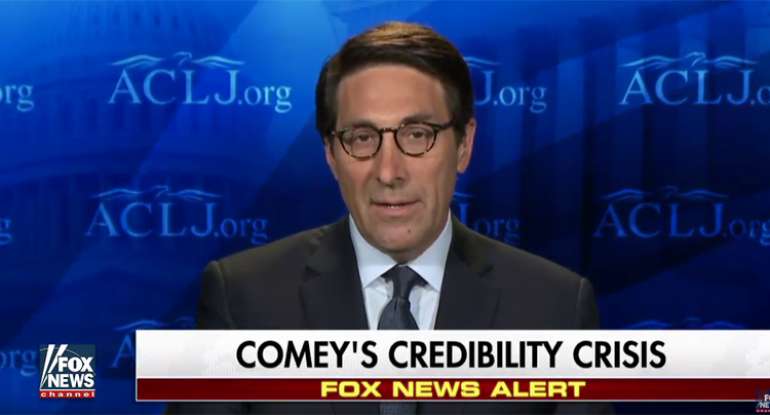 Jay Sekulow, the Chief Counsel for the American Center for Law and Justice, said Friday that former FBI director James Comey admitted under oath that he committed a crime when he testified before the Senate Thursday.

In an op-ed at Fox News Sekulow called Comey the “leaker-in-chief.”

Not only did Comey’s testimony clear President Trump – admitting under oath that the President was not under any investigation – his testimony unmasked Comey’s real motivation in all of this.

It was a stunning revelation.  Comey – the nation’s top intelligence official – admitted under oath that he leaked privileged documents to a friend to give to reporters at the New York Times. Memos that he had written in the course of his official government duties about privileged conversations with the President. The reason:  Comey testified that he did so to manipulate the situation and force the appointment of a Special Counsel. (And, as we know – that’s ultimately what occurred.)

That’s right – the Director of the Federal Bureau of Investigations admits to being the leaker-in-chief – taking it upon himself to do what others are being prosecuted for – leaking information in order to damage the President and the Trump Administration.

Comey’s admission that he is a leaker also raises serious legal questions.  In my view, Comey broke the law: 18 U.S.C. § 641 provides that it is a federal crime to, without authority, convey a record of the United States, in this case an FBI record he admits under oath he leaked after being fired.

“Let’s look at what took place here,” Sekulow told Fox host Sean Hannity Friday evening. “The director of the Federal Bureau of Investigation has a meeting with the president of the United States. He takes notes from those meetings. He does not release them to anyone purportedly at that time. He puts them in the drawer of his office, I guess. He does this, by the way, according to his testimony, in his FBI vehicle, on an FBI computer, and he just saves it — just puts in a drawer — I’m gonna save it for later. Later, [it] comes out because he gets terminated.”

Sekulow pointed out that lots of people were calling on the president to fire Comey.

“Left and right were calling for his termination,” he said. “We were for a year — in the middle of the election — what he did was outrageous.”

Sekulow described what happened next.

“He sends the memo to a friend of his — who by the way was a consultant to the Department of Justice — to leak it to the New York Times.”

Sekulow noted that according to Comey, he did it because the president had tweeted that their conversations may have been taped.

“Here’s the real issue,” he continued. “The contents of that memo, the substance of it, anyways, was already reported in the New York Times the day before the president tweeted anything. And then, Sean, he goes under oath and says ‘I did this to get a special counsel’ — which by the way — is impaneled the next day!”

He said that any FBI agent who leaked a memo like that to the media would go to jail.

Gregg Jarrett, a Fox News host and attorney, also argued that Comey is in legal jeopardy because the memos were government property.

“Comey said these were his personal documents. No, they’re not!” Jarrett exclaimed. “They’re government property. Just read the Federal Records Act and the Record Management Act and the Privacy Act — which is actually published on the FBI website.”

Jarrett said Code 641 “makes it a crime to convert government property and convey it to somebody else. That’s punishable by ten years behind bars.” He added, “in addition to that, he signed a non-disclosure agreement that said, ‘I will not disclose records or raw data.’ Well, he did precisely that.”

He added that the government could sue Comey for money damages if he broke the contract and he could be criminally prosecuted. And it “doesn’t matter that he’s been fired and is no longer the director.”

Jarrett also wrote an op-ed on the Fox News website reacting to Comey’s testimony. He said that while Comey may not ever be charged, his leak was “sleazy” and “disgraceful.”

Under 18 USC 793 (“Leaking Non-Classified Information”), it is a crime punishable by up to 10 years imprisonment to “willfully communicate or transmit national defense information,” even though it is not classified.  While the contents of the memo do not deal directly with national defense matters, the overall investigation does.  So it is debatable whether Comey could be charged.

If nothing else, Comey’s leak appears to be a rather sleazy tactic designed to harm the president.  How can he justify publicizing his own self-serving narrative while admitting in his testimony that he resisted all attempts by the president to publicize the truth that Trump was not personally under investigation?  He cannot.

It is equally disgraceful that Comey appears to have purposefully written his memo as an unclassified document so that he could later use it to his advantage by leaking it to the public without committing a serious crime.  Making it classified, he told the committee, “would tangle it up.”  In other words, he manipulated the classification system to exploit the political damage his document might cause.