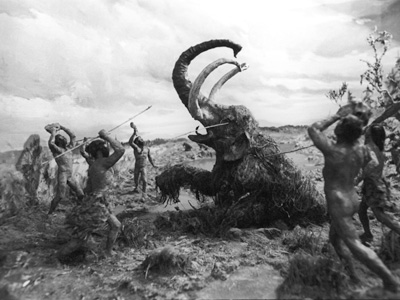 Europeans may have been the first people to settle in America, possibly more than ten thousand years before anyone else set foot there.

­A series of European-style tools dating from twenty-six-thousand to nineteen-thousand years ago have been discovered in six separate locations along the east coast of the United States.

Archaeologists previously thought that America was populated by migrants making their way from Siberia to Alaska, and then spreading through the rest of the continent.

But the first of these Asian tribes started moving there about 15,500 years ago – and there is no evidence of human activity in Siberia or Alaska from before that time.

Professors Dennis Stanford and Bruce Bradford, the two archaeologists who made the discovery, suggest Europeans moved across the Atlantic during the peak of Ice Age.

At the time, a vast tranche of ice covered the Atlantic. The Stone Age migrants would have been able to survive the journey by killing seals, hunting the now-extinct great auks (a sort of giant penguin) and fishing. The archaeologists suggest they may have even used boats for large parts of their travel.

Further evidence of their thesis is a knife discovered in Virginia in 1971. Recent tests showed that it was made from French flint.

The new hypothesis is unlikely to change what we know about the Indians who greeted the Europeans upon their arrival.

The Siberian migrants came to America for longer and in greater numbers, and were either wiped out or absorbed by the European tribes.

But it does explain the long-standing mystery of the genetic code and language of some Native American tribes that appear European, not Asian in origin.

Further digs are planned deeper inland up to Texas this year, and will help historians and archaeologists understand just how far the original European colonization went.