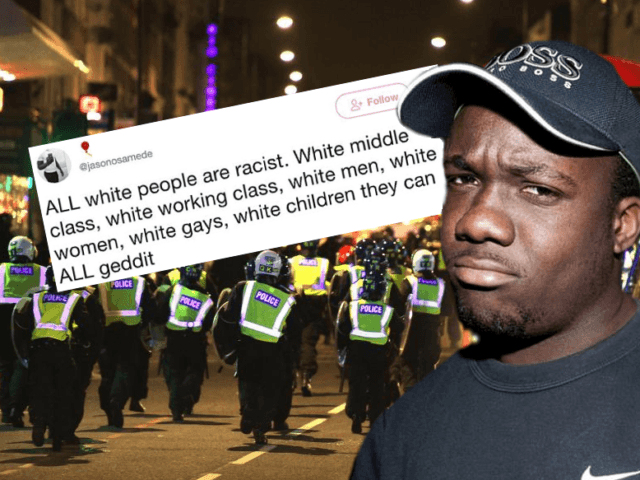 Granted space for a mainstream media opinion piece in the left-liberal Guardian newspaper, Jason Osamede Okundaye pooh-poohed “headlines [making] allegations that I believe all individual white people ‘are racist’, insinuating that I support violence against white people because of this”.

The Pembroke College Ethnic Minorities Officer tweeted “ALL white people are racist. White middle class, white working class, white men, white women, white gays, white children they can ALL geddit” during the riots in Dalston, London, which followed the death of suspected drug dealer Rashan Jermaine Charles after he swallowed an “object” during an arrest.

But Okundaye insisted that critics had “misconstrued the meaning” of his pronouncements, and taken them out of their “proper context”.

Head of @Cambridge_Uni equality group @jasonosamede clearly has a limited understanding of equality. Not related to #DianeAbbott is he? pic.twitter.com/43lwGpAfpC

“I simply meant to observe that racial prejudice, where it exists, transcends gender, class, sexuality and age,” he claimed. “My experiences as a black gay man facing racism from white gay men have taught me this.”

Okundaye boasted that Cambridgeshire Constabulary — which received a multitude of complaints from members of the public about what they saw as the anti-white, racist character of his tweets — “swiftly dropped an investigation” into him, and accused outlets which accompanied coverage of the story with a picture of him frowning as “perhaps playing into a repetitive media stereotype of the ‘aggressive black man’.”

Okundaye had tweeted “Just catching up on the rioting, excellent stuff, smash everything #NoJusticeNoPeace” during the riots — in which both police and ordinary members of the public were targeted — and many observers saw this as clear incitement to violence.

It seems police must have accepted Okundaye’s explanation that they simply “reflected [his] continued support of those who seek justice in the face of inequality”.

He concluded: “The events of last weekend have highlighted the dangers of speaking out, but, more significantly, the importance of speaking up for social justice, particularly from the perspective of a minority. … Without challenge and diversity of thought, there can be no progress.”