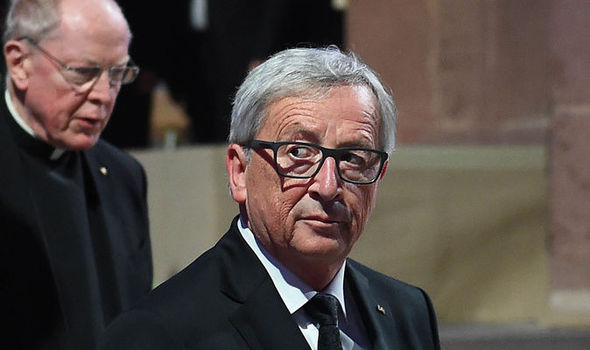 The shock idea was part of Mr Juncker’s pitch for the future of Europe in his State of the European Union speech this morning.Mr Juncker told the European Parliament in Strasbourg: “Europe would function better if we were to merge the presidents of the European Commission and the European Council.“Europe would be easier to understand if one captain was steering the ship.”His proposal would mean consolidating the leadership of the EU Commission, the bloc’s executive branch, with the relatively new position of Council president, who serves as the convenor and coordinator of the bloc’s 28 heads of state and government.

But his radical idea has not been met with open arms.

Former Ukip leader Nigel Farage called it the most “open and honest and truly worrying” speeches he has ever heard from the EU chief and accused him of a European power grab.He said: “The message is very clear: Brexit has happened, new steam ahead. One powerful president for the whole of the EU. A finance minister with fresh powers.“A stronger European army in a militarised European Union. And more Europe in every single direction and all to be done without the consent of the people.