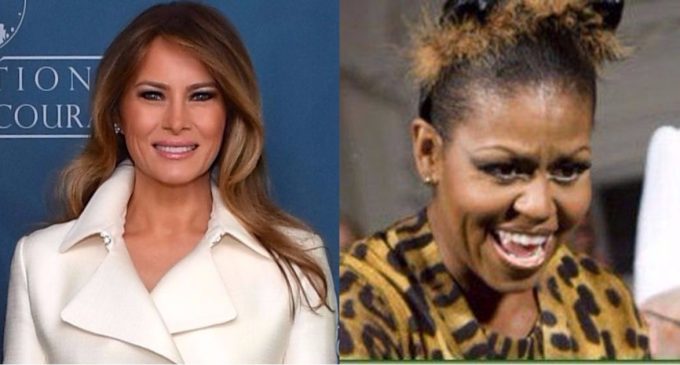 First lady Melania Trump has more or less avoided the spotlight during her husband’s first few months in office, preferring instead to focus on raising their son, Barron Trump.

But she’s still given several important speeches, such as the one she gave at the U.S. Mission to the United Nations on Wednesday, where she stressed the importance of families raising their children to love their country, Fox News reported.

While the first lady’s speech was short, it was powerful.

“Show me the loving bonds between your families today and I will show you the patriotism and moral clarity of your nation tomorrow,” Trump said.

And while she might have been speaking to an international audience, it was clear her remarks were particularly about America, the first country on earth founded on an idea rather than the chances of geography or tribalism.

“If we do not advocate a love of country to our children and the generations to come, then why would our children grow up to fight for our country’s founding principles and moral truth?” she said.

That’s something that former first lady Michelle Obama really didn’t understand, and would hate if she did understand it. After all, it took her husband running for president for Michelle to finally feel proud to be an American.

Newsweek noted that in Frebruary, 2008, Obama stated that “for the first time in my adult life, I am really proud of my country.”

You can watch the full Melania Trump speech below. The section on patriotism begins about the 2:15 mark.

Trump was stating that children must be nurtured and taught to love their country. That way, when they grow up they can become productive members of society who help move their country forward — not bitter, small-minded progressives who take away snacks from small children in the name of “progress.”

Trump also touched on childhood bullying, combating poverty and other problems that affect children these days.

“Together, we must acknowledge that all too often it is the weakest, most innocent and vulnerable among us, our children, who ultimately suffer the most from the challenges that plague our societies. Whether it is drug addiction, bullying, poverty, disease, trafficking, illiteracy, or hunger, it is the children who are hit first and hardest in any country,” she stated.

There was more substance, compassion and patriotism in Trump’s brief speech than was ever displayed during Michelle Obama’s entire time living in the White House.

This is what a real first lady sounds like. I could certainly get used to hearing this for the next four, or eight, years.