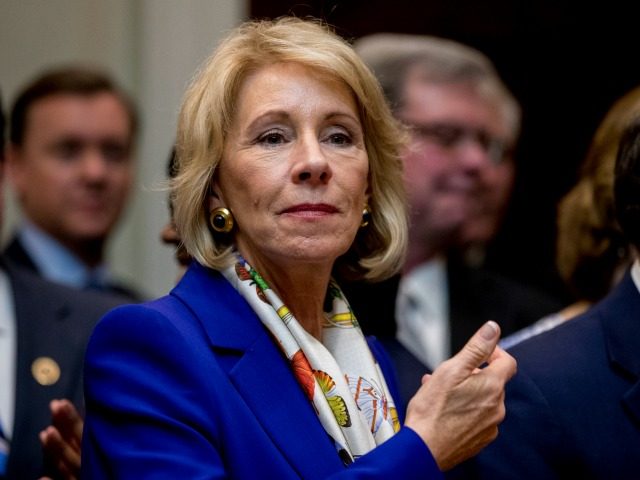 In interim guidance released Friday, U.S. Education Secretary Betsy DeVos ended the campus sexual misconduct policies put forward by former President Barack Obama, stating that, while colleges must continue to combat sexual misconduct on campus, the process must be “fair and impartial,” and inspiring “confidence in its outcomes.”

Following up on her announcement earlier this month that she is scrapping the Obama administration’s policies regarding cases of sexual misconduct on college campuses, DeVos stressed in a new “interim Q & A” that all students must be protected from discrimination in school proceedings to investigate sexual assault allegations.

“The withdrawn documents ignored notice and comment requirements, created a system that lacked basic elements of due process and failed to ensure fundamental fairness,” the education department states.

Moving forward, DeVos’s department plans to solicit comments from stakeholders and members of the public as it prepares new rules for the handling of sexual misconduct cases in schools.

In the coming months, hearing from survivors, campus administrators, parents, students and experts on sexual misconduct will be vital as we work to create a thoughtful rule that will benefit students for years to come. We also will continue to work with schools and community leaders to better address preventing sexual misconduct through education and early intervention.

“As I said earlier this month, the era of rule by letter is over,” DeVos added. “The Department of Education will follow the proper legal procedures to craft a new Title IX regulation that better serves students and schools.”

As Breitbart News reported, in a strong address on September 7, DeVos asserted the Obama administration’s heavy-handed policy – that forced colleges and universities to conduct “kangaroo courts” in dealing with accusations of sexual assault –  has “failed.”

The secretary criticized the Obama administration’s 2011 Dear Colleague letter, in which it sought to end cross-examination of alleged victims by students accused of sexual assault in campus courts and rejected the traditional clear-and-convincing evidence standard of proof in school disciplinary procedures.

The era of “rule by letter” is over.

Through intimidation and coercion, the failed system has clearly pushed schools to overreach. With the heavy hand of Washington tipping the balance of her scale, the sad reality is that Lady Justice is not blind on campuses today.

This unraveling of justice is shameful, it is wholly un-American, and it is anathema to the system of self-governance to which our Founders pledged their lives over 240 years ago.

DeVos made herself clear at the start of her address that “acts of sexual misconduct are reprehensible, disgusting, and unacceptable. They are acts of cowardice and personal weakness, often thinly disguised as strength and power.”

Unlike her predecessors in the Obama administration, however, she gave significant attention to the problem of those students who are accused of sexual assault and denied their due process.

“We need to remember that we’re not just talking about faceless ‘cases,’” the secretary said. “We are talking about people’s lives. Everything we do must recognize this before anything else.”

She said the system put into place by the Obama administration has failed both alleged sexual assault victims and the accused. The secretary addressed the trend the intimidating Obama-era guidance has promoted in which “any perceived offense can become a full-blown Title IX investigation.”

DeVos was condemned by feminists and LGBT activists in July for inviting students to “listening sessions” who have been falsely accused of and disciplined for sexual assault under the Obama-era Title IX guidance.

Under the guidance, the Obama administration instructed schools to use the “preponderance of the evidence standard to resolve complaints of sex discrimination,” which is used in most civil actions.

To promote its policy, Obama’s deputies in the federal education department engaged the media by consistently pushing the myth that “one in five” college-age women in the U.S. will be sexually assaulted before they leave college.

“The agency’s figures are wildly at odds with the official crime statistics,” nevertheless, began a fact-check video with AEI resident scholar and former philosophy professor Christina Hoff Sommers, who studies the politics of gender and feminism.

According to the Bureau of Justice, the real rate of rape on college campuses is actually closer to 1 in 500. However, armed with the false “one in five” statistic, the Obama administration threatened to cut funding to colleges and universities who did not implement the guidance in its Dear Colleague letter.