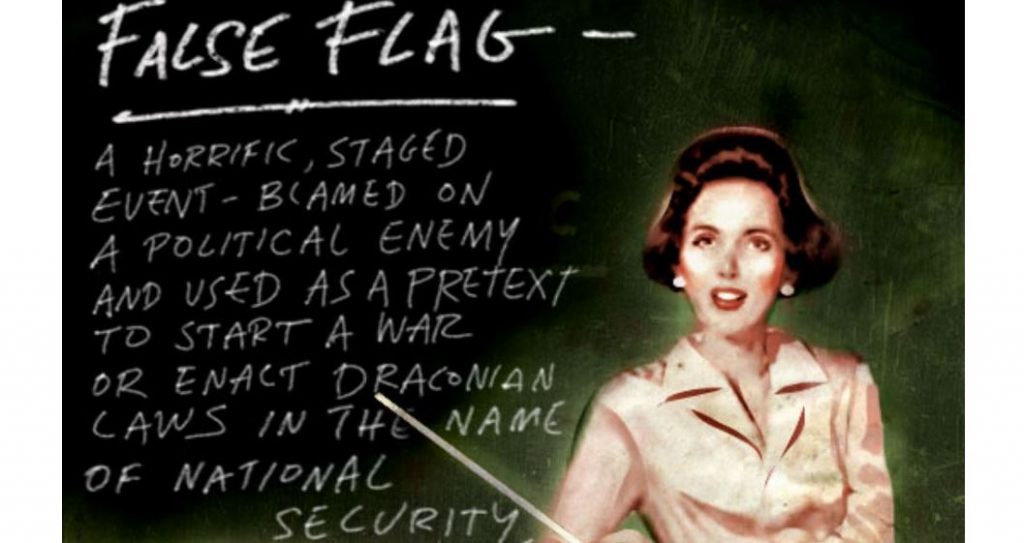 False flags always target the psychological state of mind of the public. Mind control is the goal.

To boil it down, a false flag is an operation staged to blame someone for a crime, someone who didn’t commit the crime.

Simplistic over-exaggerated version: “Last night, a homeless man was found shot dead in an alley. The gun was found next to his body. The Mayor’s fingerprints were on the [planted] gun. The Mayor was arrested at his office. The election nears. The Mayor’s opponent now appears to have a clear path to victory…”

Less simplistic version: “…the worst mass shooting in US history. Stephen Paddock, 64, has been named as the Las Vegas shooter. He is dead. He killed 58 people at a concert and wounded 515 others. In the Congress, calls are rising for new gun control laws…”

But, as it turns out, the evidence suggests there were multiple shooters in the Mandalay Hotel. Paddock may or may not have been one of them. The overall operation was designed to invoke widespread horror and fear, and usher in new restrictions on gun ownership…

The other possible shooters in the hotel would have been professionals, tasked with killing as many people as possible at the country music concert.

Gun control would not be the only agenda in this false flag.

Heavily militarized police all over this country would be another agenda.

Putting a significant dent in the economy would be another—if attendance at public events and in crowded public places diminishes.

Such a reduction in attendance could even affect political forums and other gatherings where free speech and the right to assemble are vital. (We’ve already seen significant disruptions of these events.)

Invoking fear and passivity in the population is another basic agenda. This leads to the attitude: “Let the authorities handle everything.”

We could see new, more outrageous violations of Constitutional search and seizure principles, all in the name of “the need for security.”

As in the aftermath of Sandy Hook, there may be new calls for psychiatric screening of the population, including young children, in order to “spot criminals before they commit crimes.” This is sheer madness, because no so-called mental disorder is based on any defining lab test, and many of the prescribed drugs (SSRI antidepressants) push people over the edge into committing violence. —More violence, more calls for psychiatric screening, more drugs, more violence: an escalating scenario and repeating cycle, leading to tighter Control from above.

When was the last time you saw a major false flag exposed by the mainstream press, and then admitted to by the actual perpetrators, who then explained their true objectives?

False flags are, over the long term, essential to maintaining and expanding the status quo: power is collected and increased at the top, and then exerted downward.

Nevertheless, the background of the purported shooter, Stephen Paddock, gives no indication of any competence with auto weapons, gives no indication he could have dealt with the problems and challenges of using such a weapon—and on top of that, his state of mind at the time, as an non-professional, would have been unstable, to say the least.

Any reasonable law-enforcement group investigating this mass shooting would certainly keep its options open, regarding other perpetrators. But that is not what is happening here. The books are closed on this case. There is no going back.

The desired result has been achieved. One shooter, mass killings. End of story. Objective achieved.

That rush to judgment and “closure” is also a prime feature of the false flag. It has to be.

(To read about Jon’s mega-collection, The Matrix Revealed, click here.)

The author of three explosive collections, THE MATRIX REVEALED, EXIT FROM THE MATRIX, and POWER OUTSIDE THE MATRIX, Jon was a candidate for a US Congressional seat in the 29th District of California. He maintains a consulting practice for private clients, the purpose of which is the expansion of personal creative power. Nominated for a Pulitzer Prize, he has worked as an investigative reporter for 30 years, writing articles on politics, medicine, and health for CBS Healthwatch, LA Weekly, Spin Magazine, Stern, and other newspapers and magazines in the US and Europe. Jon has delivered lectures and seminars on global politics, health, logic, and creative power to audiences around the world. You can sign up for his free NoMoreFakeNews emails here or his free OutsideTheRealityMachine emails here.