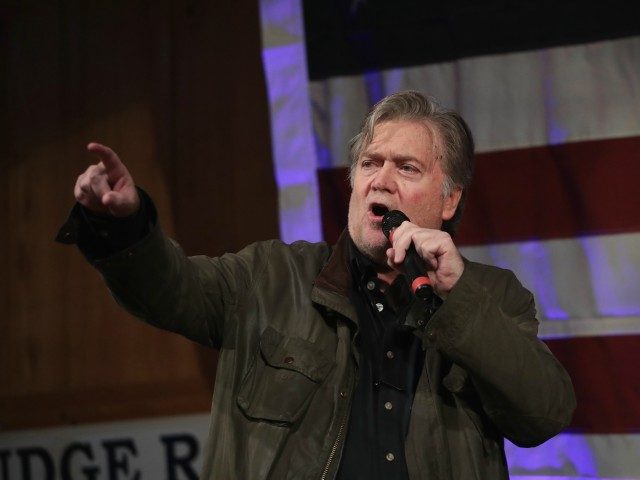 Breitbart News Executive Chairman and former White House Chief Strategist Steve Bannon declared a “season of war” against the GOP establishment in an electrifying speech at the Values Voter Summit Saturday, warning Senate Majority Leader Mitch McConnell: “these folks are coming for you.”

“There’s a time and season for everything, and now it’s a season of war against the GOP establishment,” Bannon told the gathering in Washington, DC. “It’s no longer acceptable to come and pat you on the head and tell you everything’s going to be fine [if you] just get these guys an office.”

Bannon is planning a full-scale assault in the 2018 midterms, reportedly planning challenges on every GOP senator up for re-election (except for Texas Sen. Ted Cruz) and is believed to be eyeing a number of House and gubernatorial races as well.

“This is not my war. This is our war. And y’all didn’t start it. The establishment started it,” he said.

Some of the potential challenges are likely to be seen as long shots, but Bannon has the wind in his sails after Judge Roy Moore beat establishment-backed Sen. Luther Strange (R-AL) in last month’s Alabama Senate primary runoff, despite being outspent 10-1 by forces allied to McConnell.

In his speech Saturday, Bannon basked in that victory and warned McConnell that his position was more precarious than ever.

“Up on Capitol Hill, because I’ve been getting calls, it’s like before the Ides of March. They’re just finding out who’s going to be Brutus to your Julius Caesar,” Bannon said. “Yeah, Mitch, the donors aren’t happy, they’ve all left you.”

He told the crowd that Moore’s victory has spooked the establishment elites as it shows that money doesn’t matter, even going so far as to say that the more money they spend, “the fewer votes they get.”

Bannon warned Republicans who think they can hide from backing President Trump that their failure to support him will haunt them in the midterm primary seasons.

Bannon also argued that the power of the Alabama vote can be shown in recent developments from the White House. He noted that since Moore’s Alabama victory, the Trump administration has issued an executive order on religious freedom, stopped the Obamacare insurance bailouts, pulled the U.S. out of UNESCO, decertified Iran’s compliance with the Iran nuclear deal, and pushed for a middle-class tax cut.

“Those are not random events folks, that is victory begets victory,” he said.  “We owe that to Judge Roy Moore and the good men and women in Alabama because that all came from them.”

He urged Republican lawmakers who were on the fence on Trump to be more vocal in their support of his agenda as a way to avoid the populist storm brewing ahead of the 2018 midterms: “You can come to a stick and say ‘I am not going to vote for Mitch McConnell for Majority Leader’ and you can come to a stick and you can say ‘I’m going to do away with the filibuster so the president can implement his program.’”

“But until that time, they’re coming for you,” he warned.